A British court ruled on Tuesday that the man who threw a milkshake at Brexit Party leader, Nigel Farage, will have to pay him compensation for his suit cleaning.

Paul Crowther assaulted Farage on May 20th with a milkshake during a campaign tour for the Brexit Party in Newcastle, England. Crowther was immediately arrested by authorities and then fired from his job as a technical adviser for the telecoms company Sky. 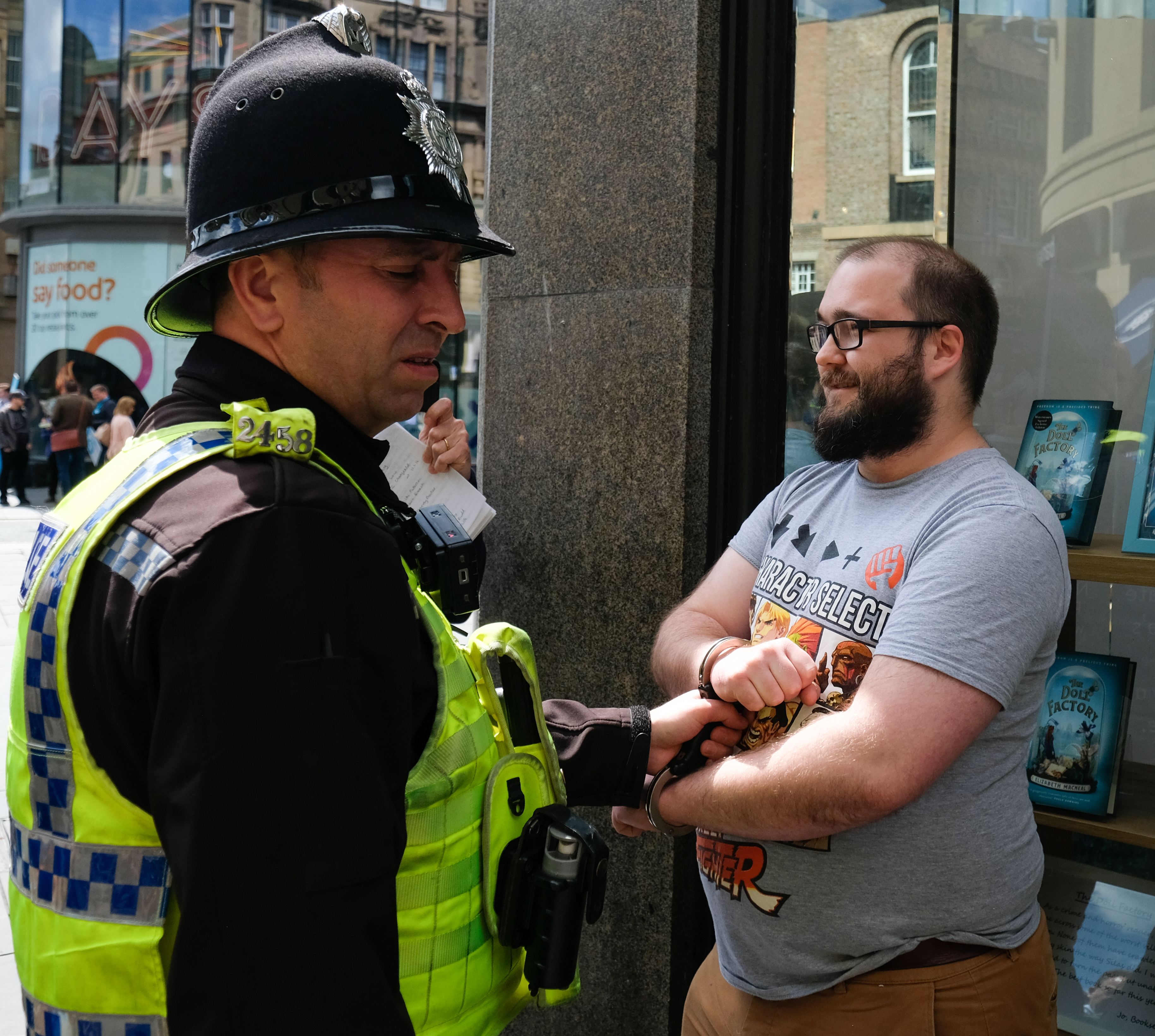 NEWCASTLE-UPON-TYNE, ENGLAND – MAY 20: Paul Crowther (R) is pulled away by security and held by police after throwing what was thought to be milkshake over Brexit Party leader Nigel Farage in Northumberland Street in Newcastle Upon Tyne during a whistle stop UK tour on May 20, 2019 in Newcastle Upon Tyne, England. (Photo by Ian Forsyth/Getty Images)

After he pleaded guilty, Judge Bernard Begley ruled that the defendant would pay Farage £350($438) to cover damages to Farage’s suit and a lapel microphone. Crowther will also have to complete 150 hours of unpaid work.

Begley told Crowther, “This was an act of crass stupidity.”

“While members of the public have the democratic right to engage in peaceful protest, it is wholly appropriate to bring charges in any case where such protests cross the line into criminal behavior,” said Chris Atkinson of the crown prosecution service. “In an open democracy, people should be free to conduct legitimate political campaigns without fear of physical assault.” 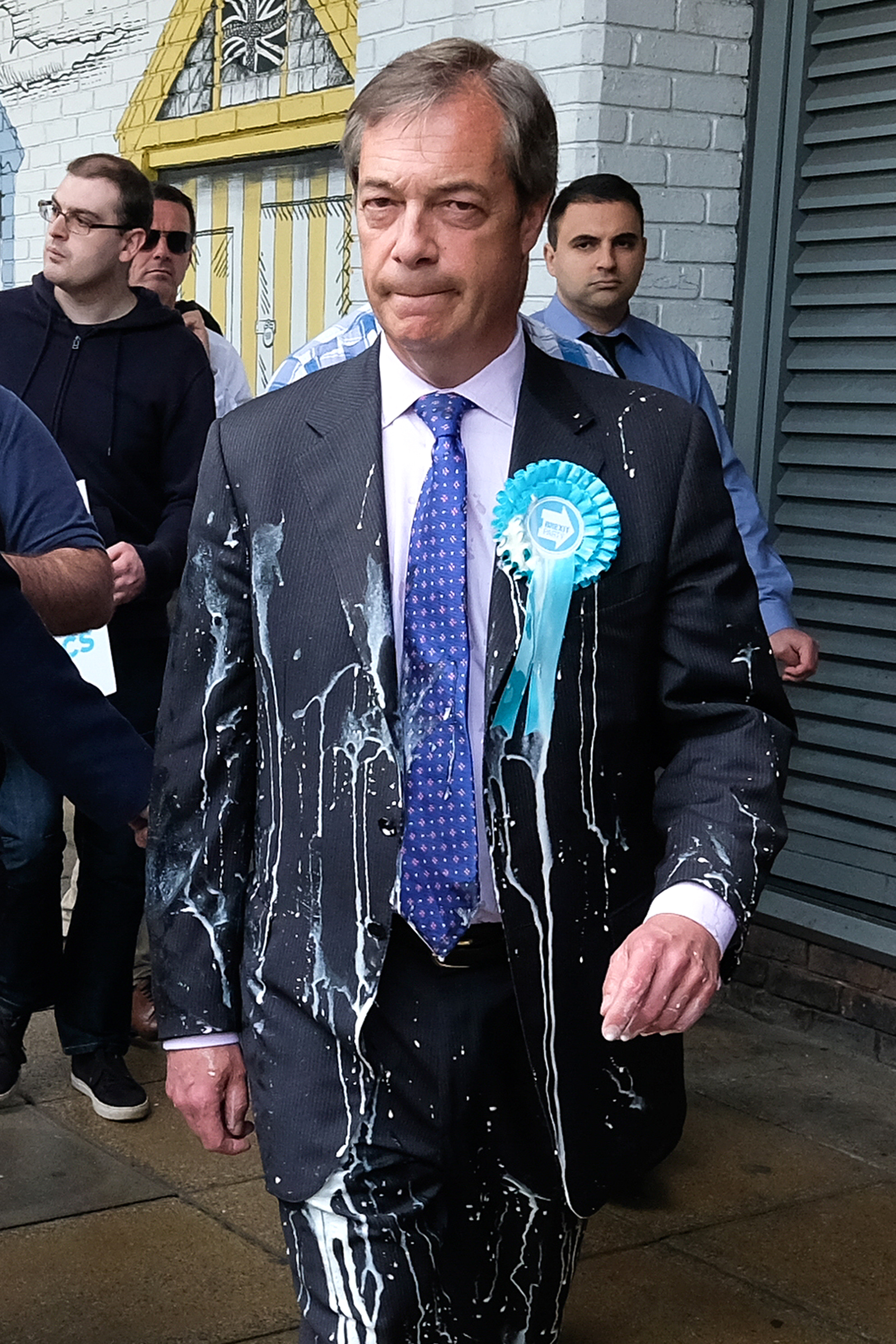 NEWCASTLE-UPON-TYNE, ENGLAND – MAY 20: Brexit Party leader Nigel Farage is escorted to a car after having what is thought to be milkshake thrown over him as he visits Northumberland Street in Newcastle Upon Tyne during a whistle stop UK tour on May 20, 2019 in Newcastle Upon Tyne, England. (Photo by Ian Forsyth/Getty Images)

Farage condemned the attack on Twitter directly after it occurred:

Sadly some remainers have become radicalised, to the extent that normal campaigning is becoming impossible.

For a civilised democracy to work you need the losers consent, politicians not accepting the referendum result have led us to this.

Fortunately for Crowther, he may not have to pay the full £350 from his own pocket. A Gofundme page entitled, “Get Paul Crowther his milkshake money back” has already raised £1,705.

The trend of assaulting conservative right-wing politicians with milkshakes has gained popularity in the United States since the incident.  Just a few weeks ago Republican Florida Rep. Matt Gaetz had a milkshake thrown at him as he left a town hall in Pensacola, Florida. (RELATED: ‘Milkshaking’ Crosses The Pond, Matt Gaetz Gets Doused In Pensacola)

Milkshake them all. Humiliate them at every turn. Make them dread public organizing. https://t.co/myrCSv07Dx pic.twitter.com/7dozYzJoAl

Despite the physical violence Farage faced on the campaign trail, his Brexit Party had a surprising victory in the European Parliamentary elections. The Brexit Party won 32% of the vote and 28 MEPs earning itself the position as one of Britain’s foremost political parties.