Later this month in Jerusalem, National Security Advisor John Bolton will meet with Russian Security Council Secretary Nikolai Patrushev and Israeli National Security Advisor Meir Ben-Shabbat to discuss the situation in Syria. According to some reports, the American and Israeli delegations will press their Russian counterparts to support efforts to limit Iranian military influence inside the country.

The Jerusalem summit comes at a time when there are growing signs of divergence between Russia and Iran. In Syria, the two countries increasingly compete for influence and lucrative government contracts. At the same time, as tensions between the United States and Iran continue to rise, Moscow is warning Tehran against retaliating for Washington exiting Iran nuclear deal by leaving the treaty as well.

Although Russia and Iran are often portrayed as kindred spirits, some Russians analysts argue that the two nations have more fundamental differences than commonly acknowledged.

Nikita Smagin, an expert on Iran at the Russian International Affairs Council, told The Daily Caller that Iran’s regional ambitions are contrary to Russia’s interests in the Middle East. He describes Iran as a country aspiring to become “the dominant power in the region.” Such an objective is problematic for Russia because it believes “that no country can dominate the Middle East and any country who attempts to do so will only make the situation worse.” (RELATED: Iran Warns It Could Stop Complying With 2015 Nuclear Deal)

Furthermore, Smagin states that Moscow is trying to position itself as a “key nonregional mediator” in the Middle East who has a workable relation with everyone, including adversaries of Iran such as Israel and Saudi Arabia. Tehran views this strategy with a certain degree of suspicion. 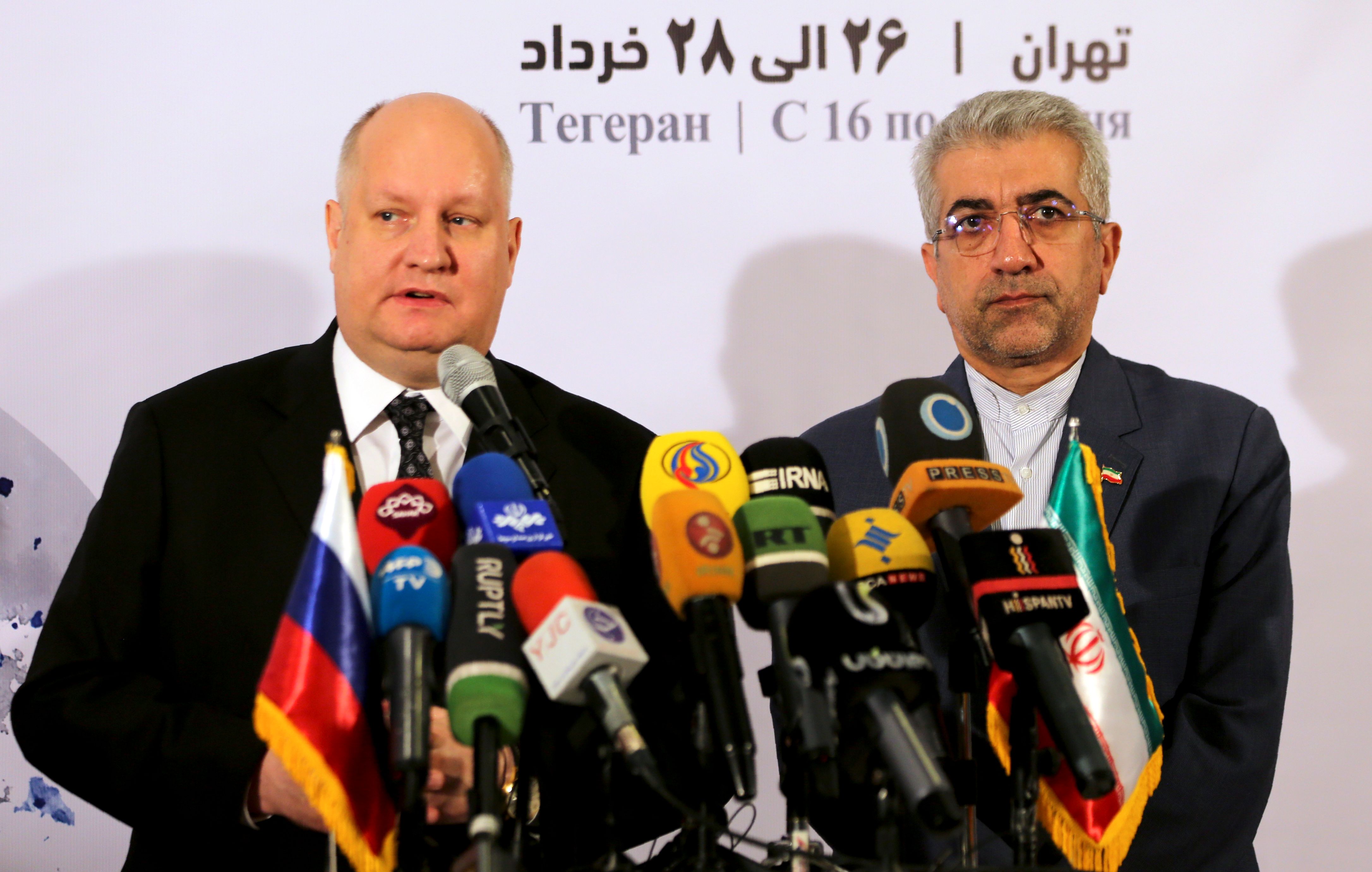 “In the Iranian press you regularly see indignation that Russia declares itself a partner of Iran while at the same time cooperating with Israel and Saudi Arabia,” Smagin said.

Over the past several years, Russia and Iran have worked closely together to help preserve Syrian President Bashar al-Assad’s grip on power. However, with Assad appearing on the brink of victory in Syria’s civil war, his benefactors in Moscow and Tehran now find themselves vying to acquire contracts for reconstruction projects in the war-ravaged country.

Maxim Suchkov, editor of Al-Monitor’s Russia in the Middle East unit, told The Daily Caller that the economic competition between Moscow and Tehran in Syria is not surprising. “Both Russians and Iranians invested in the Syrian campaign, and both want a return on their investments,” he said.

Economic contracts are not only source of tensions between Russia and Iran in Syria. Russia is increasingly showing signs of unease about the scope of Iran’s military presence in the country.

Reports last month that an Iranian oil tanker stopped at Syria’s Banias port sparked anxiety in Moscow that Tehran had aspirations of converting the city into an Iranian naval base. One Russian diplomatic source, told Nezavesimaya Gazeta, a prominent Russian newspaper, “Iran’s activity near Banias may have a destabilizing effect not only for the region, but also for the forces, which are trying to stabilize this region.”

Nezavesimaya Gazeta went on to warn: “Iran’s access to the Mediterranean Sea deprives Russia of its monopoly on economic presence in Syria’s coastal areas and creates certain security risks. The territorial proximity of Iranian facilities, regardless of their purpose, may not only technically complicate life for Russian servicemen, but also put them under surveillance.”

Another issue Russia is concerned about is the structure of the Syrian security apparatus. At present, a significant portion of pro-government forces in Syria consist of militia groups with ties to Tehran. Moscow is worried that if these groups are not properly integrated into the Syrian Armed Forces, Iran could gain a long-term foothold within the Syrian military at Russia’s expense.

“For Russia, it is important that whoever comes after Assad does not have a U-turn on Russian presence in [Syria] and does not kick Moscow out of its military bases,” Suchkov said. 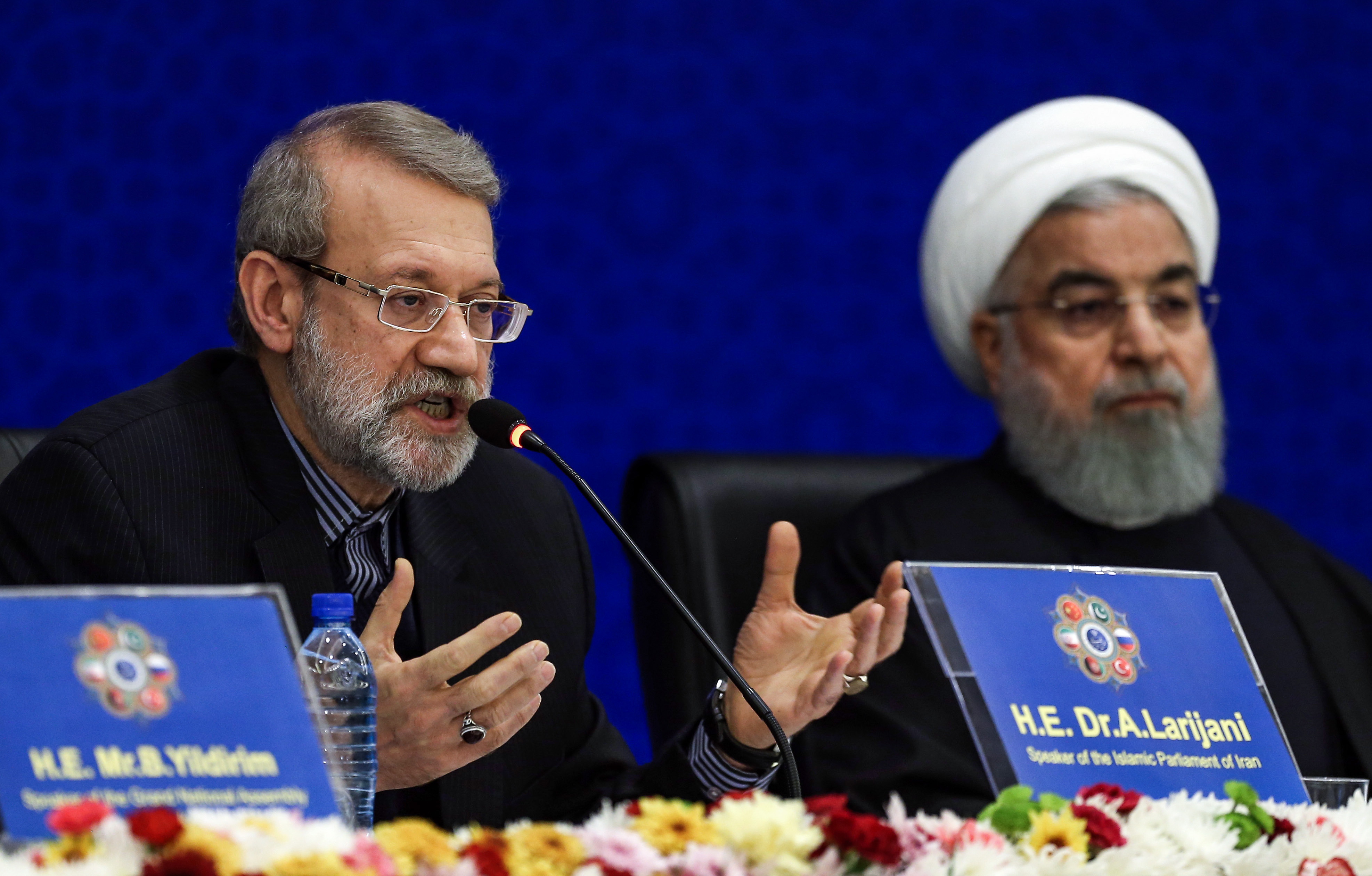 Iran’s Parliament Speaker Ali Larijani (L) speaks while seated next to President Hassan Rouhani, during the 2nd Speaker’s Conference, which includes delegations from Afghanistan, China, Pakistan, Turkey, and Russia and focuses on terrorism and regional cooperation, in the capital Tehrnan on December 8, 2018. – Rouhani said US sanctions were “economic terrorism”, as he sought to foster a united front from visiting regional officials on December 8. Addressing parliament speakers from Afghanistan, China, Pakistan, Russia and Turkey, Rouhani said they had all suffered economic pressure from the US. (Photo by AFP/Getty Images)

Beyond Syria, Russia is trying to restrain Iran’s response to mounting tensions with the United States. Following a May 28 visit to Tehran, Russian Deputy Foreign Minister Sergei Ryabkov described Iran’s growing interest in potentially exiting the nonproliferation treaty as “a qualitatively new step in the direction of destabilization.” He stated that Russia discourages Iran from taking any such “reckless steps.” (RELATED: Cohen Transcripts Further Undermine A Key Point In The Trump-Russia Conspiracy Theory)

Smagin explained that Russia is only willing to do so much for Tehran. He argued that if Iran takes steps that will lead to it becoming further financially isolated from the West, Mocow will not be able to come to the rescue. “Russia cannot and does not want to economically save Iran,” Smagin said.

According to Suchkov, Ryabkov’s statement was meant to signal to Iran that “if you pursue the tactics that Russia frequently pursues, ‘to escalate to deescalate,’ then you are going to be on your own, don’t expect us to cover the front for you.”

As the Jerusalem summit approaches, are all of these forces enough to make Russia receptive to American and Israeli requests about limiting Iranian influence in Syria? Both Smagin and Suchkov think not. They say that while a deal is hypothetically possible if the United States were to offer Russia concessions on Ukraine or to lift some economic sanctions, such a scenario is totally unrealistic and Moscow knows it.

Moreover, both Smagin and Suchkov emphasized that Russia was not in a position to forcefully evict Iranian troops from Syria. Moscow could only bring about a movement of Iranian armed forces away from Israel’s border by negotiating with Tehran.

Thus, it appears likely that John Bolton will leave the meeting with Jerusalem far from satisfied with Russia’s response. If recent events are any guide, Tehran will not have much reason for celebration either.