The mission statement of the Columbia Journalism Review is “to be the intellectual leader in the rapidly changing world of journalism.” Its chairman is the editor-in-chief of Reuters, and it is considered an arbiter of ethics in the journalism profession.

That means it’s important for them to adhere to those same high standards in material published under its auspices. In a piece published last week by Right Wing Watch researcher Jared Holt, they did not.

Holt’s piece, titled, “Right-wing Publications Launder an Anti-journalist Smear Campaign,” was a response to an article I wrote for Quillette, in which I summarized some of my research into the close relationships between journalists covering the far-right and antifa activists known for violence and doxing.

Holt’s article includes a number of rudimentary errors and, either through negligence or malice, he disregarded the interview answers I provided him, as The Daily Caller revealed by publishing my emails with him. Instead he chose to rely upon discredited or apparently non-existent sources. (RELATED: Behind The Columbia Journalism Review’s Hit Job On A Researcher Exposing Antifa-Journalist Connections)

The errors in his piece are substantial and his decision to disregard relevant information that I told him myself, adds up to defamation with substantial professional and personal consequences. Since the publication of the piece, I have been subjected to harassment and my livelihood is under threat. Therefore, I am calling on the CJR to retract the article.

I asked the journal for a retraction, and here is the reply I received from Kyle Pope, their publisher and editor in chief:

Dr. Lenihan,
Thanks for writing. We are going to decline your request to retract the piece. If, however, you would like to write a letter for publication outlining your grievances, we’d happily consider it.
Thanks,
Kyle Pope

Let’s go through all the reasons why the CJR’s piece should be retracted. In his opening paragraph Holt states that I, Eoin Lenihan, am a “far-right social media user” and “an established right-wing troll.” He states definitively that I am not an online extremism researcher and that I have “no affiliation with any previously known organisation that researches extremism.” He even claims that I am using my research as cover for the supposed reality that I am a far-right figure. That is a major claim for the CJR to put into print. 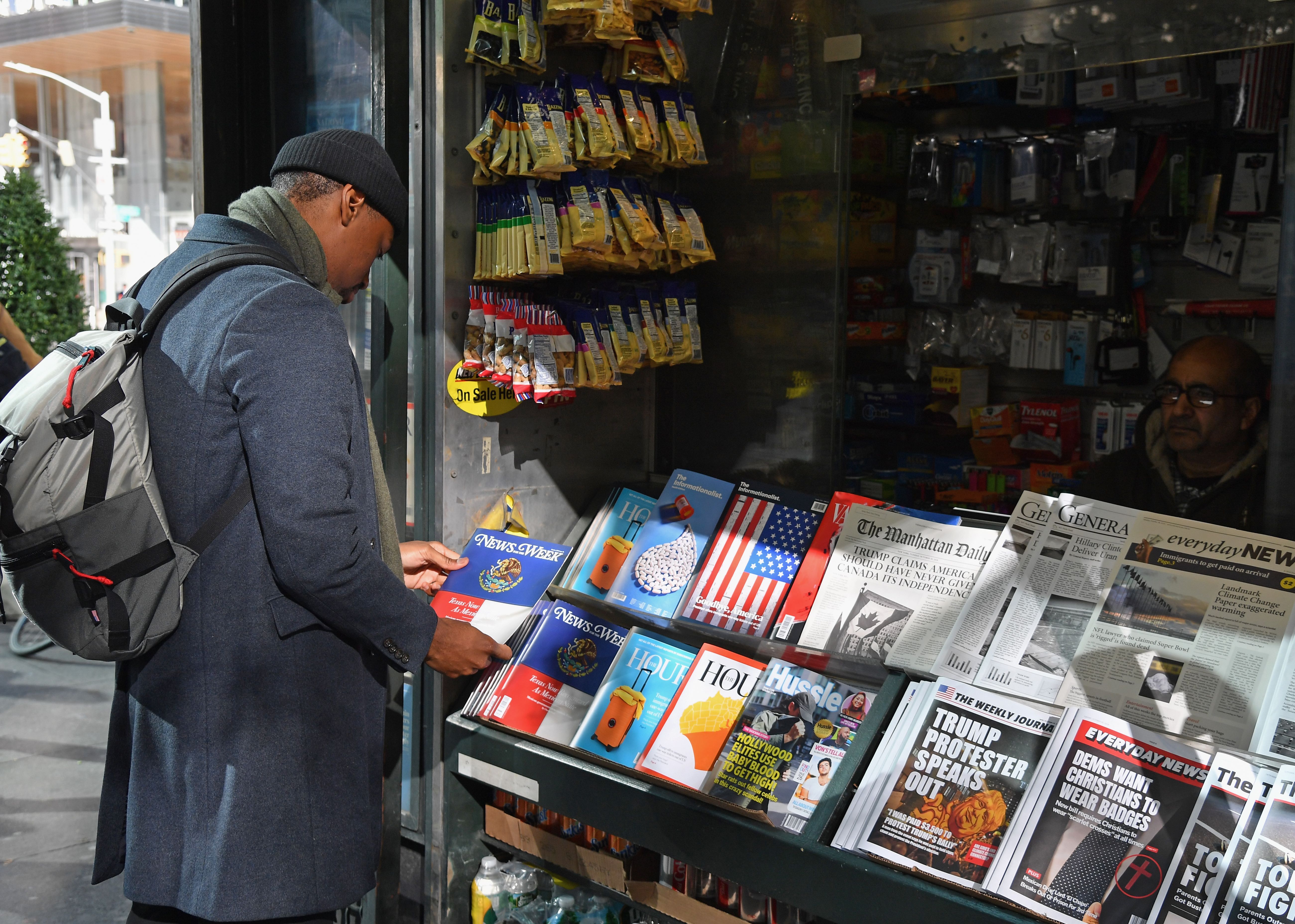 A misinformation newsstand is seen in midtown Manhattan on October 30, 2018, aiming to educate news consumers about the dangers of disinformation, or fake news, in the lead-up to the US midterm elections. – The first-of-its-kind newsstand was set up by the Columbia Journalism Review. (Photo by ANGELA WEISS/AFP/Getty Images)

Holt is referring to my satire channel ProgressiveDadTV which aimed at puncturing online outrage culture using humour. Joe Rogan, among many liberals, was a fan of the account and this write up from PJMedia from last year points out that the account poked fun at outrage merchants from across the political spectrum equally. Holt doesn’t have to find it funny but he does need to provide evidence when he accuses it of being far-right.

The likely source of Holt’s accusation is It’s Going Down News, a revolutionary anarchist news outlet which I linked to several journalists in my Quillette piece. It’s Going Down also provided no evidence that ProgDad was far-right — not a single tweet or Instagram post. But not only does Holt take them as a credible source, he even parrots their narrative almost verbatim. In this piece, It’s Going Down stated that I am a “well known racist far-right troll … who has now rebranded as an ‘online extremism expert’.”

As if to prove my initial thesis about journalist and antifa connections correct, Holt has used an anarchist antifa mouthpiece as a reliable source for me being right-wing. He also ignores the fact — which I supplied in our email interview — that Progressive Dad was suspended from Twitter for mocking an actual far-right extremist. I had specifically asked Holt to mention this fact should he talk about my suspension.

Contrary to Holt’s claims, I have been involved in studying online extremism since 2016 when, after a lengthy and competitive interview process, I was asked by the Tony Blair Faith Foundation to produce a series of curriculum documents that focus on providing interventions for youths at risk of drifting into online extremism. (RELATED: Columbia Journalism Review Endorses One-Sided Journalism In Transgender Athlete Debate)

While the project fizzled out after major structural changes in the organization I have remained in contact with the person who interviewed me at the time and I have had him join, via Skype, one of my seminars at the University of Augsburg to help student teachers identify at-risk students.

I explained this to Holt in the interview he conducted as preparation of his article. He ignored it and instead perpetuated antifa-led conspiracy theories about my professional integrity. And CJR published them as fact. Holt did not follow up on any of my responses before publishing. More concerning, his editor at CJR further peddled these conspiracy theories on Twitter, posting a number of defamatory and mocking tweets. One of these was liked by Michael Hayden, an SPLC researcher who has worked with Thielman to produce a guide on open-source intelligence, and Will Sommer, who covers the far-right for The Daily Beast.

In our interview I also provided a detailed break-down of the methods of my study. Holt, again — through incompetence or malice — completely oversimplifies that method in paragraph six of his article. He says, “Lenihan tells CJR via email that his methodology consisted of labeling Twitter users as ‘highly connected’ to antifa if they had ‘8 or more connections’ on Twitter to either accounts run by antifascist activists, or one professor at the University of Hong Kong.”

Holt is trying to imply that the individuals in our dataset were connected to eight random antifa accounts on Twitter. This is not the method I explained to him in response to his questions.

Importantly, Holt’s attempt to minimize the significance of the in-group connection demonstrates a fundamental misunderstanding of how networks are mapped. The actual methodology goes far beyond that, as laid out in this recent article by Quillette.

Later in his piece, Holt quotes Erin Gallagher who states, “we can only really say that journalists who report on the far right follow antifascist accounts … on Twitter – which is not really a groundbreaking revelation.” (RELATED: Lone Antifa Member Attempts To Lock College Republicans Into Campus Speaking Event)

My point exactly. Network mapping is only a first step in any research project. I myself was at pains to point that out in the Quillette article, to Gallagher herself on Twitter, and to Holt in the email interview. Our data merely provided us with a list of individuals who have demonstrated a conscious and strong in-group preference in our antifa dataset. 15 of these accounts were verified journalists. In a second step we manually turned to their body of written work for evidence of critical reference to antifa. We couldn’t find a single case. Holt and Gallagher have continued to ignore this part of our study.

The most embarrassing part of Holt’s criticism of our method is his mention of “a professor at the University of Hong Kong.” He claims this random professor was one of our seed accounts.  In my my interview with Holt, I clearly mention Mark Bray, author of “Antifa: The Anti-fascist Handbook” twice. There is indeed a professor at Hong Kong called Mark Bray. But Holt got the wrong Mark Bray.

He has included an error so egregious that it can only be surmised that he did not read my interview. Or he did not conduct even cursory research on the topic (Mark Bray, author of the Antifa Handbook, comes up immediately on Google). Or else, if he did, he intentionally published false information. Either way, this, surely, cannot be how CJR intends to become the “intellectual leader in the rapidly changing world of journalism.” CJR have now simply changed the wording “a professor from Hong Kong” to “a lecturer at Dartmouth university,” without mentioning anything about the error ⁠— or the Antifa Handbook. (RELATED: DC Antifa Leader Charged With ‘Ethnic Intimidation’ Related To Attack On Marines)

Holt’s most pointed criticism was aimed at Quillette, for giving my research a platform in the first place. Unable to discredit me personally or the methods used in the study, instead he attempts to discredit Quillette’s vetting process. Again, as I pointed out in the interview — and which Holt acknowledges — I am hesitant to openly share my datasets, scripts and finished article. Surely the CJR — being run by the Department of Journalism — will understand this.

When undergoing peer review, most journals will demand exclusivity of both the article and all supplementary materials. While Social Networks, the journal that my paper is currently with, does not have this clause, most do and if Social Networks do not publish the paper the next journal I submit to most likely will have this clause. This does not even mention concerns about plagiarism etc. Few academics I know would share important data prior to publication.

However, I can confirm that I shared all my work and findings with Quillette under the guarantee that they would not be shared until after my submitted article has been published.

It is also worth pointing out that the article is “under review,” the third step in the peer review process. The first step is for the editor to check if the basic journal requirements are met. The second is for the editor to give an initial evaluation of the paper. If considered worthy of consideration, experts are invited to peer review. Right now, at least one peer reviewer has been found and the paper is “under review.” Based on the material I provided them with and the proof of my article being under review, Quillette were more than able to make an informed decision to print my piece. Holt’s criticism about fact checking is ironic, to say the least.

More seriously, Holt alleges that one day after Quillette published my story a video appeared on YouTube called “Sunset the Media” in which images of mass shooters were intercut with images of the reporters mentioned in my article. Holt suggests that there is a direct link between my article and that video and yet no such video could be found during my research nor did Holt include a link to it. When I reached out to CJR editors I was told by Samuel Thielman that “we don’t share our reporters’ underlying work with the subjects of our stories but I and our managing editor have both seen the video.” I also reached out to Holt for a copy of the video and received no reply at the time of going to print. We have no idea who made this video, or its actual contents. (RELATED: Revealed: Antifa Leader Relied On Anonymity To Push Radical, Violent Communist Agenda)

In a last unabashed effort to link Quillette and me to the far-right, Holt claimed the article was well received by people on Stormfront. As with ProgDadTV, he is trying to link by association. In fact, I turned down the opportunity to appear on InfoWars with Alex Jones and I also rebuffed media requests from Big League Politics because I did not want to be associated with the far-right nor have my research dismissed as partisan. I chose to publish with Quillette and I am very thankful I did. The fact-checking and editing is most certainly of the standard that the Columbia Journalism Review aspires to, and well above the standard they actually practice.