The Democratic presidential field is split almost evenly over proposals to expand the Supreme Court.

So-called “court-packing” proposals have entered the Democratic mainstream following President Donald Trump’s historic judicial confirmation successes. The New York Times asked 21 of the 22 Democratic presidential candidates whether they would expand the Supreme Court — 10 said yes to varying extents, while 11 were not as open.

South Bend Mayor Pete Buttigieg cast his support for such measures as a “court reform” package, endorsing an academic proposal to expand the bench to 15 justices. Under that system, Republicans and Democrats would each select 10 justices for the high court. Those 10 would pick the remaining five by unanimous vote.

“It’s not just about the number, but the makeup of the Court,” Buttigieg told the Times.

Democratic Sens. Elizabeth Warren of Massachusetts, Kamala Harris of California, Amy Klobuchar of Minnesota, and Kirsten Gillibrand of New York expressed openness to expanding the Court. Klobuchar said her priority would be filling existing judicial vacancies, while Gillibrand said she wants input from legal scholars as to possible ramifications.

Former Rep. Robert “Beto” O’Rourke took a somewhat different tack as compared to past statements. Though he expressed openness to court-packing proposals after entering the race in March, the former Texas congressman said term limits are a better option.

“I think the appropriate way to address this is to have fixed term limits for Supreme Court justices, to have some more regular turnover in their term of service to decrease the temperature in the partisan fights that lead up to the nominations and the confirmations,” O’Rourke said. (RELATED: Supreme Court Upholds Double Jeopardy Rule That Could Blunt Reach Of Trump Pardons)

Other candidates who would consider adding seats to the high court include John Hickenlooper, Steve Bullock, Andrew Yang, and Jay Inslee. 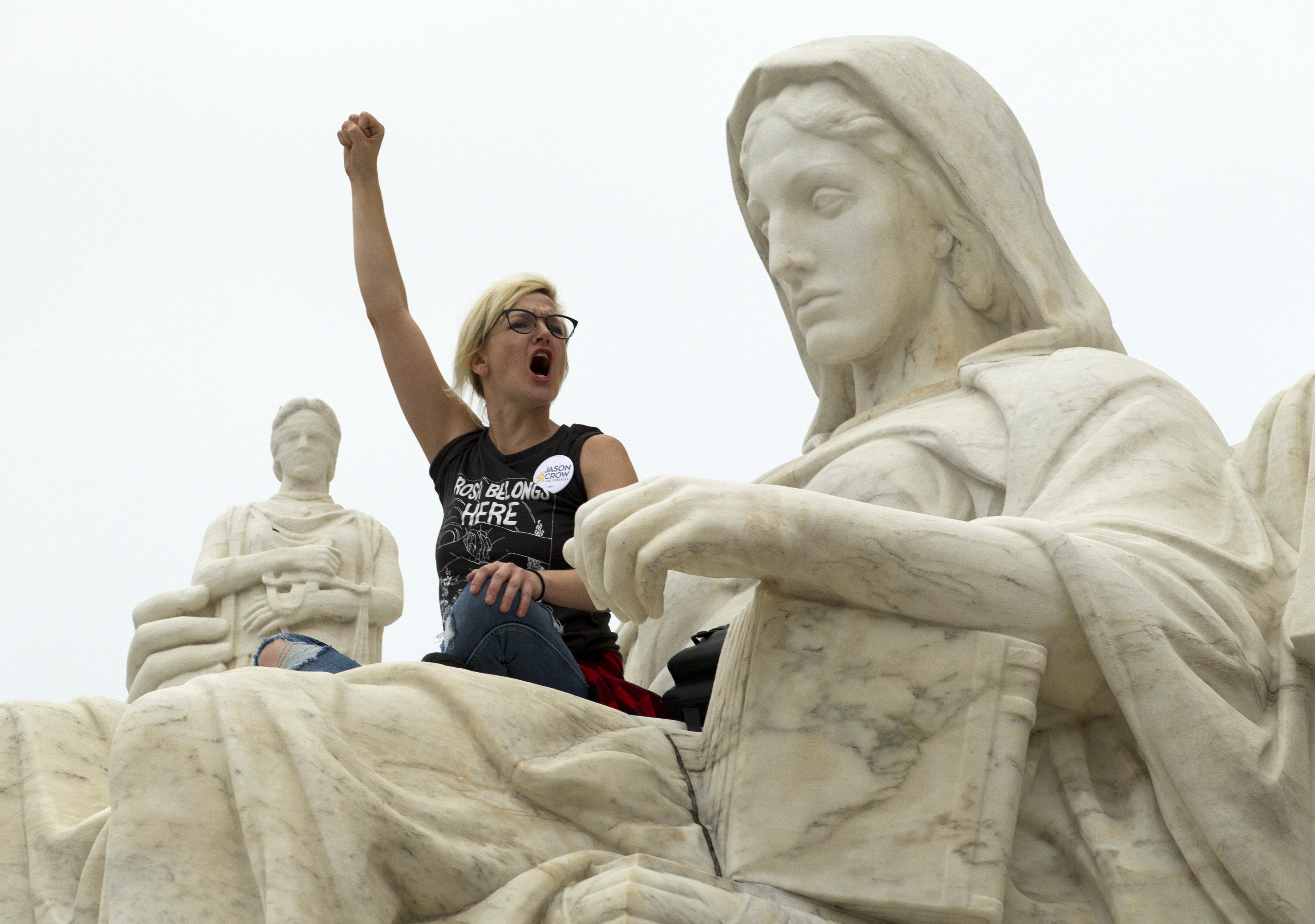 Demonstrator Jessica Campbell-Swanson of Denver stands on the “Contemplation of Justice” statue as protestors take the steps of the Supreme Court to picket against the confirmation of Justice Brett Kavanaugh on October 6, 2018. (Jose Luis Magana/AFP/Getty Images)

Eleven candidates rejected court-packing proposals. Sen. Bernie Sanders, who otherwise favors structural solutions for current problems, was the most high-profile of the nay-sayers. The Vermont socialist noted that President Franklin Roosevelt attempted to add seats on the Supreme Court after its conservative majority invalidated much of his domestic policy agenda between 1932 and 1937 — the scheme, which ultimately failed, drew heated opposition from Congress and the public.

Former Vice President Joe Biden did not participate in the Times series.

The Supreme Court is quickly approaching the end of its current term, with decisions in much-watched matters including gerrymandering, the census citizenship question, and the separation of church and state expected by the end of June.