What if someone you hated offered to pay off your mortgage or put your kids through college? You’d be suspicious at first, of course. Why is an enemy giving you the gift of a lifetime? But in the end, if you were smart, you’d take it. It would be too good to pass up.

Something very much like that happened in Washington, D.C., recently. The Trump administration debated moving some of the thousands of migrants now massing through our southern border into various self-proclaimed sanctuary cities across the United States.

Talk about great news for blue America. The left tells us that all immigration is good. More immigration is better. There is no distinction between legal and illegal varieties of immigration. If you disagree with any of this, you’re a white nationalist. That’s what they’ve said almost every day for the last two years.

And now, completely out of the blue, comes the man they despise most in the world, Donald J. Trump, offering them what they want more than anything: more immigrants, immediately, delivered right to their door at federal expense. It must have been like Christmas morning. (RELATED: Border Patrol Union President Says It’s ‘Absolutely Legal’ To Drop Illegals In Sanctuary Cities)

But that’s not how they responded. The left wasn’t happy about Trump’s offer. They were shocked and enraged. You know what this is, they said? It’s dumping. The headline on Mother Jones read, “Donald Trump Wanted to Dump Asylum Seekers on Streets of Democratic Cities.” In the view of The Daily Beast’s Harry Siegel, “The White House wanted to dump refugees in sanctuary cities.” He called that idea “nasty.” At the same time, almost simultaneously, both CNN and MSNBC ran headlines accusing the White House of wanting to “dump” migrants into cities. 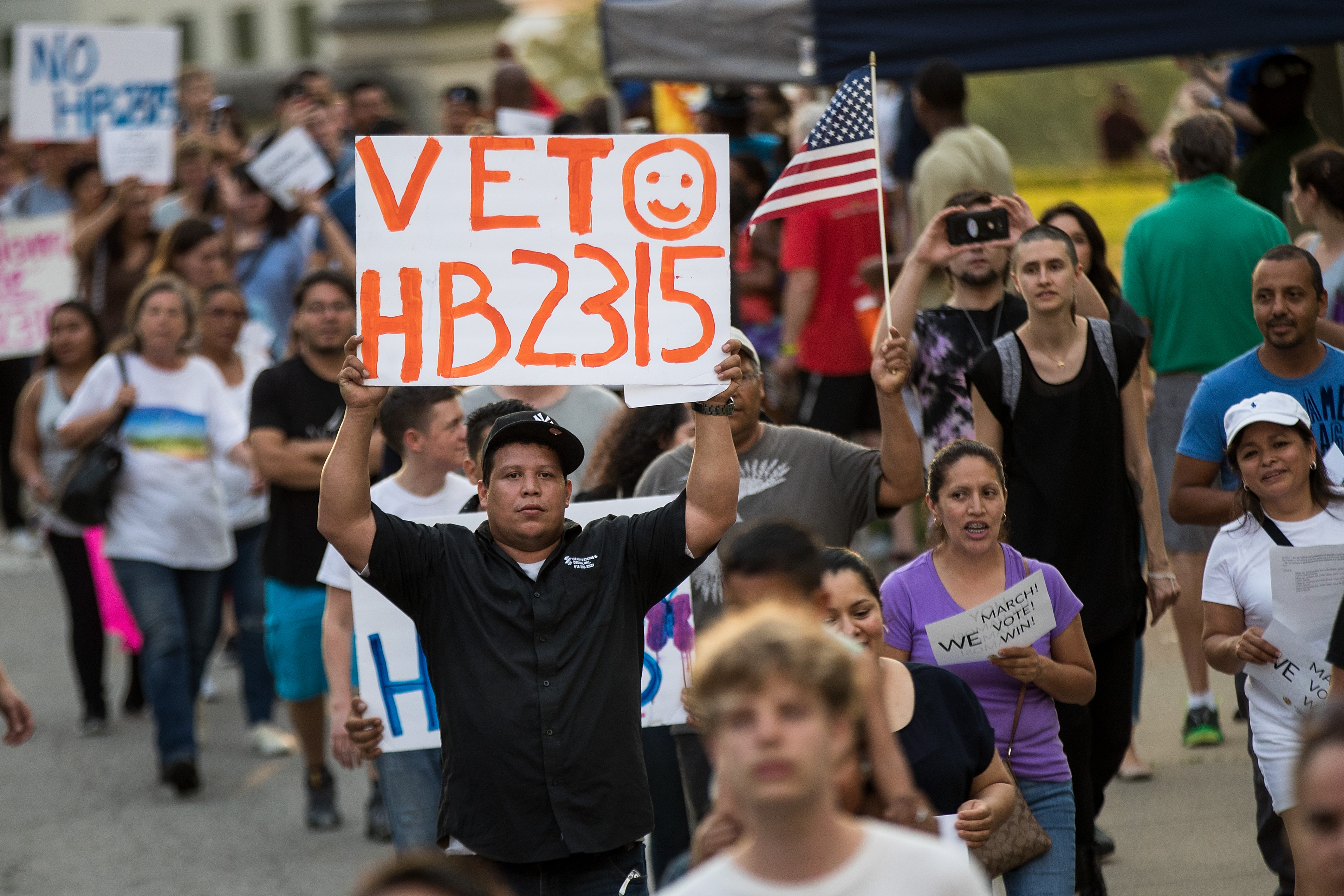 NASHVILLE, TN – MAY 31: Immigrant families and activists march during a rally outside the Tennessee State Capitol against HB 2315, a bill recently passed as law that will prohibit sanctuary city policies in the state, May 31, 2018 in Nashville, Tennessee. The legislation, which will take effect at the beginning of 2019, will require local law enforcement to comply with U.S. Immigration and Customs Enforcement (ICE) requests to hold immigrants for purposes of deportation (Photo by Drew Angerer/Getty Images)

What’s the message here? Immigrants are trash? If you wanted to defile someone’s pristine city, you’d “dump” immigrants on it? Hmm. That sounds a little … searching for the word here … racist — a lot racist, actually. But Nancy Pelosi agrees with it. She immediately issued a statement: “The extent of this administration’s cynicism and cruelty cannot be overstated. Using human beings — including little children — as pawns in their warped game to perpetuate fear and demonize immigrants is despicable.”

But that doesn’t really make sense. How can the presence of immigrants “perpetuate fear?” San Francisco is a sanctuary city. It subverted federal law in the hope more illegal immigrants would come. Now they may be coming, and San Francisco is upset.

Well, say the news anchors, Trump’s plan is illegal. There’s a process. Really? Did the people of Lewiston, Maine, or Hazleton, Pennsylvania — and countless other places across the country — take part in a process when massive groups of refugees were moved to their cities? But when you try to do that to the city where Pelosi lives, it’s supposedly “illegal.” This is getting confusing.

Let’s make it easier. Here’s a list of neighborhoods that could use some immediate refugee resettlement. These are affluent places. They are politically liberal. As a matter of policy and conviction, they love illegal immigrants; they just don’t really have any yet. Let’s change that. (RELATED: ‘CHANGE THE LAWS NOW!’ Trump Takes Aim At Sanctuary Cities, Democrats)

First would be Beacon Hill in Boston. The neighborhood has a median income of over $120,000 a year. It’s not very diverse, so it could be greatly strengthened by thousands of migrants. As John Kerry, who lives in Beacon Hill, warned in 2017: “Fear of the outsider, fear of someone who isn’t you, fear of someone that doesn’t look like you is an attack on America itself.” OK. Let’s send half of the next migrant caravan to Kerry’s ZIP code. He’ll be thrilled.

Next, we’ll head to the Upper East Side of New York. Former Mayor Michael Bloomberg lives there. He loves poor immigrants. Unfortunately for him, virtually none actually live in his neighborhood. Let’s change that.

Finally, we’ll go to the Kalorama neighborhood here in Washington. Barack Obama lives there. As he once put it: “We are a nation of immigrants. It has always given America a big advantage over other nations.” That may be true. Yet there are virtually no poor immigrants in Kalorama.

Sure seems like nobody hates diversity more than rich liberals — the very people pushing it. Let’s hope immigrants are watching all this. The left can say they love you, but if they don’t want you in their neighborhood or at school with their children, they’re lying.