A rogue Democratic aide stole a massive trove of political data and used it to harm Republicans by “doxxing” them in what prosecutors call the “largest data theft in Senate history.”

The theft was made possible, and could have been much worse, because of myriad blunders by the Capitol Police and multiple Democratic congresswomen.

Jackson Cosko was sentenced Wednesday to four years in prison. Prosecutors called his offense an “extraordinary” and “vicious” crime where the ex-Democratic aide stole a senator’s data, mined it for blackmail material and then published the home addresses and phone numbers of Republican senators during the 2018 hearings for now-Supreme Court Justice Brett Kavanaugh.

Even after the computer administrator was caught in the act and arrested for spying on a senator’s office using his advanced technical skills, Capitol Police didn’t check the USB ports of nearby computers. Six different computers within steps of where he was arrested in the Senate had keylogger devices in them that continued to capture and beam private information over WiFi. They were only exposed through a confession.

Police then got a search warrant on his home, but missed critical evidence because they didn’t check the oven.

Toxic individuals were repeatedly passed among government offices apparently without anyone performing a background check or calling for job references. And despite lamentations from Democrats about the DNC hack, there was seemingly little concern about technology and data security.

“The Capitol Police, when they executed the search warrant on his home, they missed what we consider the most significant tranche of data. And we told the Capitol Police to go back and check the oven,” defense attorney Brian Stolarz said in court Wednesday, highlighting the extent of Cosko’s cooperation with police after being caught. (RELATED: ‘Self-Righteous’: Dem Staffer Headed To Prison As Prosecutors Look To Make Example Of Him For Politically Motivated Crimes)

Even though Hassan and the police knew Cosko used his computer knowledge to pilfer data from the office, no one in the Senate appears to have done a thorough sweep of the office’s electronics. The Senate continued to be spied on even after his arrest because officials never checked the USB ports of computers in her office, where keylogging devices were beaming back every keystroke over WiFi.

“He told them about the keyloggers. If he didn’t, they’d still be there,” Cosko’s lawyer said in court.

To this day, police haven’t been able to figure out how to detect the keyloggers from their signal, and it is hard to rule out that they aren’t still elsewhere on the Capitol complex.

Hassan hired a felon into the office’s most sensitive role

Before any of this trouble began, Cosko already had felony run-ins with the law attributed to drug addiction. Nonetheless, Hassan hired him as computer systems administrator, which prosecutors said gave him the “keys to the electronic kingdom … the sysadmin becomes the ultimate insider threat.” She hired him in early 2017, the same time period during which a different scandal involving congressional IT aides abusing their positions was breaking in the House.

Hassan fired Cosko in May 2018 because of a different issue that pre-dated the hack. Hassan spokesman Aaron Jacobs did not respond to The Daily Caller News Foundation’s questions about that incident. Cosko hatched a plan to steal the office’s data and use it to extort Hassan into giving him a good reference, according to prosecutors, out of fear for future job security in Washington.

Rep. Sheila Jackson Lee hired him despite having just been fired

Democratic Rep. Sheila Jackson Lee of Texas gave him an unpaid position, apparently without calling Hassan’s office as a reference check. The idea of a 27-year-old man who was working in a specialized role in the upper chamber suddenly taking an unpaid “internship” in the lower chamber didn’t seem to set off red flags for Jackson Lee.

During this time period, Cosko stole Hassan’s data with the intent of blackmailing his Democrat former employer, but his own partisan bias overwhelmed him as he watched the Supreme Court confirmation hearings of Brett Kavanaugh from his office in the House, court documents show. Some of the data he stole included Republican senators’ home addresses and phone numbers.

Using his House computer in Jackson Lee’s office, he doxxed Republicans who were voting on the confirmation by posting their private information to Wikipedia in order to intimidate them.

Feinstein was the top Democrat on the Judiciary Committee during the nomination, and played a critical role in shepherding sexual harassment allegations against Kavanaugh. Jackson Lee attracted national attention during the hearings by slipping a mysterious envelope to the lawyer of Kavanaugh’s accuser on television.

During this period, Cosko was addicted to drugs and alcohol so badly that “the probation office indicated they’re surprised he wasn’t dead,” Judge Thomas Hogan said.

Cosko’s attorney said “it was legendary, and not in a good way. The worst I’ve ever seen.”

This behavior did not seem to stand out in Jackson Lee’s congressional office. Multiple studies have named Jackson Lee’s office the most dysfunctional on Capitol Hill. Jackson Lee spokeswoman Robin Chand did not respond to The DCNF’s questions.

His accomplice gets a job for a congresswoman’s office

Cosko knew how to operate Hassan’s computer systems, but since he was fired, he didn’t physically have access. Prosecutors said Cosko gave rent money to another Hassan staffer, Samantha DeForest-Davis, in exchange for her key. They allege Davis was aware he was using it for late-night break-ins to steal data, and that she saw some of the data.

During one of these break-ins on Oct. 2, 2018, Cosko was caught in the act by another Hassan staffer and fled, later emailing the witness that he had private emails, texts, and even health information about senator’s children he would publish unless the witness kept quiet, according to a statement of facts Cosko agreed to as part of his plea deal.

The statement said Cosko asked Davis to go into the crime scene, wipe his fingerprints off the computers, and restart the computers to destroy evidence. Prosecutors said Deforest-Davis texted: “So I was able to wipe down the keys and mouse but [a witness] was coming so I could [not] do the other thing … sorry I couldn’t do everything.”

Cosko was arrested Oct. 3, 2018, and lied to police in two interviews before eventually agreeing to cooperate and implicating Deforest-Davis, prosecutors said in court Wednesday. As a result, she was fired from the Senate Dec. 19, 2018, according to payroll records.

On Jan. 18, a case against her became visible in online federal court records, titled USA v. DEFOREST-DAVIS, and was one of the first results to come up when her name was searched on Google. 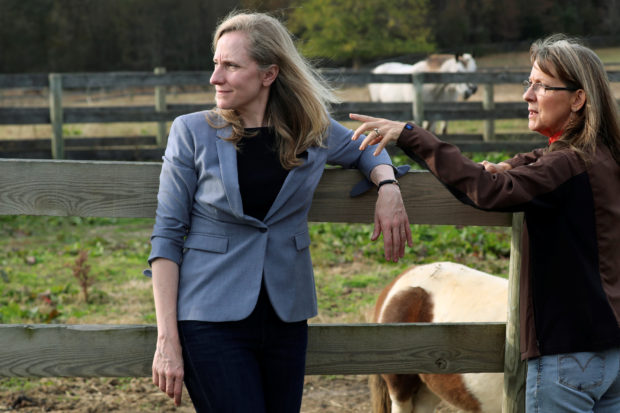 Eight days later, Rep. Abigail Spanberger, a Virginia Democrat, hired Deforest-Davis anyway. Spanberger, a former CIA agent, apparently did not detect Deforest-Davis’s history. Spanberger’s spokesman Connor Joseph did not respond to a request to explain whether the congresswoman’s office called anyone in the Senate to get a job reference and why her central Virginia constituents should trust that her office safeguards their personal data.

DeForest-Davis abruptly departed the payroll after working from only Jan. 30 to Feb. 11, according to pay records.

According to a fundraising campaign she posted online, DeForest-Davis is set to begin yet another government job as a Milwaukee Public Schools teacher through Teach for America, which did not respond to a question about whether it did any reference checks, and if so, who gave her a reference.

Luke Rosiak is the author of the new book Obstruction of Justice: How the Deep State Risked National Security to Protect the Democrats, about a computer hack on the House of Representatives.