The Washington Post Fact Checker dinged former Vice President Joe Biden Thursday for what it called a “flat-out wrong” claim he made Monday about the number of Americans living in poverty.

“We have … almost half the people in the United States living in poverty,” Biden said at the Poor People’s Campaign presidential forum in Washington, D.C.

The number of Americans living in poverty is closer to 14% using the supplemental poverty measure, and 12.3% using the official poverty measure, so WaPo awarded the Democratic frontrunner “three Pinocchios,” which indicate a “significant factual error,” for the claim. The fact checker wrote:

Biden is flat-out wrong to claim half the country is living in poverty. The three independent experts we surveyed, all of them leaders in the field of poverty research, did not hesitate to criticize his math and rejected the notion that all people below 200 percent of the poverty line should be counted as poor.

Biden’s campaign said it reached its figure by taking into account the supplemental poverty measure and every individual or family with an income below 200% of the poverty level, which brought the number to 140 million people. That’s 43.3% of the 2017 U.S. population, which is close to half. (RELATED: Alan Dershowitz Says He’d Vote For Biden Over Trump In 2020) 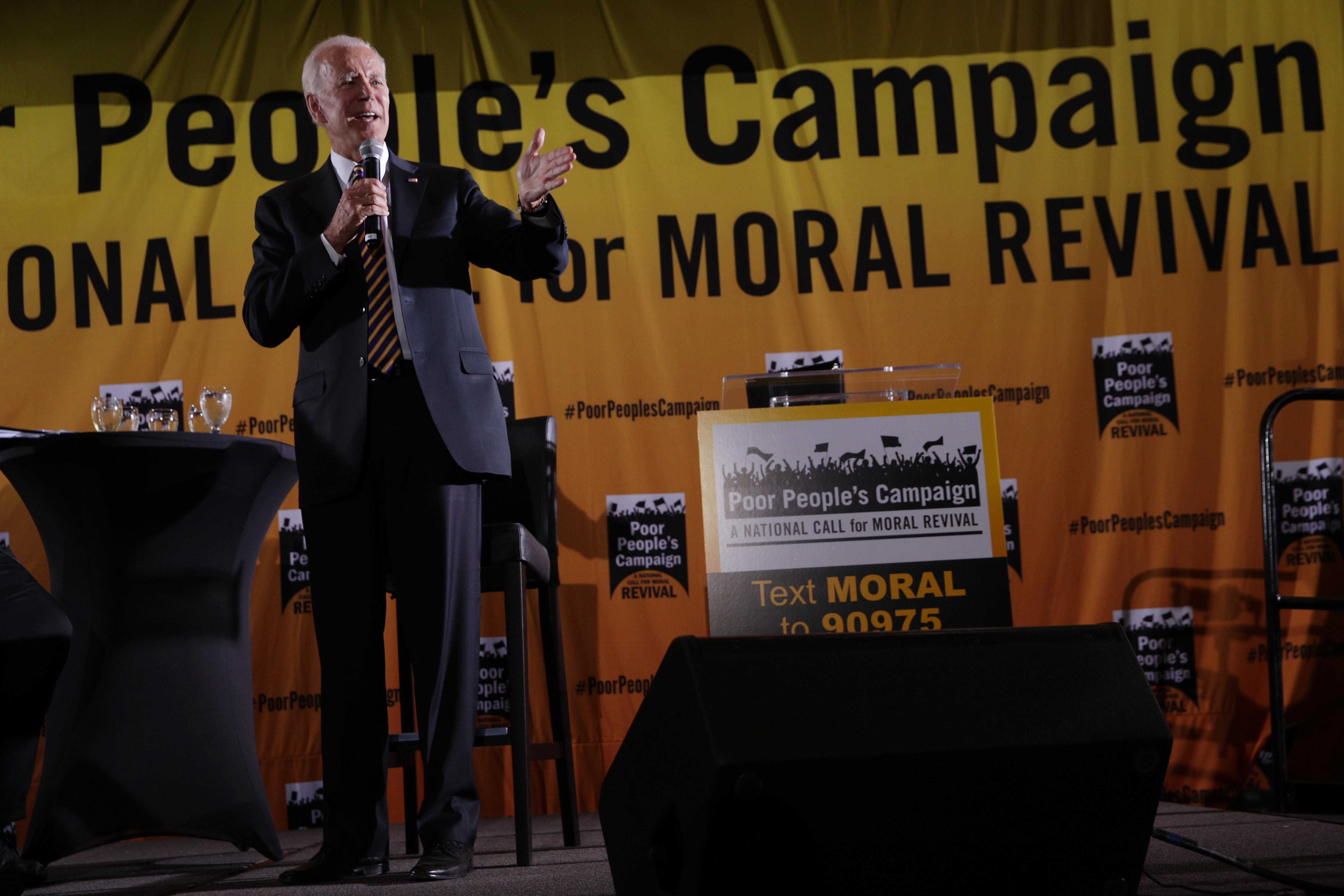 But Brookings Institution poverty researcher Ron Haskins took issue with that, according to WaPo.

“I think it’s extremely misleading to say half the people in America are in poverty when you’re talking about twice the poverty line. It’s crazy to do that,” Haskins said. “And that’s especially the case because we have made great progress on poverty.”

Biden’s campaign said the Poor People’s Campaign also cites the nearly 50% figure, but that organization’s formula includes both “poor” and “low-income.” The latter extends to people who live at twice the poverty line, but the former is more narrow.

“Poverty spans every race, creed, color and sexual orientation,” the Rev. William J. Barber II of the Poor People’s Campaign said at the forum according to WaPo. ” … All of those numbers combined makes up 43.5 percent of this nation — not 30, not 23, but almost half of this nation — and any nation that ignores half of its people, half of the people, is in a moral and economic crisis that is constitutionally inconsistent, economically insane and morally indefensible.”

Biden echoed his words later in the forum.

“Reverend, it’s not only that we have less than half the people in the United — almost half the people in the United States living in poverty — it’s ridiculous that we have this extreme, extreme, extreme change that’s going on. Deep inequities in our society. Our policy discriminates against and devalues black people, Native Americans, people of color, women, LGBTQ individuals, people with disabilities,” he said, according to WaPo.

As a lifelong champion of working families, economic dignity, and inclusion, alleviating poverty is a sacred goal to Joe Biden and he firmly believes we must never ignore the complex multitude of financial hardships that make up the burden of poverty. He salutes Reverend Barber and the Poor People’s Campaign for the indispensable work they do every single day and for the call to action they have issued to the entire country.

The fact check on Biden comes as the well-known Democrat faces attacks from all sides. Biden is resisting a call from his 2020 rival, Democratic New Jersey Sen. Cory Booker, who said he should apologize for touting his ability to work with pro-segregation politicians during his time in the Senate. The 76-year-old also faced criticism earlier in June for appearing to use similar language from other sources in at least five different passages in his climate plan.

The Biden campaign did not immediately respond to The Daily Caller News Foundation’s request for comment.