Any state government’s direction on the divisive, hot-button issue of abortion typically moves with its politics, with blue states protecting it right to the point of delivery and red states adopting restrictions, from partial birth bans to outlawing the procedure altogether. But how will the 2020 election outcome affect what individual states are doing, particularly those trying to limit the effects of Roe vs. Wade in their jurisdictions? There’s a lot at stake, but as National Right to Life president Carol Tobias made abundantly clear in her interview with the Daily Caller, the fight will continue, whatever the outcome.

The list of states that restrict abortions in some capacity is more expansive than you might think. Currently, more than 20, including Pennsylvania, Wisconsin, Rhode Island, and even Massachusetts — though that state is currently considering going the way of New York and eliminating their restrictions — limit abortions to pregnancies of 24 weeks or less. Around two-thirds of states ban public funding except in cases of rape, incest, or endangering the mother’s life, and approximately the same number have passed laws banning so-called partial birth abortions. Purposefully tempting a court challenge, Alabama famously passed the strictest abortion law in the nation — H.B. 314 — last month, an almost total ban on abortions with zero exceptions except to prevent a “serious health risk.” 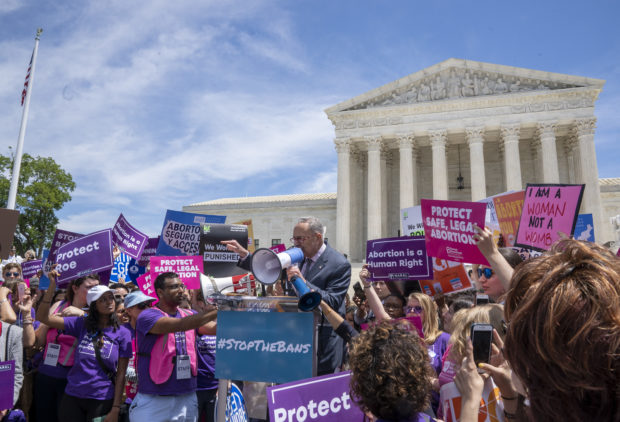 WASHINGTON, DC – MAY 21: Senate Minority Leader Charles Schumer, (D-N.Y) speaks at a pro-choice rally at the Supreme Court on May 21, 2019 in Washington, DC. The Alabama law, signed by Gov. Kay Ivey last week, includes no exceptions for cases of rape and incest, outlawing all abortions except when necessary to prevent serious health problems for the woman. (Photo by Tasos Katopodis/Getty Images)

Notably yet predictably, left-leaning states have made moves in the opposite direction, expanding abortion access and eliminating any restrictions that were previously on the books. Maine, Illinois, Vermont, Nevada, and the above-mentioned New York have all passed significant pro-abortion laws, and more are doubtless on the way.

Agree or disagree, such moves speak to the founding notion of federalism, or the division of power between the federal and state & local governments. Conceivably, the 10th Amendment to the Constitution grants the states all powers not expressly defined for the federal government. This allows states, in many cases, to test out what works and what doesn’t. Their example then serves to either spur other states to adopt similar legislation, or something entirely different.

Despite his negative poll numbers, President Trump has an imposing war chest, the advantage of incumbency, and a seasoned campaign machine. Anyone looking at current polling that shows the president losing to everyone with a D beside their name and assuming the election will be a cakewalk for Democrats is being naive. However, Trump’s penchant for controversy — though it has in part helped earned him his rabid base of support — has also generated an equally rabid base of haters who will doubtless climb over hot lava for the chance to vote against him. In other words, it’s a toss-up at this point, and any opinion to the contrary is simply speculation. 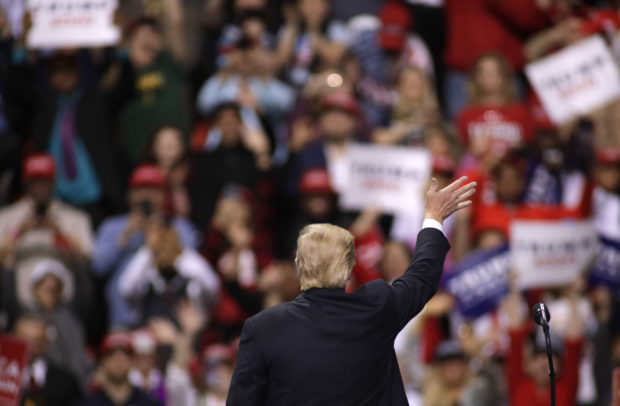 GREEN BAY, WI – APRIL 27: US President Donald Trump waves to the crowd after speaking to a crowd of supporters at a Make America Great Again rally on April 27, 2019 in Green Bay, Wisconsin. (Photo by Darren Hauck/Getty Images)

The battle for the executive branch will obviously affect the battle in the courts, particularly as it relates to abortion rulings. While Trump has certainly been appointing pro-life judges at a record pace, a change in the executive will bring that to a screeching halt. And what is currently a hard-earned edge at SCOTUS can be switched around in a matter of months.

The House of Representatives is also a toss-up, with Dems having the edge of incumbency. The Senate, however, is another matter entirely. Citing a dearth of 2018’s “popular Governors and 2018 superstars” choosing to run as Senate candidates in 2020, TheHill contributor and former Bloomberg executive director Albert Hunt argues that the upper chamber could be Democrats’ Achilles’s heel. He then lays out the potential consequences, even if Democrats take the White House: “If they win the presidency and the House but Republican Mitch McConnell is still the senate majority leader, they can forget about any new agenda. The Kentucky Republican has shown he will bend or change any rules or procedures to thwart the opposition.” (RELATED: Ocasio-Cortez Says Hyde Amendment ‘Isn’t About Abortion’)

Of the 12 incumbent seats Democrats hold, only one, the seat held by Alabama’s Doug Jones, is in jeopardy of flipping. (Democrats are probably contributing to Roy Moore’s potential campaign about now, but that’s another story.) On the other side, 22 are GOP-held, and Democrats need only flip three ⁠— four if Doug Jones loses ⁠— and win the presidency in order to wrest back Senate control. Of these, the most likely to be severely tested are Arizona’s Martha McSally, Maine’s Susan Collins, Iowa’s Joni Ernst, Georgia’s David Perdue, Colorado’s Cory Gardner, and North Carolina’s Thom Tillis. Win three of these six, and the Senate is in Democratic hands. It’s somewhat of an uphill battle in a cycle where Trump will be on the ballot in 50 states, but it can be done. 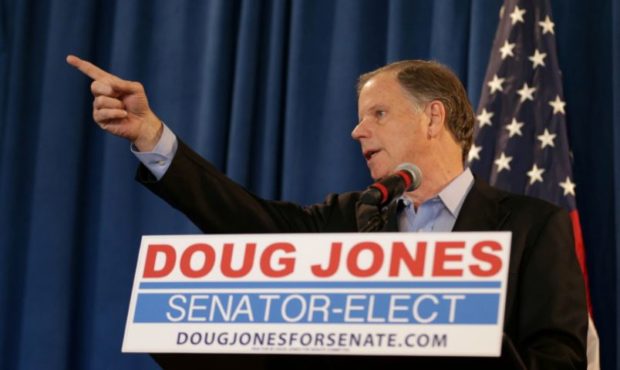 “Of the 22 seats Republicans will have to defend in 2020, Trump carried 15 of them by double digits in 2016,” writes Philip Klein at The Washington Examiner. “Just two — Sens. Cory Gardner in Colorado and Susan Collins in Maine — are in states that Trump lost. Three more are in states that Trump won by within about five points: Arizona, Georgia, and North Carolina. One might want to add Sen. Joni Ernst as potentially vulnerable in Iowa, which has proven a swing state in recent political history, even though Trump carried it by 9.4 points in 2016.”

The Daily Caller asked National Right to Life president Carol Tobias for some insight into how the country’s oldest and largest pro-life organization plans to carry out their mission in 2020 and beyond, whatever the electoral results may be. While national results will certainly impact the issue, Tobias pointed out that gubernatorial races will actually have a “bigger impact on state legislation” than any result at the federal level.

TheDC: With some states passing abortion laws that are more and more restrictive, what are the chances of these laws ⁠— such as the one in Alabama in particular ⁠— holding up in the courts, even if President Trump and a GOP Senate are re-elected?

Tobias: It’s always hard to predict how courts will respond because of the disparity in legal philosophies of judicial appointees on the state level. State courts are limited by the restrictions of Roe v. Wade and Doe v. Bolton but since the U.S. Supreme Court allows states to take a “compelling interest” this does give them latitude to pass legislation (which then usually has to face court challenges). (RELATED: ‘Old White Lady’ — Pennsylvania State Rep Harasses Elderly Abortion Protester)

DC: If President Trump is defeated in 2020 and the GOP holds onto the Senate, what are the prospects for state driven abortion legislation holding up or new laws being passed in the states? Will they be affected at all?

T: Since 1973, regardless of who is in the White House or which party controls Congress, pro-lifers have been working within their states to pass legislation to protect unborn children.  That will not change after the 2020 election.

A possible challenge to these laws will, of course, be impacted by Roe v. Wade and Doe v. Bolton.  However, while the U.S. Supreme Court has made rulings in the past modifying the parameters of Roe and Doe, it is difficult to predict what the current U.S. Supreme Court would do if they were to take up challenges to these state laws.

Gubernatorial races will have a bigger impact on state legislation.

DC: What are the prospects for state laws should Democrats take all three branches? Will the federal government be able to nullify these laws even without court help?

T: Democrats controlled the White House and Congress in 2009 and 2010, the first two years of President Obama’s administration.  It was during this time that the first state (Nebraska) enacted the Pain-Capable Unborn Child Protection Act. Other states strengthened parental involvement laws or informed consent statutes, and two states passed a ban on partial-birth abortion.  Pro-life efforts at the state level will continue if Democrats take control of the federal government.

Roe and Doe are Court decisions that have never been codified by federal law. Protective, life-affirming federal laws exist –such as the Hyde Amendment which prevents tax dollars from being used to pay for abortions except in cases of rape, incest or the life of the mother. However, no federal law has ever entrenched abortion on demand as it exists through the Roe and Doe Supreme Court decisions.

DC: In your view, how has President Trump been for pro-life activism in the United States?

T: President Trump is the most pro-life president since the Roe and Doe decisions. This president and his administration have made extensive efforts to protect both women and unborn children from the dangers of abortion. The president re-established Mexico City Policy, has made his opposition to abortion clear, and placed people in positions in his administration who have changed policies in favor of women and children as well as the right to life.

DC: Does NRLC have a plan regardless of the outcome? How does it differ depending on the 3 eventual possibilities? (GOP sweep, split, or Dem sweep)

T: We will keep working with our state affiliates and on the national level. Depending on who is in office, it can mean promoting pro-life legislation or working to prevent pro-abortion policies and legislation from gaining ground. Either way, NRLC and its affiliates know that as Americans learn more about the official policies of the Democratic Party and how deeply bound they are to groups like Planned Parenthood, they will reject those policies. The vast majority of Americans favor restrictions on abortion and oppose taxpayer-funded abortions. Sadly, the Democratic Party fails on both counts and courts their own future failure as a result.