Six Democrats took an all-expenses paid trip paid for by the government of Qatar in December, but two of them did not disclose it, annual ethics forms reveal.

Democratic Reps. Donald Norcross of New Jersey and Jim Himes of Connecticut did not report taking the trip to Doha, Qatar, on their mandatory disclosure forms, but Buzzfeed said they were there at the elaborate Doha Forum gathering in December.

The congressmen hold sensitive positions that make them targets of influence for Qatar, a wealthy Arab nation.

The U.S. has a military base in Qatar and the country also purchases military equipment from the U.S.

Despite Democrats’ rhetoric on the dangers of “foreign meddling,” Hines did not respond to questions from the Daily Caller News Foundation about the hidden gift.

Norcross’ spokeswoman Ally Kehoe merely stated, “my office is aware of this oversight and we will be filing an amendment.”

Most of the other politicians who Buzzfeed said were there did report the trip: Democratic Reps. Andre Carson and Dan Kildee of Michigan and Ami Bera of California. Democratic Rep. Brendan Boyle of Pennsylvania was on the trip but got an extension on filing his disclosure. 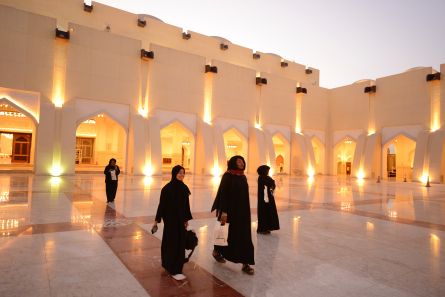 The congressmen met with Qatar’s deputy prime minister and minister of foreign affairs on the trip.

Al Jazeera “has proved itself a useful tool for the station’s political masters,” Joseph LeBaron, who served as ambassador to Qatar in the Bush and Obama administrations, wrote in a 2009 diplomatic cable. (RELATED: Sharia Law Nation Of Qatar Bankrolls Viral Videos Critical Of America’s Positions On Abortion, LGBTQ Issues)

The Department of Education is also investigating Qatar’s infusion of cash into U.S. universities. Qatar poured a billion dollars into U.S. colleges between 2011 and 2016 — especially to Georgetown University, known for training America’s future diplomats. Georgetown also has a federal contact that enables it to help shape the way the Middle East is taught to American children in K-12 schools.

ThinkProgress reported: “Qatar operates under strict, Wahhabi-influenced Sharia law which attaches harsh criminal penalties to such things as alcohol consumption (forbidden in all but a few venues) and anything that might be termed an ‘illicit’ sexual practice,” including gay sex.

The failure to disclose the trips was first reported by Al-Monitor.