President Donald Trump signed an executive order Monday placing “hard-hitting” sanctions on Iran after increased tensions over the past week.

The move comes just days after Iran shot down an unmanned U.S. surveillance drone, an action the president called “not good and not appropriate.” (RELATED: Iran Downs U.S. Navy Drone)

“Today’s action follows a series of aggressive behaviors by the Iranian regime in recent weeks including shooting down of U.S. drones,” Trump explained during the signing in the Oval Office. “These measures represent a strong and proportionate response to Iran’s increasingly provocative actions.” 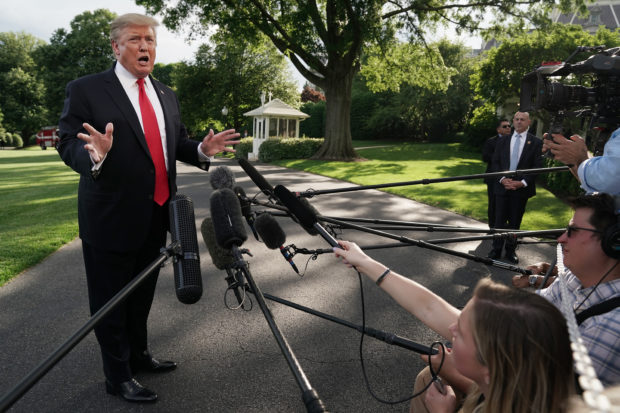 WASHINGTON, DC – MAY 20: U.S. President Donald Trump talks to journalists as he departs the White House for a campaign rally in Pennsylvania May 20, 2019 in Washington, DC. On his way to Montoursville, Pennsylvania, Trump said that Iran does not currently pose a direct threat to the United States. (Photo by Chip Somodevilla/Getty Images)

In addition to shooting down the U.S. drone, Iran has been blamed for an attack on two oil tankers in the Strait of Hormuz. Following the dissolution of the Iran Deal, Supreme Leader Ayatollah Ali Khamenei warned last week that the U.S. could not stop his country from developing nuclear weapons.

In response to Iran’s aggression, Trump was reportedly prepared to launch a military strike against the Middle Eastern country. However, shortly before giving the final order, the president said he pulled back after learning the strike would kill 150 people.

“Ten minutes before the strike I stopped it, not proportionate to shooting down an unmanned drone,” Trump tweeted Friday.

Trump reiterated during the signing of the new sanctions that the U.S. has shown “restraint” in regards to Iran, but warned that they could opt for a tougher response in the future.