Reddit restricted its largest pro-Trump forum after months of “rule-breaking behavior” and language that “incites violence” Wednesday in a rare move.

The pro-Trump forum is called “The_Donald” and has been placed in “quarantine” because of certain user comments posted in the forum.

Reddit is a social news site that allows for members to write content, including links and images. Reddit has restricted a few forums in the past such as “White_Pride” and “watchpeopledie,” wrote Drew Harwell, a Washington Post reporter.

Reddit just slapped down its biggest pro-Trump forum for months of “rule-breaking behavior” and incitements to violence. These are rare punishments for only the most offensive forums; past quarantines included “White_Pride,” “911truth” and “watchpeopledie” https://t.co/QbCPJJZ0hc https://t.co/y2pAGMPGXC

The forum has been moderated after anti-police posts were published on the website, according to Reddit. Some members allegedly were trying to incite violence against police officers, and Reddit wrote it had “observed this behavior in the form of encouragement of violence towards police officers and public officials in Oregon,” according to a post on the forum.

Republican officials in Oregon fled the state last week to avoid having to vote on a cap-and-trade climate bill, and officials were trying to bring them back using the police. (RELATED: ‘Police Haters’ Taunt Officers At Scene Of Line-Of-Duty Shooting That Killed Female Rookie)

“Most recently, we have observed this behavior in the form of encouragement of violence towards police officers and public officials in Oregon,” Reddit sent to moderators of the forum as an explanation for the restrictions.

“As we have discussed in the past, and as detailed in our content policy and moderator guidelines, we expect you to enforce against rule-breaking content,” Reddit wrote. “You’ve made progress over the last year, but we continue to observe and take action on a disproportionate amount of rule-breaking behavior in this community.” 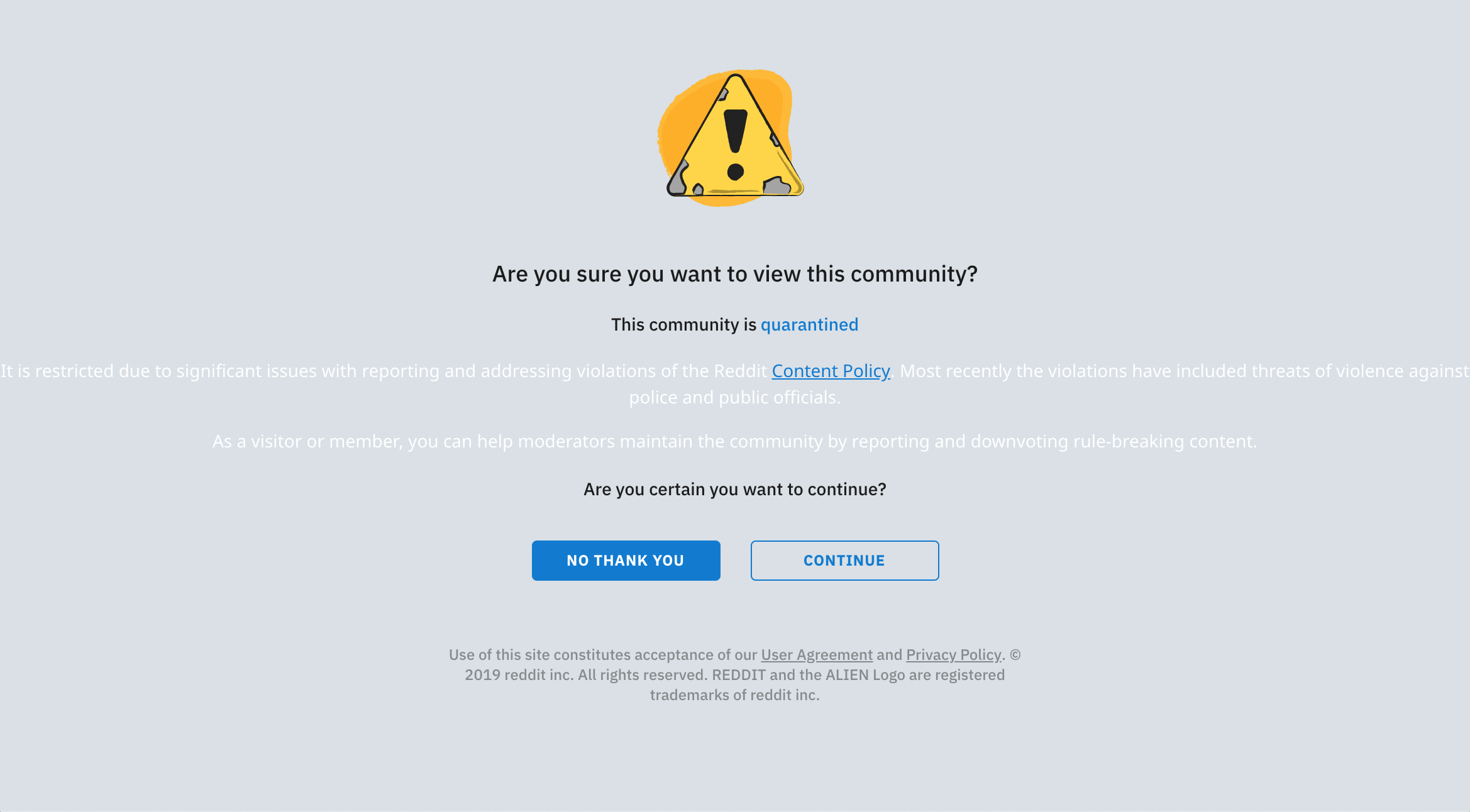 A pro-Trump forum on Reddit has been “quarantined” for trying to incite violence against police officers and public officials. (Screenshot Reddit/The_Donald)

Members of “The_Donald” expressed frustration at being censored and one moderator called “shadowman3001” wrote that Reddit was giving them “an impossible standard as a reason to kill us before the 2020 election.” Other users wrote similar responses.

Steve Huffman, Reddit’s CEO, admitted to editing Reddit user comments that insulted him by changing references to his name with that of people in the pro-Trump forum. Huffman said this in 2016 after a slew of insults were written in “The_Donald.”

A notice appears when one tries to access the forum, indicating it has been “quarantined.” Users have to opt-in to see content, and one can only access the forum by finding the direct link — it will no longer show up if a user searches it on the Reddit website.