The Democrat-controlled House Intelligence Committee continued its investigation of President Donald Trump on Tuesday by interviewing Giorgi Rtskhiladze, a Georgian-American businessman mentioned in the special counsel’s report because of his contacts with former Trump lawyer Michael Cohen.

Rtskhiladze told the Daily Caller News Foundation on Wednesday that he spent eight hours with committee staff discussing his business relationship with Cohen and the Trump Organization. He also answered questions about an Oct. 30, 2016, text message exchange with Cohen about a rumored sex tape of Trump that is mentioned in a footnote in the special counsel’s report.

Rtskhiladze, who is a U.S. citizen, said he was unable to offer any information to committee Democrats that helped their theory that the Russian government has compromised Trump. But he said he believes that they came away accepting his description of his relationship with Cohen and the Trump Organization.

The House Intelligence panel, which is led by California Rep. Adam Schiff, took an interest in Rtskhiladze as part of its recent focus on counterintelligence concerns related to Trump’s business dealings in Russia.

In the wake of the special counsel report’s finding that the Trump campaign did not conspire with Russia, Schiff has turned his investigative assets towards whether the Russian government has leverage over Trump, either in the form of business deals or blackmail material.

Rtskhiladze said he remains frustrated by the numerous Russia investigations, which have cost him hundreds of thousands of dollars in legal fees. He said that during his testimony Tuesday, he also aired his frustration with special counsel Robert Mueller, whose report misquoted Rtskhiladze’s text message to Cohen about the rumored Trump tape. 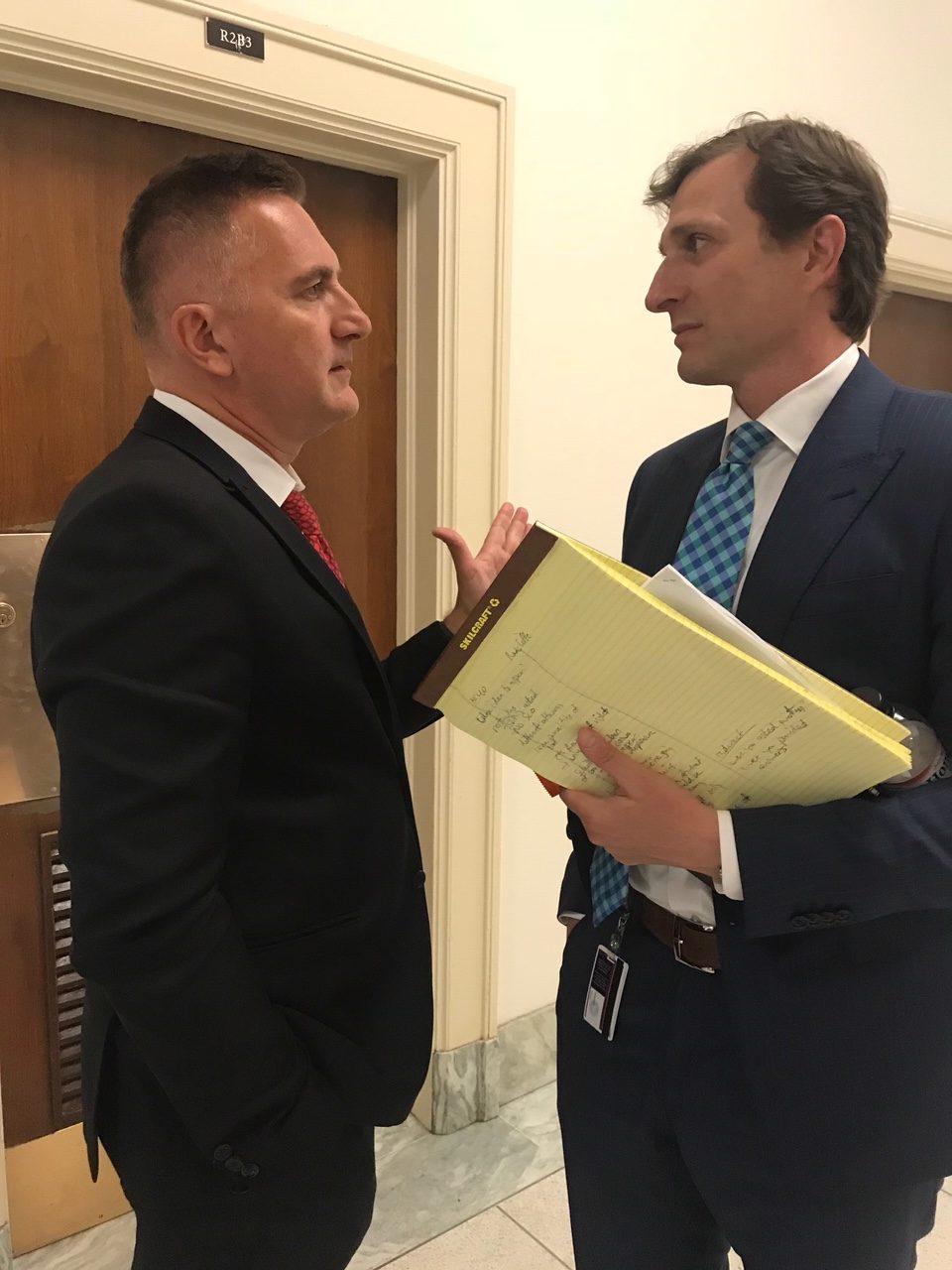 A footnote in Mueller’s report falsely identified Rtskhiladze as Russian and said that he wrote Cohen on Oct. 30, 2016, that he “Stopped flow of tapes from Russia but not sure if there’s anything else. Just so you know.”

Rtskhiladze said that the rest of his exchange with Cohen shows that he had not seen a tape of Trump and that he was merely passing along a rumor. He also notes that the Mueller report left the word “some” out of his text to Cohen, which read: “Stopped flow of some tapes from Russia but not sure if there’s anything else. Just so you know.”

“Not sure of the content but person in Moscow was bragging had tapes from Russia trip. Will try to dial you tomorrow but wanted to be aware. I’m sure it’s not a big deal but there are lots of stupid people,” Rtskhiladze added in the text exchange.

Cohen responded: “You have no idea.”

Rtskhiladze said he contacted Cohen after a friend in Russia passed along a rumor they heard from another person regarding a possible tape of Trump.

“I have never seen these tapes. I don’t know if the tapes exist. It was just a rumor from somebody who heard a rumor,” Rtskhiladze told the DCNF. He said he told the committee who he spoke to from Russia, but declined to identify the person in the interview with the DCNF because the person “did nothing wrong.”

Rtskhiladze said he contacted Cohen about the rumor both because he wanted to protect his investment in the Trump brand and because of the widespread chatter about Trump tapes in the wake of the release of “Access Hollywood” footage showing Trump saying he could grab women by the genitals.

“I conveyed that to Michael because it was a very sensitive time in general after the Access Hollywood tapes came out. Everybody was talking about tapes. Michael and I prior to that were saying that, ‘well everybody’s talking about some tapes,’ so I just notified Michael,” Rtskhiladze told the DCNF.

He also said that he has yet to hear back from the Justice Department regarding a complaint he filed about the Mueller report’s mischaracterization of his text message to Cohen.

It is not the first time that Mueller and his team have been accused of leaving context out of allegations about Trump associates.

Former Trump lawyer John Dowd blasted Mueller last month for leaving out significant portions of a voicemail he left for a lawyer for Michael Flynn. Sen. Chuck Grassley has also pressed Mueller about emails cited in court documents in the George Papadopoulos case, which left out context that undercut the theory that the Trump campaign sought meetings with Russians.

The rumored tapes of Trump match those Christopher Steele described in his infamous anti-Trump dossier. In the dossier, Steele claimed that Russian sources said the Kremlin was blackmailing Trump with video of him with prostitutes in a Moscow hotel room in 2013.

The allegation has not been verified since the dossier was published on Jan. 10, 2017. The Mueller report all but debunked the dossier’s core claim that the Trump campaign took part in a “well-developed conspiracy of co-operation” with the Russian government. It also undercut the dossier’s claim that Cohen visited Prague in August 2016 to meet with Russian hackers.

In his own testimony before the House Intelligence Committee, Cohen reiterated his denial of ever visiting Prague. He also testified about the text exchange with Rtskhiladze — who he called a friend — and said that he did not believe that a tape of Trump actually existed.

The committee also asked Rtskhiladze about his partnership with the Trump Organization on licensing deals in Georgia and Kazakhstan, as well as his September 2015 proposal to Cohen regarding a licensing deal for a Trump Tower in Moscow.

Cohen eventually decided to work with a different associate, Felix Sater, on the project. Cohen told the intelligence committee that he kept Rtskhiladze’s proposal “on the back burner” in case his negotiations with Sater flamed out.

Sater was supposed to appear before the intelligence committee on June 21, but missed the interview due to what he said was an illness. Schiff has said he plans to subpoena Sater.

Rtskhiladze, who has no connection to Sater, said that the committee made it “very clear” that he would be subpoenaed if he ignored the request for a voluntary interview.