Democrats in the House and Senate are at odds with one another over the passage of a $4.5 billion emergency border funding bill backed by Senate Republicans, a Friday report from The Washington Post revealed.

The fact that Senate Democrats went along with the bill “kneecapped the House and marked the most embarrassing defeat for Pelosi in the six months since Democrats took over the chamber,” the report read.

“Schumer destroyed all our leverage on Wednesday by not being able to hold his people,” a senior House Democratic aide told the Post. Meanwhile, an anonymous aide on the Senate side said, “They’re blaming everyone but themselves.”

The report recounted how Democrats had hoped to pass a more liberal bill that would have “eliminated funding for Immigrations and Customs Enforcement back pay as well as for Defense Department border operations” and “further tightened the administration’s ability to shift money around” in order to force Senate Majority Leader Mitch McConnell for more concessions. However, when it came time to vote on the Senate bill, only six Democrats voted against it. (RELATED: What’s The Difference Between The House And Senate Border Funding Bills?)

The next day, Pelosi walked into the two-hour-long leadership meeting saying Schumer couldn’t keep his members in line. One senior Democratic aide called it “a betrayal”; another lawmaker called it “a broken deal.”

But to those in Schumer’s orbit, the Wednesday bipartisan Senate vote should not have come as a surprise. In their view, the House had gone AWOL on border negotiations for weeks and should have known the depth of Democratic support for the bill following the 30-1 committee vote. 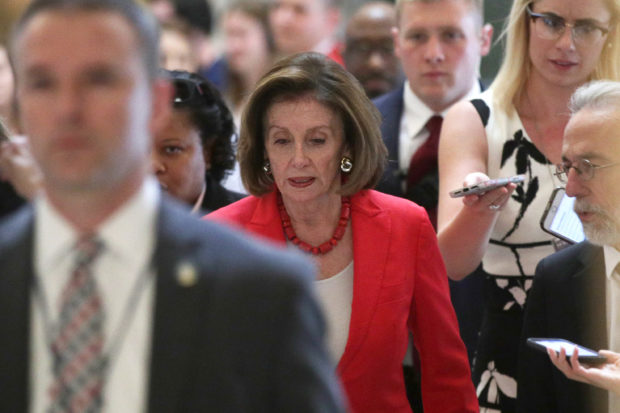 WASHINGTON, DC – JUNE 27: U.S. Speaker of the House Rep. Nancy Pelosi (D-CA) walks towards the House chamber for a vote June 27, 2019 at the U.S. Capitol in Washington, DC. (Photo by Alex Wong/Getty Images)

“The Senate Democrats did us a huge disservice. The benefit to having one chamber controlled by Democrats is you have people who can fight and win. But that requires the people in the minority chamber to also fight, even if they lose,” said Rep. Pramila Jayapal, the Congressional Progressive Caucus chair whose demands reportedly “slowed progress” and rattled more conservative Democrats.

Though a majority of House Democrats refused to vote for the Senate’s version, Republican support helped it pass the House on Thursday.

“Pelosi and those in her leadership circle were shocked,” the Post reported. “To them, Schumer had given McConnell a nuclear weapon — the ability to brag that his legislation had overwhelming bipartisan support and should therefore pass the House.”

The bill’s passage was no victory for President Trump, as it included no new migrant detention bed funding nor anything for a border wall or immigration enforcement, but it also wasn’t victory for House progressives, who wanted much more.

The Post concluded its report by stating that “Neither spokesman would address questions about the other leader.”