Publications across the country have been carrying inserts paid for by Chinese state media, replacing dwindling advertising revenue in legacy publications and raising questions about the extent to which these outlets have come to depend on foreign money.

Chinese inserts have been featured in roughly 40 major media outlets, including the Washington Post, The Wall Street Journal, The Daily Telegraph, and the Guardian, according to China Daily, which produces them. In some instances, China Daily material has been used to influence public opinion in a pro-China direction on specific issues.

For example, a four-page anti-Trump insert from the China Daily made its way into the Des Moines Register in Iowa last year. The goal was to sway public opinion against President Donald Trump’s trade war.

Register columnist Scott Paul was even harsher. While noting that many other papers had come to rely on Chinese advertorials, this instance was especially brazen. “Such an ad buy from an official organ of the Chinese government isn’t a new tactic,” he wrote. “Similar inserts from the China Daily have appeared in The New York Times, and at my home in the D.C. area, The Washington Post occasionally is delivered wrapped in them. But what sets apart the spread the Register saw fit to print is its sheer audacity; it ran just weeks before rancorous midterm elections, and its contents were specifically aimed at influencing them.”

The president responded with a tweet ripping the communist country over the insert, saying “China is actually placing propaganda ads in the Des Moines Register and other papers, made to look like news. That’s because we are beating them on Trade, opening markets, and the farmers will make a fortune when this is over!”

A 2015 report from the Daily Caller News Foundation detailed how U.S. adversaries promote propaganda in American publications through these inserts. In addition to China, Russian state media also buys space in American newspapers through something called Russia Beyond The Headlines, which operates in similar fashion to China Daily. (RELATED: US Cuts Supply Of Parts To Five Chinese Supercomputer Developers)

Like China Daily, Russia Beyond The Headlines is owned and operated by the state. It seeks to buy influence in foreign countries and undermine the agenda of Russia’s adversaries, and it does so by buying space in U.S. newspapers.

While in most cases, the inserts note that the material is paid advertising, they are formatted like a normal newspaper page, meaning some people could read these inserts and have no idea that they are actually communist propaganda. Even in times of international crises, China is shelling out unknown quantities of money to America’s biggest newspapers. (RELATED: Washington Post Fact Checkers Inflate Trump Falsehoods)

Perhaps the best example of this came in 2017, when the U.S. was on the brink of a nuclear crisis with one of China’s client states, North Korea. A China Daily article that ignored North Korea’s intercontinental ballistic missile (ICBM) threat came just one day after the hermit kingdom launched an ICBM and tensions between the U.S. and the Chinese-funded despotic regime in North Korea were at an all time high.

The inserts also aim to portray China’s relationship with the U.S. as closer than it is, with posts titled Sino-U.S. Ties At ‘New Historic Starting Point.”

The Post has repeatedly denied requests to divulge how much money the receive from Chinese propaganda sources, and China Daily did not respond to a request from the Daily Caller on how much they pay for each insert. 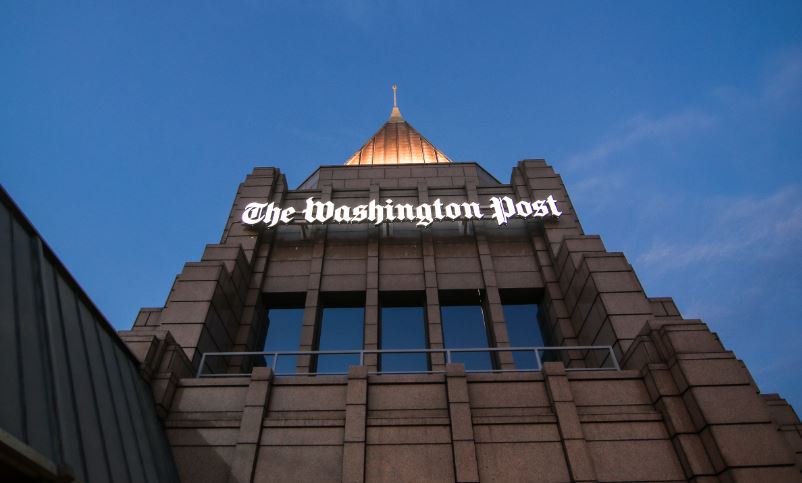 According to their website, the Post charges $34,340 per full page ad in its Sunday paper. If China Daily’s inserts are several pages long, each edition could garner six figures for the Washington Post per issue in which it runs. According to the Hong Kong Free Press, a year-long ad deal with the UK Telegraph cost 750,000 pounds, or more than a million dollars. It is likely that the deal with the Washington Post is even more lucrative. (RELATED: More Than 600 U.S. Companies Sign Letter In Support Of Trump’s Tariffs)

It should raise eyebrows that the editorial board of The Washington Post has been staunchly critical of the President’s policies towards America’s greatest geopolitical adversary, given this substantial income stream. The Post’s editorial board has run headlines critical of Trump’s china policies such as: “Trump’s Biggest Mistake In Trade War With China,” and “The Grave Consequence Of A US-China Schism.”

However, one editorial post in particular is perhaps more concerning than most. Earlier this year, the Trump administration placed additional sanctions on Huawei, a telecommunications company headquartered in China. The company operates in 170 countries, but pulled out of the U.S. last year. The company is worth over $700 billion dollars, but has consistently faced accusations of cyber-security violations (mostly from the U.S.) and was recently cut off from engaging in commerce in the U.S. amid accusations that it was skirting U.S. sanctions on Iran. (RELATED: REPORT: Google Distances Itself From Huawei After Trump Blacklists On Some Foreign Tech)

The Post followed up the Trump administration’s decision to cut off commerce with a scathing editorial titled: “The Trump Administration Owes The Public Answers About Its Restrictions On Huawei.”

The Post sided with China over the U.S. on a crucial national security issue. This is the same company that takes an undisclosed amount of money from Chinese state media.

On the other hand, the Post’s editorial board has not refrained from criticizing the communist country. The board has slammed China’s record on human rights with editorials titled: “People In Hong Kong Want Their Freedom. Beijing Is About To Say Tough Luck,” and “China’s High-Tech Repressions Threatens Human Freedom Everywhere,” both of which were highly critical of the regime’s poor human rights record.

We have no way of knowing how (or if) Chinese inserts affects the Washington Post’s coverage of key geopolitical issues, but the overall lack of transparency raises more questions than answers.