The Hill, a national political news outlet, erroneously tied a 2014 photo of migrant children sleeping in cages to a story about the current conditions of detention facilities at the border under the Trump administration.

The article in question was about a visit Democratic lawmakers paid to a Clint, Texas, Border Patrol station to investigate allegedly poor conditions in the detention center.

A photo featured with the article on social media, however, showed conditions at a separate camp in Arizona in 2014 under the Obama administration, which was dealing with a flood of unaccompanied minors at the time.

Matt Wolking, the Rapid Response Director for the Trump campaign, first pointed out the disconnected photo on Twitter.

This photo was taken in Arizona in 2014, when Joe Biden was Vice President. ⁦@thehill⁩ pic.twitter.com/yhBRGH60yn

In fact, the photo has been used so many times to dishonestly attack the Trump administration’s immigration policies, that the Associated Press wrote a fact check about the issue in May 2018.

“2014 photo wrongly used to hit Trump policies,” AP said, noting that the photos were taken by one of its photographers at the Customs and Border Protection Agency in Nogales, Arizona.

The Daily Caller previously reported on the overlooked conditions in Obama-era detention centers last year and pointed out that children were often left sleeping in cages and on the floor with nothing but foil blankets. (RELATED: Here Are The Photos Of Obama’s Illegal Immigration Detention Centers The Media Won’t Show You) 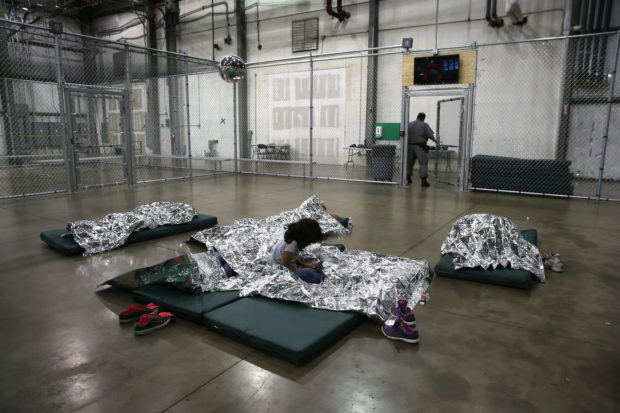 MCALLEN, TX – SEPTEMBER 08: A girl from Central America rests on thermal blankets at a detention facility run by the U.S. Border Patrol on September 8, 2014 in McAllen, Texas. The Border Patrol opened the holding center to temporarily house the children after tens of thousands of families and unaccompanied minors from Central America crossed the border illegally into the United States during the spring and summer. (Photo by John Moore/Getty Images)

Former vice president and current 2020 Democratic frontrunner Joe Biden has attacked President Donald Trump for his immigration policies but has refused to grapple with his own administration’s legacy at the border. Under the Obama administration, families were separated, children were kept in cages, and border patrol officers used tear gas on migrants far more often than under the current administration.