President Trump’s recent musings that maybe America should exit the “unfair” U.S.-Japan defense treaty surprised even his supporters. His opponents predictably blew a gasket. But as has happened before, Trump can be outlandish while also having a point.

Trump is legally correct. The treaty does not require Japan to defend American forces or America. But it also does not specifically require America to defend Japan.

Read the treaty text and it only obliges both sides to “consult” and to respond to armed attack in accordance with “constitutional provisions and procedures.” Nothing more. There is nothing about the U.S. 7th Fleet steaming out of Yokosuka and exterminating Japan’s enemies. (RELATED: Ivanka Wows In Beautiful Peach Floral Dress In Osaka)

However, both sides know the defense relationship will disintegrate if America doesn’t jump right in to defend Japan – and likewise if Japan does nothing in the event that U.S. forces or the United States are attacked.

For many years Japanese officials considered it impertinent for Americans to suggest Japan had an obligation – even a moral one – to assist U.S. forces under attack in or around Japan – much less somewhere else on the planet. 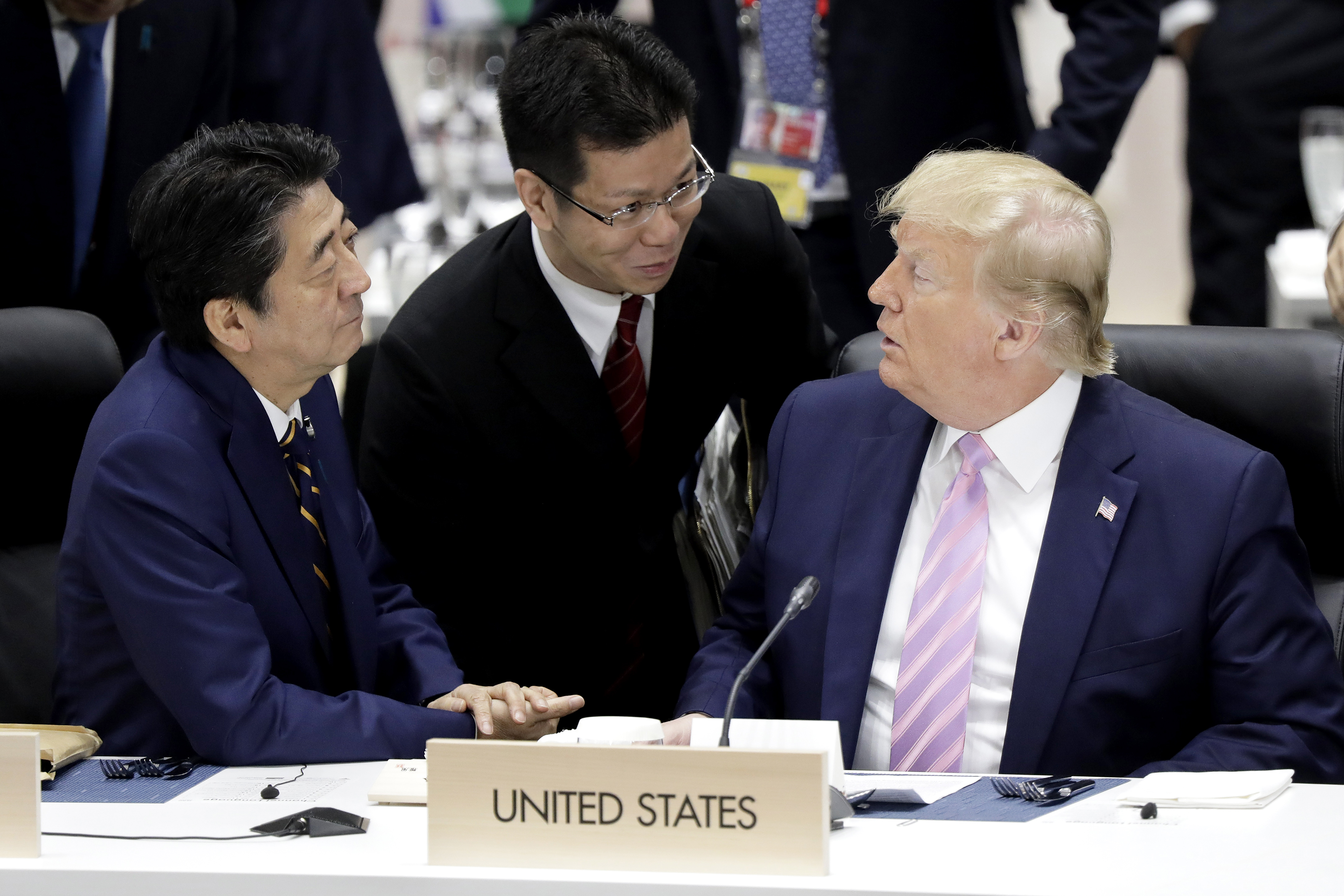 OSAKA, JAPAN – JUNE 28: Shinzo Abe, Japan’s prime minister (L), and U.S. President Donald Trump (R), talk prior to a working lunch on the first day of the G20 summit on June 28, 2019 in Osaka, Japan. U.S. President Donald Trump arrived in Osaka on Thursday for the annual Group of 20 gathering together with other world leaders who will use the two-day summit to discuss pressing economic, climate change, as well as geopolitical issues. The US-China trade war is expected to dominate the meetings in Osaka as President Trump and China’s President Xi Jinping are scheduled to meet on Saturday in an attempt to resolve the ongoing the trade clashes between the world’s two largest economies. (Photo by Kiyoshi Ota – Pool/Getty Images)

But following the 9/11 terrorist attacks, then Prime Minister Koizumi bucked both bureaucracy, political opponents, and public opinion and ensured Japan helped the U.S. – sending the Maritime Self Defense Force (MSDF) to the Arabian Sea, the Air Self Defense Force (ASDF) to Kuwait, and the Ground Self Defense Force (GSDF) to Iraq. Non-combatant activities to be sure, but it was something.

And since taking office in 2012, Prime Minister Abe has tried to expand the range of activities that the Japan Self Defense Force (JSDF) can engage in – to include potential combat operations in direct support of U.S. forces.

But Abe does not just snap his fingers and get what he wants. Despite some successes, the Prime Minister’s efforts to improve Japan’s defense have faced stiff opposition – especially within his own LDP party and the Japanese bureaucracy.

Here’s an intriguing possibility: Perhaps Mr. Trump is purposely stirring the pot? He could be targeting risk-averse Japanese officials and politicians who by nature wish to keep the JSDF on an unnecessarily tight leash.

But even if Trump’s comments were off-the-cuff rather than calculated – and were not hatched on the golf course – Abe may secretly be pleased, and welcome the pressure.

From Abe’s perspective, if his opponents think that ‘crazy Trump’ might withdraw U.S. forces and end the treaty – or even worse, that many Americans actually agree with the President (which they do) – that’s a good thing.  Cautious Japanese bureaucrats and politicians then might be more willing to increase defense budgets and do what is necessary to improve Japan’s defense.

This is known as gai atsu (foreign pressure). And it would not be the first time gai atsu has been used – and even welcomed by reform-minded Japanese – to force change in Japan, where taking initiative is resented more than admired. 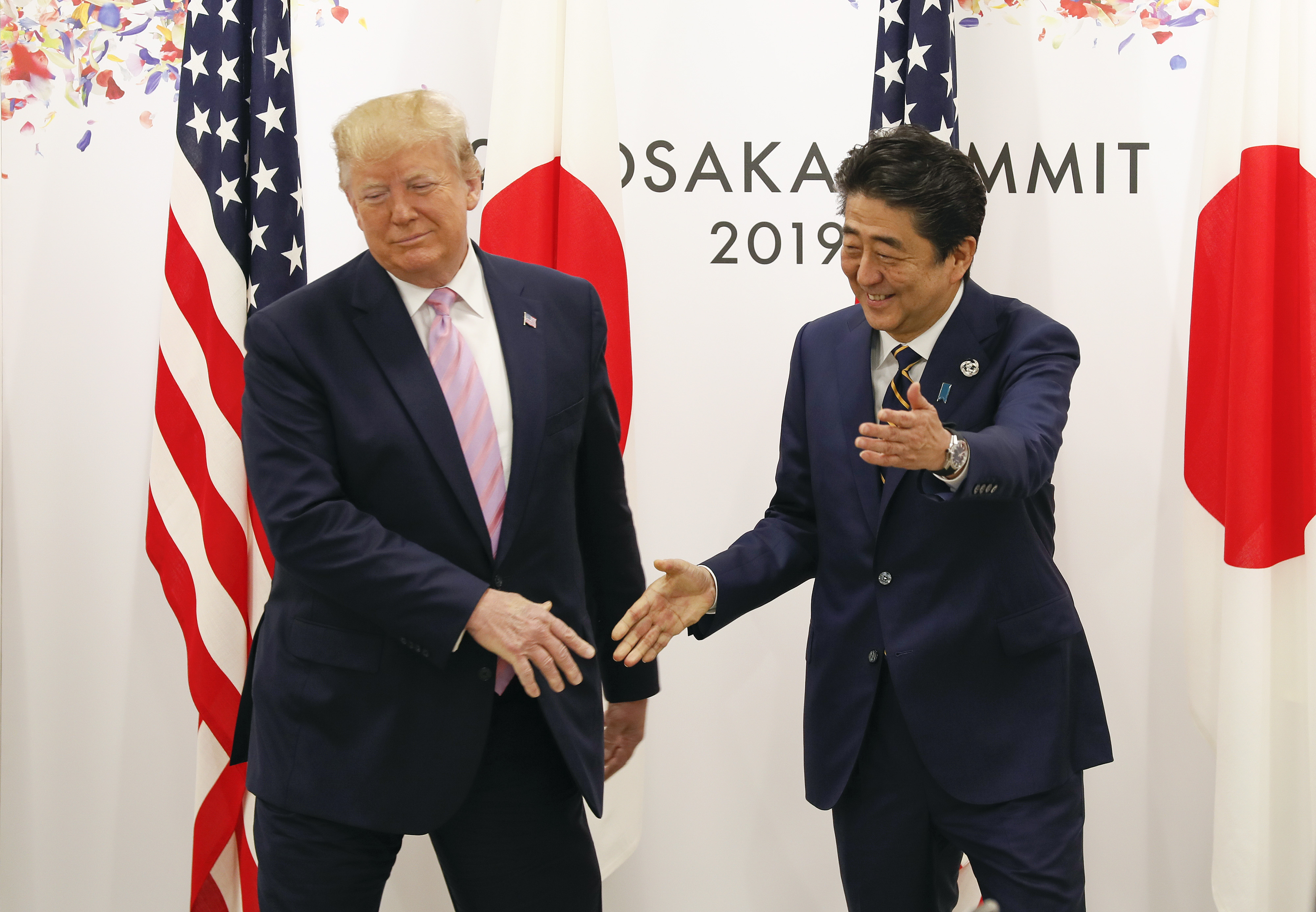 OSAKA, JAPAN – JUNE 28: U.S. President Donald J. Trump (L) with Japanese Prime Minister Shinzo Abe (R) at the start of talks at the venue of the G20 Summit on June 28, 2019 in Osaka, Japan. U.S. President Donald Trump arrived in Osaka on Thursday for the annual Group of 20 gathering together with other world leaders who will use the two-day summit to discuss pressing economic, climate change, as well as geopolitical issues. The US-China trade war is expected to dominate the meetings in Osaka as President Trump and China’s President Xi Jinping are scheduled to meet on Saturday in an attempt to resolve the ongoing the trade clashes between the world’s two largest economies. (Photo by Kimimasa Mayama – Pool/Getty Images)

In the 1990s when U.S. trade negotiators were trying to open up a particular part of the Japanese transport industry, their Japanese counterparts asked them to ‘go rough on us.’ Then they could tell Yakuza gangsters who dominated the industry that the negotiators had no choice in the face of foreign demands.

End the treaty and help the JSDF?

And there’s another overlooked angle to Trump’s comments: A JSDF serviceman told this writer that he wished Trump would go ahead and end the U.S.-Japan defense treaty. He is not anti-American. Quite the opposite. But he believes the Japanese government (GOJ) only acts when it experiences a crisis. And he suggests the U.S. pulling out of the treaty is the only way the Japanese government will feel that sense of crisis – and thus do what is necessary to fix the JSDF.

What needs to be fixed, and how to fix it

Nobody on the Japanese or American sides will say it, as they prefer reciting the mantra: “the relationship has never been stronger.” But the JSDF has serious problems. Foremost, it can’t recruit enough people. That’s not surprising given poor living conditions, low pay, lack of respect, and not enough money for proper training and equipment, all while missions and workloads increase. Beyond this, JSDF operational capabilities are inadequate.

Japan needs to spend more on defense. A ballpark figure is an extra $5-10 billion a year for the next five years. But they must spend it right. The defense hardware racket will gladly absorb it all. Instead, as top priority the government should spend what is needed to make service in JSDF a desirable, respected profession.

Otherwise Japan will sooner rather than later have an aged, demoralized force – and it won’t matter what shiny expensive equipment it has. The JSDF will then not be of much use to Japan – or for its overstretched U.S. partner.

While addressing the personnel issue, JSDF services should be forced to cooperate so they are a ‘joint force’ – or in other words, the ASDF, MSDF, and GSDF can conduct coordinated (joint) operations. As it is, they cannot, or at least not very well. And thus JSDF is less than the sum of its parts – perhaps operating at 10-20% of potential capability. Moreover, except for the two navies, U.S. and Japanese forces have very limited ability for joint operations with each other.

This is all as simple as it is obvious. But without a sense of crisis, nothing will change. It rarely does in Japan.

So if fear of the U.S. ending the defense treaty creates that sense of crisis in Japan’s ruling class, fine. That’s better than waiting until the Chinese sink an MSDF ship or grab an island in the Nansei Shoto (Japan’s southern islands), or a few North Korean missiles hit Tokyo.

Abe tried his best on defense, but Tokyo’s version of the swamp preferred to just buy Mr. Trump a Honma golf driver and butter him up. Japanese officials have been doing this to Americans – successfully – for decades.

So maybe Trump should be musing about the U.S.-Japan defense treaty more often. Abe won’t mind.

Grant Newsham is a Senior Research Fellow at the Japan Forum for Strategic Studies, and is a retired U.S. Marine Officer and a former U.S. Foreign Service Officer.