As President Donald J. Trump meets with G20 leaders in Osaka, Japan all eyes will be on his meetings with China’s President Xi. While the media will focus on trade, President Trump has long said the deal he is negotiating with Xi is designed to resolve all issues with China, not just trade.

One of the outstanding issues, which is indirectly related to trade and affects thousands of Americans who hope it will be addressed and resolved, is the little-known fact that China owes Americans a larger portion of its national debt than the U.S. owes China. It is time for China to pay its debt just as we pay ours.

What we call today the People’s Republic of China is the successor to the Republic of China government, which came to power in Dr. Sun Yat-sen’s 1911 revolution that ended over 2,000 years of imperial Chinese rule. On the 100th anniversary of the 1911 revolution, the Communist Party leadership gathered in the Great Hall of the People, claimed credit, as they always do, for China’s progress since 1911.

The truth is that China built itself up by taking Western money and refusing to pay it back. China went to the world capital markets from 1912 onward and raised tens of millions of dollars in a series of syndicated financings of Chinese Government Gold Bonds underwritten by banks from all the major industrialized nations of the world, including J.P. Morgan, Deutsche Bank, HSBC and the predecessors to Lehman Brothers and Citibank. China was then considered a close ally of the United States and thousands of American families did their patriotic duty by supporting our then-friend China by buying the bonds. These 60-year bonds require repayment by China in gold with liens on Chinese tax revenues as security. (RELATED: China Is Buying Influence In American Media, Does It Impact How They Cover The Communist Power) 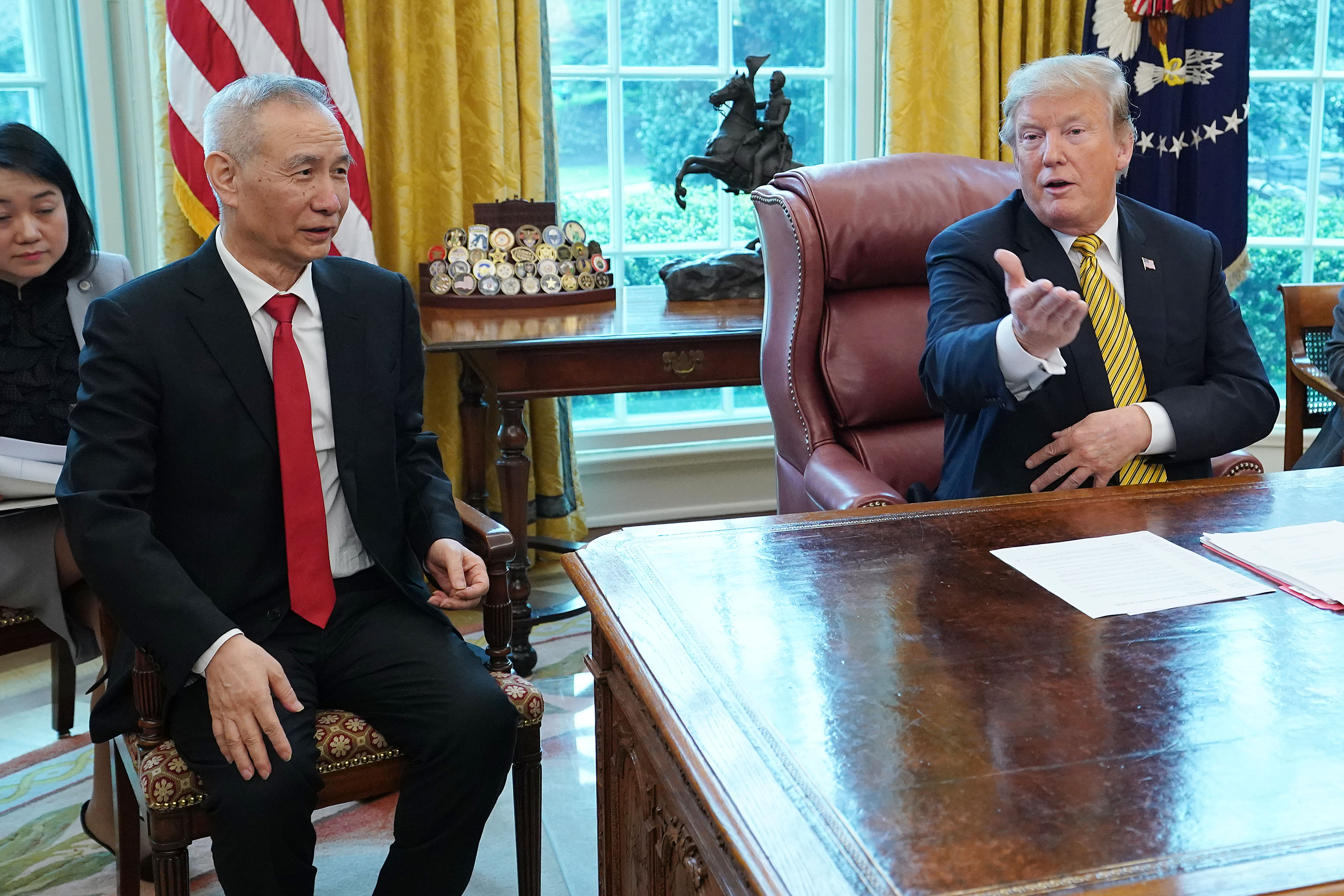 WASHINGTON, DC – APRIL 04: U.S. President Donald Trump (R) and Chinese Vice Premier Liu He talk to reporters in the Oval Office at the White House April 04, 2019 in Washington, DC. The New York Times reported Thursday that Trump is likely to announce plans for a future summit meeting with Chinese President Xi Jinping to resolve remaining trade issues and sign a final agreement between the U.S. and China. (Photo by Chip Somodevilla/Getty Images)

China defaulted on these debts in 1938. When the Communist party seized power in 1949 and renamed the country the People’s Republic of China, China claimed to be sole successor to all of the Republic of China’s rights under the successor state doctrine of international law, but disavowed the ROC’s obligations, including its sovereign debt. As the U.S Court of Appeals has stated: “A monarchy may be transformed into a republic, or a republic into a monarchy; absolute principles may be substituted for constitutional, or the reverse; but though the government changes, the nation remains, with rights and obligations unimpaired.”

If the PRC succeeds to the ROC’s rights, like a permanent seat on the U.N. Security Council and many others, then the same One China Policy requires the PRC to succeed to the ROC’s obligations.

Putin’s Russia took years to do so, but it paid off all Soviet-era debt. Yet the far wealthier PRC refuses to repay its national debt to Americans, even as it expects Americans dutifully to pay our national debt to the PRC. Actually, China goes well beyond a mere double standard. If other countries do not pay China their Belt and Road loans according to strict terms, China expects to seize the collateralized ports, airfields and other facilities as we have seen in many parts of the world. (RELATED: Trump: U.S.-China Trade Talks Are ‘Back On Track’ After G20 Meeting)

The sole exception China has made to its refusal to pay its defaulted sovereign debt to bondholders worldwide was when Margaret Thatcher demanded, as a condition of China’s access to London capital markets, that China repay British bondholders in 1987. At that time, a much poorer China paid pence on the pound, but China did pay to British bondholders the same bonds it refuses to pay to Americans. Today China can afford to pay Americans 100 cents on the dollar.

Rather than demand payment as Thatcher did, past U.S. administrations encouraged multinational corporations to invest in China, knowing that China is a defaulted debtor run by a Communist dictatorship that has built a protectionist economy on the backs of American workers. Democratic and Republican administrations did little or nothing to obtain repayment of China’s defaulted sovereign debt. They just helped campaign donors to offshore U.S. manufacturing, abuse Chinese workers and pollute at will. 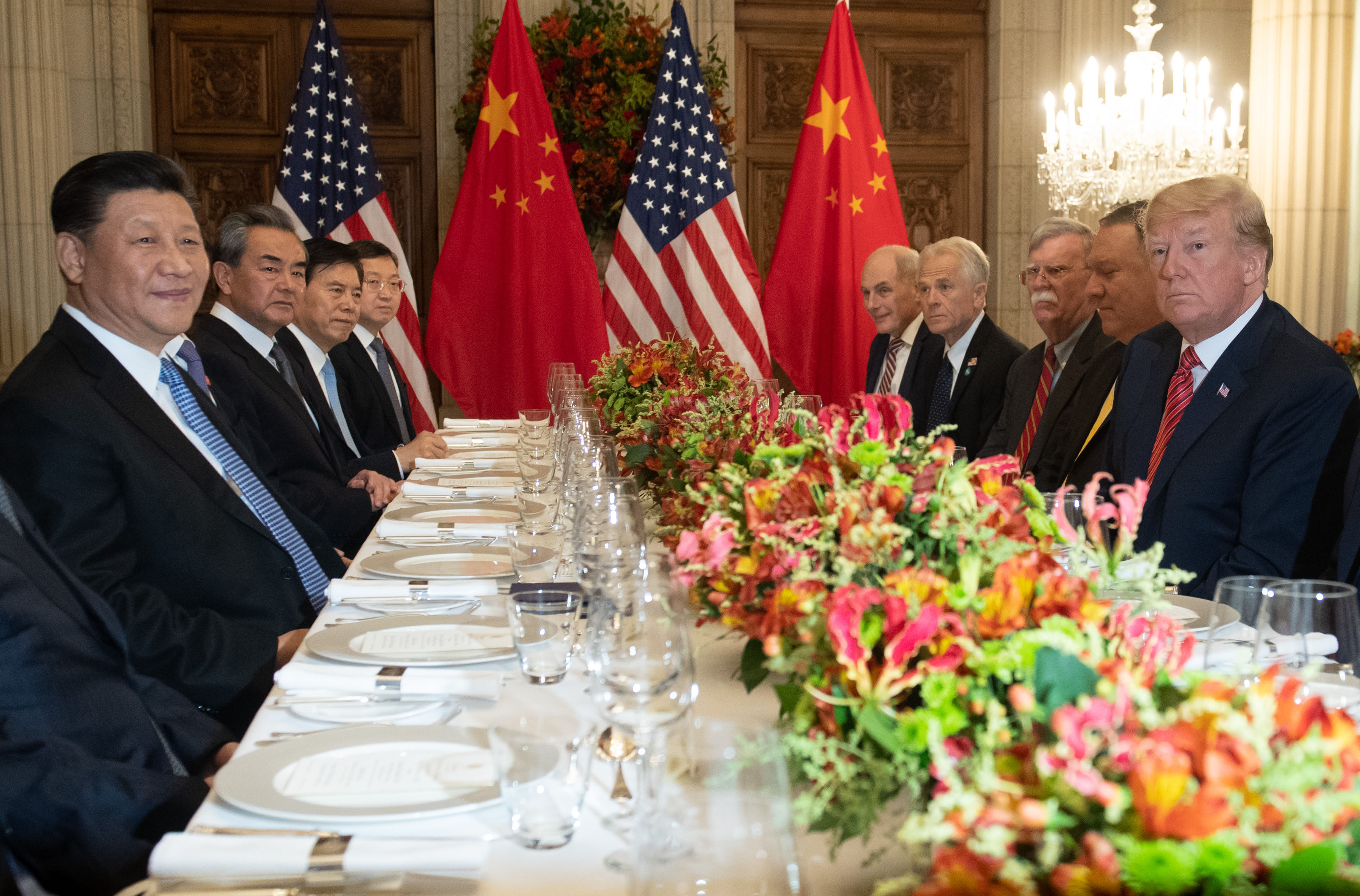 US President Donald Trump (R) US Secretary of State Mike Pompeo (2-R) and members of their delegation hold a dinner meeting with China’s President Xi Jinping (L) Chinas Foreign Affairs Minister Wang Yi (2-L) and Chinese government representatives, at the end of the G20 Leaders’ Summit in Buenos Aires, on December 01, 2018. – US President Donald Trump and his Chinese counterpart Xi Jinping had the future of their trade dispute — and broader rivalry between the world’s two top economies — on the menu at a high-stakes dinner Saturday. (Photo by SAUL LOEB/AFP/Getty Images)

President Trump promised as a candidate to put America first by using his unique force of will, intellect, and famous deal-making prowess to fix our disastrously unfair economic relationship with China. And he is now working hard to deliver on that promise, but he is surrounded by a powerful Wall Street lobby that — big surprise! — has friends in the Treasury Department. Wall Street has never lifted a finger to demand China pay its defaulted debt to Americans because the Americans who are owed live on Main Street, not Wall Street. The sooner the U.S. government stops letting the Goldman Sachs, Morgan Stanley and JP Morgan types run the U.S. Treasury, the better for America.

It is the sincere hope of over 20,000 American Main Street families, and by extension all Americans who would enjoy considerable stimulus to our economy from a settlement, that a deal maker like President Trump is not going to leave what is now well over $1 trillion of American wealth on the table with the PRC. With the rise of gold prices since default and the effects of compounded interest, China’s defaulted sovereign debt to Americans and to bondholders worldwide is just getting larger. (RELATED: The Massive ‘Pig Ebola’ Epidemic Will Give Trump Big Leverage In His Trade Standoff With China)

Fighting for these everyday Americans who own these bonds — and making China pay its sovereign debt — should be a key priority for the U.S. Department of the Treasury. Doing so would be an important and tangible step in Making American Great Again. We hope Treasury will find its way to telling China that, gee whiz, maybe the debt payments should run both ways and — maybe — could even be set off.

How can one have any positive expectations that the PRC will abide by the same rules as the rest of the world — be it complying with WTO obligations, fair trade or stopping the theft of our intellectual property if they can’t even be held to the simplest obligation to repay their sovereign debts?

Jonna Z. Bianco is the President of the American Bondholders Foundation, LLC formed in 2001 to collect on the Chinese Government’s pre-1949 debt held by some 20,000 U.S. families from 46 US states.