The Trump administration will not include a citizenship question on the 2020 census form, the Justice Department said Tuesday.

The decision comes after the Supreme Court found Commerce Secretary Wilbur Ross concealed his reasons for adding the citizenship question, and cleared the way for further proceedings. The Commerce Department supervises the Census Bureau.

“The decision has been made to print the 2020 decennial census questionnaire without a citizenship question,” a Justice Department lawyer wrote in an email shared on Twitter. “The printer has been instructed to begin the printing process.”

Ross promised to complete a precise count in a late Tuesday statement.

“I respect the Supreme Court but strongly disagree with its ruling regarding my decision to reinstate a citizenship question on the 2020 Census,” the secretary said.

“The Census Bureau has started the process of printing the decennial questionnaires without the question,” Ross added. “My focus, and that of the Bureau and the entire Department is to conduct a complete and accurate census.”

A legal challenge to the citizenship question proceeded through the federal courts on an expedited basis due to time constraints. Government lawyers said the Census Bureau needed to finalize the questionnaire by July 1 to ensure timely printing and distribution. The Supreme Court agreed to hear the case in an accelerated procedural posture given the press of time.

However, some census officials suggested the government could delay printing until October, raising the prospect that the government could ultimately add the citizenship question if it prevailed in another round of litigation. With Tuesday’s announcement, the administration is abandoning any further legal action.

The government’s announcement came shortly before a scheduled conference in a separate challenge before a federal court in Maryland. That case addresses late-breaking allegations that top Trump officials conspired with a Republican redistricting consultant to include the citizenship question for partisan reasons. Those charges, likely mooted by Tuesday’s decision, never reached the Supreme Court.

“In light of the Supreme Court’s ruling, the Trump administration had no choice but to proceed with printing the 2020 census forms without a citizenship question,” said ACLU lawyer Dale Ho, who argued the census case before the justices. “Everyone in America counts in the census, and today’s decision means we all will.” (RELATED: Supreme Court To Decide On Trump’s Power To End DACA) 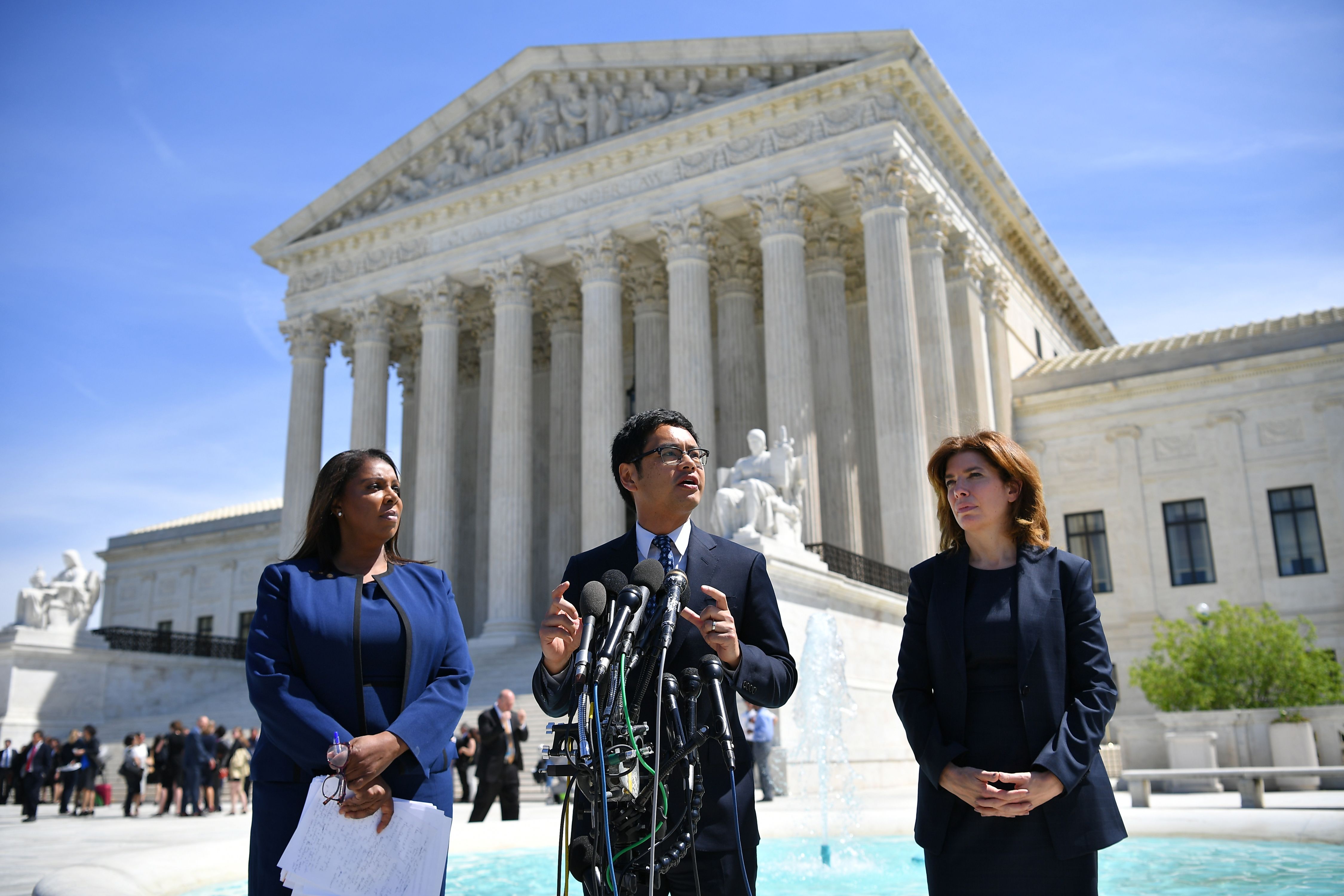 The Commerce Department said it was collecting citizenship data to help the Justice Department improve enforcement of the Voting Rights Act (VRA). In his opinion for the high court, Chief Justice John Roberts called that explanation “a distraction,” saying government officials must give legitimate reasons for their actions to ensure proper supervision by courts.

“Unlike a typical case in which an agency may have both stated and unstated reasons for a decision, here the VRA enforcement rationale — the sole stated reason — seems to have been contrived,” Roberts wrote.

“If judicial review is to be more than an empty ritual, it must demand something better than the explanation offered for the action taken in this case,” he wrote elsewhere in the decision.

The high court’s liberals formed a majority with the chief to find that Ross was concealing his rationale, while the conservatives joined portions of Roberts’s opinion rejecting other complaints the plaintiffs lodged. For example, the Court dismissed arguments that the citizenship question violates the Constitution’s enumeration clause, which requires an “actual enumeration” of persons.

The plaintiffs said a citizenship inquiry would depress participation, particularly among immigrant communities, and cited studies to that effect. But the Court noted demographic questions have appeared on the questionnaire for decades. Citizenship questions in particular are a common feature of census forms in other countries. What’s more, it is illegal under the Census Act for the bureau to share its data with law enforcement.

The administration’s retreat adds uncertainty to an escalating fight between the White House and House Democrats over a congressional subpoena for documents relating to the census. The House Oversight Committee voted to hold Ross and Attorney General William Barr in contempt of Congress for failing to comply with its subpoenas in June. That move came after President Donald Trump claimed executive privilege over the materials Democrats are seeking.

Democrats said Trump’s decision kept with a pattern of obfuscation, while administration officials and their Republican allies in Congress said the Department was engaging in good faith negotiations over the scope of document production with the Oversight Committee was abusing the contempt power.

The trajectory of that dispute is unclear, now that the Commerce Department has scrubbed its plans.

Trump suggested he would delay the 2020 census until the dispute is resolved in a pair of tweets following the Supreme Court’s ruling.

The Constitution requires a census once per decade to apportion seats in Congress among the states. Federal funding is also awarded on the basis of population.