President Donald Trump requested tanks for his massive Fourth of July celebration, and it looks like he’ll get them.

Two tanks were transported from Fort Stewart in Georgia by train and are currently sitting idle on a freight train in southeastern Washington, DC, according to a report by the Associated Press. Alongside the two M1A1 Abrams tanks are four other military vehicles, all of which are being guarded by military police.

Two M1A1 Abrams tanks and other military vehicles sit on guarded rail cars at a rail yard in Washington, D.C.

Trump told reporters Monday that tanks would be stationed outside of the “Salute to America” parade on Thursday, but noted that they would not be rolling through DC as to avoid causing damage to roadways.

Some tanks and other Army vehicles sit on a DC train track in advance of Pres Trump’s “Salute to America” event at the Lincoln Memorial on the Fourth of July. But won’t be paraded to spare damage to DC street pavement. pic.twitter.com/HqETLbrKNX

The New York Times released a report Tuesday questioning how exactly the tanks would be transported to DC, considering that Arlington Memorial Bridge would likely be unable to support the massive weight from the military vehicles. 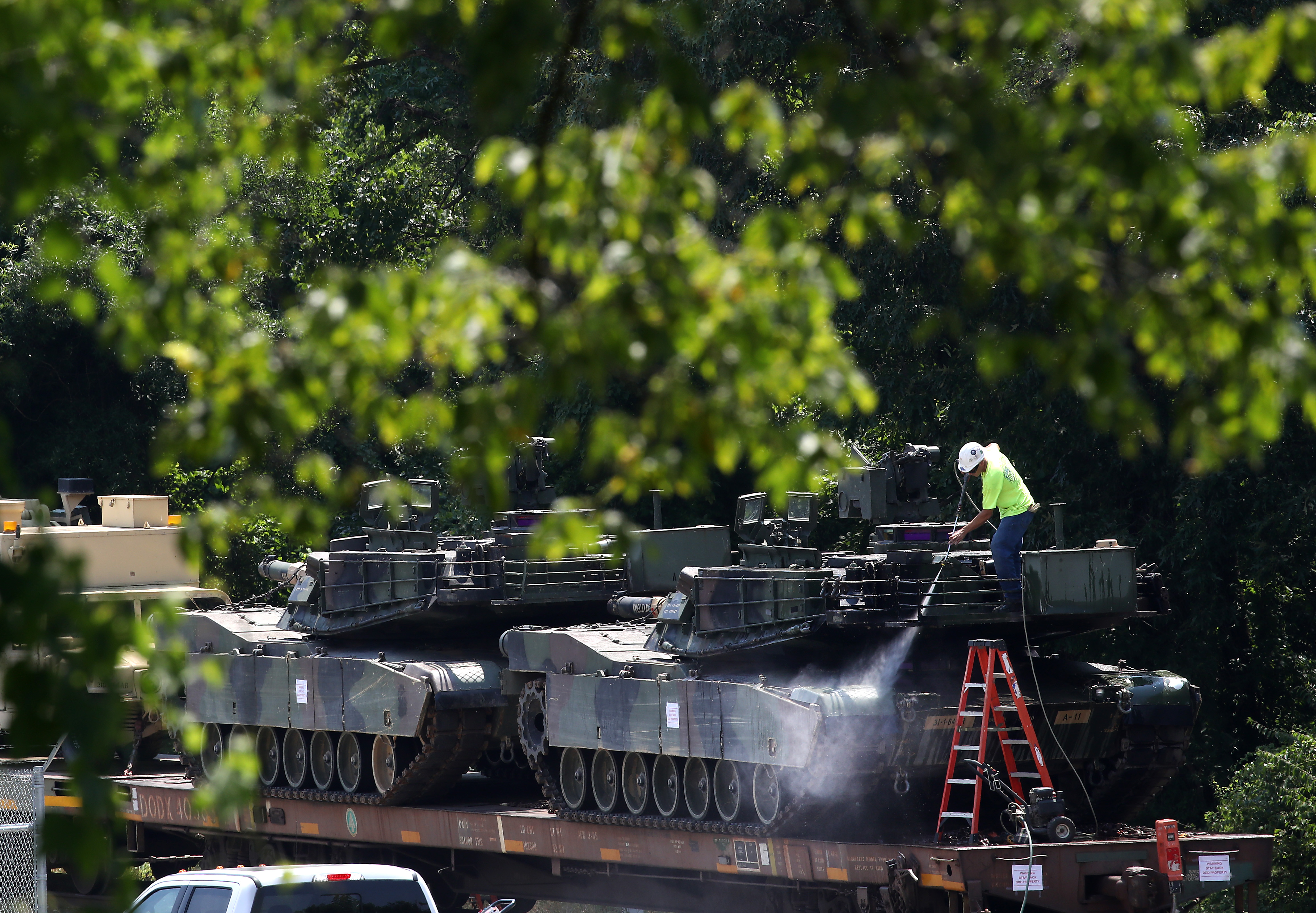 WASHINGTON, DC – JULY 02: A worker washes one of two M1A1 Abrams tanks that are loaded on rail cars at a rail yard on July 2, 2019 in Washington, DC. President Trump asked the Pentagon for military hardware, including tanks, to be displayed during Thursdays July 4th Salute to America celebration at the Lincoln Memorial. (Photo by Mark Wilson/Getty Images)

“Among the logistical concerns was how to transport tanks that weigh more than 60 tons into the popular downtown area where tourists gather to see the monuments,” the Times said. “Another problem is that Arlington Memorial Bridge, which spans the Potomac River and connects Arlington National Cemetery and the Lincoln Memorial, might not be able to hold the weight.”

The Times also guessed that the tanks would have to be transported by rail or flatbed truck.

The president shared a guide from the Department of Interior (DOI) telling attendees what to expect at the parade. (Trump Plans Patriotic ‘Salute To America’ Parade For Fourth Of July)

The event will feature a flyover by the U.S. Navy Blue Angels, the longest and largest fireworks show ever in the capital, performances by the U.S. Army Band and United States Marine Corps Silent Drill Team, and much more.