Google’s anti-harassment and anti-discrimination training contains materials covering the use of preferred pronouns, including ones for individuals who believe they are “non-binary.”

The instructions at the top of the training materials instruct the Googler to, “Read the following dialogue” and flag “any harassment, discrimination, or other inappropriate conduct.”

A screenshot from the training materials shared with The Daily Caller shows an example in which “Sol” refers to colleague Lee as a “she.”

“You mean they, Sol,” his manager says. “Lee has asked you repeatedly to use the pronouns ‘they,’ ‘their,’ and ‘them’ when referring to them.”

“I know, but it just seems so ridiculous. She’s obviously a woman,” Sol replies.

“No big deal, especially since Lee isn’t here right now. So we’ll see you down there?” says the manager. 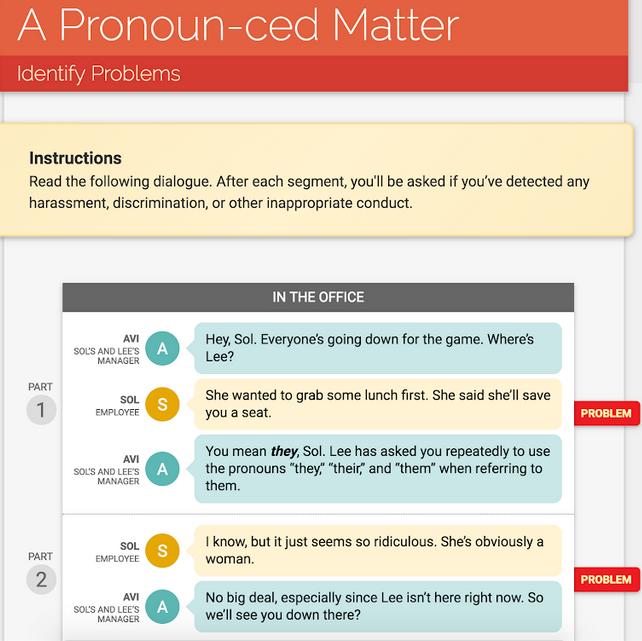 Google’s human resources materials have come under fire before. John Shinal at CNBC suggested that Google’s diversity training materials may have contributed to the former Google engineer James Damore’s sense that he was being silenced. In those materials, Googlers were discouraged from “Debating whether bias exists at your organization.” (RELATED: Inside Google’s Microaggressions Newsletter: Pronoun Problems, Soy Police, And A Deaf Person Told To Watch Her ‘Tone’)

A spokesperson for Google told The Daily Caller that an employee failing to use the right pronouns would not be grounds for a discrimination complaint.

However, Google’s updated “Policy on harassment, discrimination, retaliation, standards of conduct, and workplace concerns,” released after the walkout last November, does suggest that protected statuses for discrimination and sexual harassment “may include … gender, gender identity, gender expression, transgender status, or sexual stereotypes.”