Speaking with KLSA News 12 reporter Jeff Ferrell after a meeting with high-ranking officers at Louisiana’s Barksdale Air Force Base on Tuesday, Kennedy took particular issue with the New York Democratic congresswoman’s refusal to vote for humanitarian aid over conditions she has called “inhumane.”

“Let me be frank,” Kennedy said. “Congresswoman Ocasio-Cortez … someone needs to tell her that the voices in her head are not real. She says that the men and women of our border patrol and our authorities are intentionally running concentration camps on the southern border. She needs to go to the Holocaust Museum and see what a concentration camp is.” 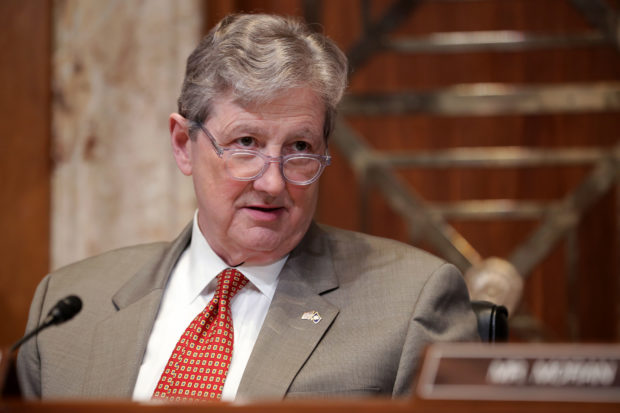 Kennedy noted the overwhelming numbers of people coming into the country, to the tune of 5,000 a day, and the lack of anywhere to put them. (Kellyanne Conway Throws Down with Ocasio-Cortez: ‘All Talk, No Dollars’)

“The Department of Homeland Security is out of money and the congresswoman knows that. She says the conditions are inhumane,” Kennedy explained. “But yet, when we send a bill over to her to vote to improve those conditions, she voted no. Her hypocrisy is breathtaking. This is the bottom line: Congresswoman Ocasio-Cortez believes that illegal immigration is a moral good. And she believes that the border is just a nuisance and it should be open; and, I don’t think that’s what America believes.”

After touring a border detention facility Monday, Ocasio-Cortez accused ICE officers of holding detainees in cells with no potable water and telling them to drink from toilets. She also said agents “physically & sexually threatening” her. Art Del Cueto, vice president of the National Border Patrol Council, called her claims “lies” in an interview with the Daily Caller.