In “Justice on Trial” authors Mollie Hemingway and Carrie Severino say unnamed peers accused Ford of drinking to excess and accosting boys with some regularity as a student at the Holton-Arms School, a contrast with press accounts that cast her as innocent and naive during that period. Ford accused Kavanaugh of sexually assaulting her during a 1982 house party in suburban Maryland when they were high school students.

“Female classmates and friends at area schools recalled a heavy drinker who was much more aggressive with boys than they were,” Hemingway and Severino write of Ford. “‘If she only had one beer’ on the night of the alleged assault, a high school friend said, ‘then it must have been early in the evening.’ Her contemporaries all reported the same nickname for Ford, a riff on her maiden name and a sexual act.”

“They also debated whether her behavior in high school could be attributed to the trauma of a sexual assault,” the authors added. “If it could, one of them said, then the assault must have happened in seventh grade.”

The anonymous sources who shared those accounts were reluctant to come forward because “hostility to Kavanaugh made them fear for their livelihood if their names were attached to the stories,” the authors wrote.

Holton-Arms yearbooks the authors obtained provide a contemporaneous narrative about the school’s social scene. Like Kavanaugh’s own yearbooks from Georgetown Preparatory School, the Holton-Arms annual is replete with sexual innuendo and explicit references to underaged binge drinking, among other debauched themes.

“The pages that follow contain references to ‘Playboy Bunnies’ and things that are ‘X-rated’ as well as pictures of beer and rum,” Hemingway and Severino write of the 1982 yearbook. “The same volume boasts a cavalcade of off-color jokes about ‘furburgers vs. Cheeseballs,’ ‘6 Caucasian females, one Caucasian male,’ and ‘Halloween-whores,’ as well as a lewd riff on the ‘tube snake boogie.'”

“This depiction of Holton-Arms as Studio 54 on the Potomac may be nothing more than adolescent posturing, and only the alumnae can judge how accurately it reflects their social life in the early 1980s,” the authors write. “But it is clear that a lack of vigilance by the yearbook’s faculty adviser and bacchanalian extracurricular activities were by no means unique to Georgetown Prep.” (RELATED: It’s Not Donald Trump’s Supreme Court Yet)

Kavanaugh’s Georgetown Prep yearbooks were subject to intense scrutiny in the press and before the Senate Judiciary Committee. Democratic Vermont Sen. Patrick Leahy asked Kavanaugh to explain the “drinking and sexual exploits” described in his own yearbook entry during Kavanaugh’s second round of testimony. Democratic Rhode Island Sen. Sheldon Whitehouse followed on with more probing questions, asking Kavanaugh to explain references to “boofing” and “the devil’s triangle.” 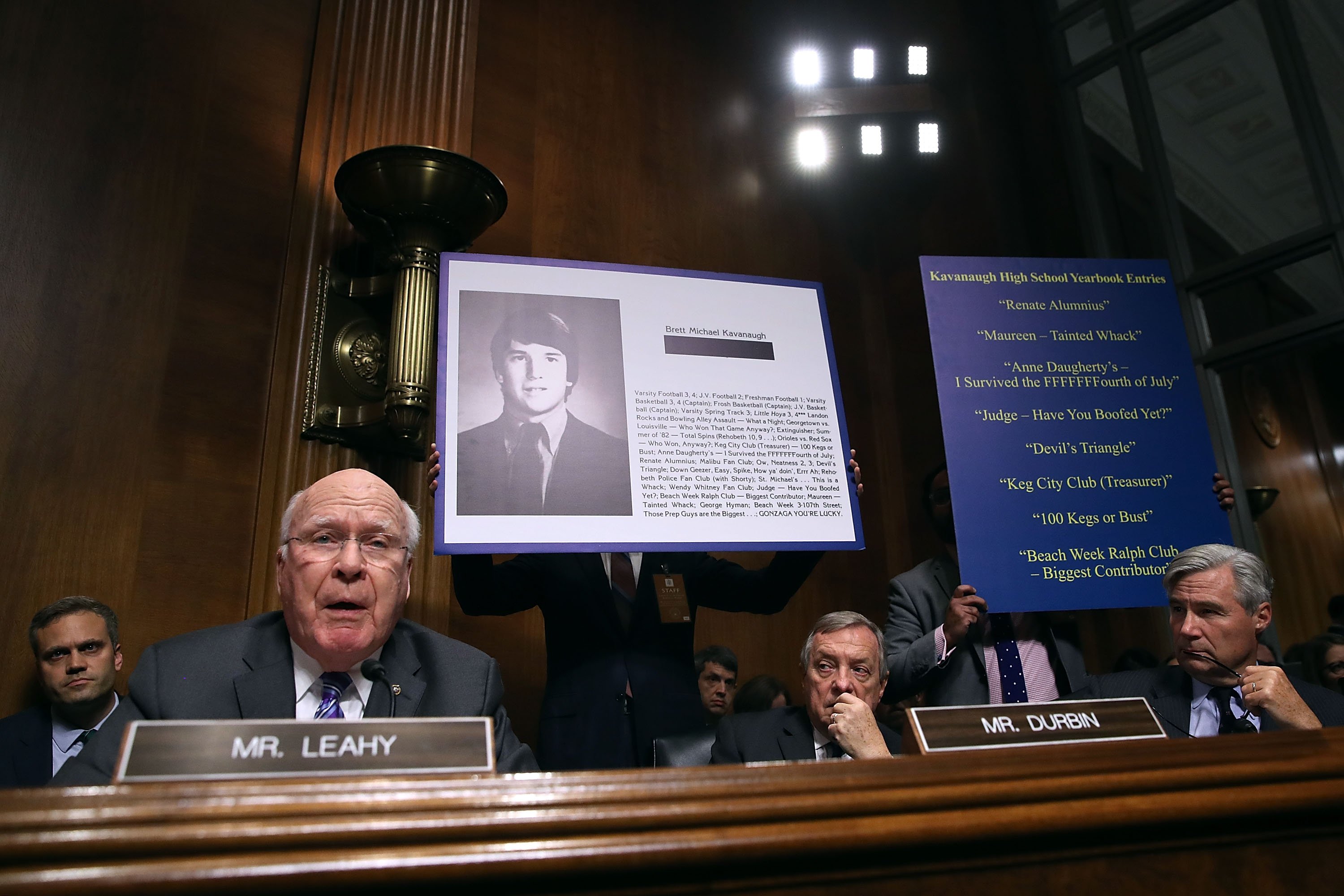 “One of the reasons, Mr. Kavanaugh, that we are looking at the yearbook is that it is relatively consistent in time with the events at issue here,” Whitehouse told the justice during the Sept. 27 hearing.

Kavanaugh countered that “boofing” was slang for flatulence, and “the devil’s triangle” was a drinking game involving three beers arranged in a pyramid formation. He denied they had any salacious connotations.

Lawyer Michael Avenatti, who represented another Kavanaugh accuser called Julie Swetnick, said the justice was alluding to depraved sex acts in his yearbook listing. Swetnick alleged that Kavanaugh facilitated gang rapes at house parties during the early 1980s. She qualified those allegations in interviews with the press that followed her original charge. Republican lawmakers asked the Department of Justice to investigate Avenatti and Swetnick for providing false statements to Congress in October 2018.

Hemingway and Severino interviewed more than 100 people for the book, including President Donald Trump, seniors members of the administration, justices of the Supreme Court and members of Congress. The book will appear before two others that are expected to be less flattering to the justice.

Hemingway is a Fox News commentator and senior editor of The Federalist, while Severino is chief counsel of the Judicial Crisis Network (JCN), an advocacy group that supported Kavanaugh’s confirmation.

The book “Justice on Trial: The Kavanaugh Confirmation and the Future of the Supreme Court” from Regnery Publishing is available Tuesday.