After explaining his position in favor of /decriminalizing border crossings, Buttigieg pivoted to a rebuke of Republicans who are okay with the Trump administration’s policy of separating children from their parents at the border.

“The Republican Party likes to cloak itself in the language of religion,” he said. “Now our party doesn’t talk about that as much, largely for a very good reason, which is we are committed to the separation of church and state, and we stand for people of any religion and people of no religion.”

“But we should call out hypocrisy when we see it,” he continued. “And for a party that associates with Christianity to say it is okay to suggest that God would smile on the division of families at the hands of federal agents, that God would condone putting children in cages has lost all claim to ever use religion language again.”

The long shot candidate risked alienating large swaths of the country with the remark. Nearly 50 percent of Republicans and 1 in 5 independents said Trump’s enforcement of the separation policy at the border is “acceptable” in an April poll published by the University of Maryland. A June CBS poll found 36 percent of Republicans continued to support the policy. A small percentage of Democrats also said they are okay with the policy. (RELATED: Buttigieg Says Democrats Must Swing Further Left To Beat Trump In 2020)

But it’s a risk he’s apparently decided to take, amplified by a heavy emphasis on his identity as a gay Christian. In the weeks before his campaign officially launched, he generated a wave of headlines by picking a fight with Vice President Mike Pence over his views on gay marriage. The two have known each other for years, going back to their time in Indiana politics (Pence is a former governor of the state), but Buttigieg lashed out at Pence, unprompted, at an LGBTQ campaign event in early April. 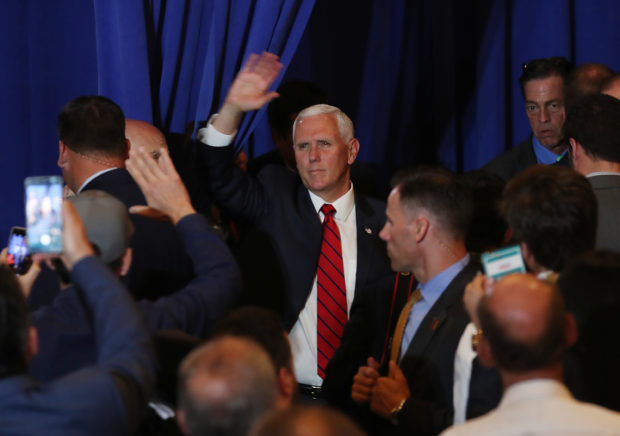 “If me being gay was a choice, it was a choice that was made far, far above my pay grade,” he said. “And that’s the thing I wish the Mike Pences of the world would understand. That if you got a problem with who I am, your problem is not with me — your quarrel, sir, is with my creator.”

The remark drew a response from Pence, who said he has no issue with Buttigieg and cast it as a political ploy to gin up support from the Democratic base. “He said some things that are critical of my Christian faith and about me personally,” Pence said. “And he knows better. He knows me. But I get it. You know, it’s — look, again, 19 people running for president on that side in a party that’s sliding off to the left. And they’re all competing with one another for how much more liberal they can be.”

Pence is against gay marriage, but has no record of discriminating against gays, or singling out Buttigieg in any way. When Buttigieg came out as gay in 2015, Pence said: “I hold Mayor Buttigieg in the highest personal regard. I see him as a dedicated public servant and a patriot.” (RELATED: Stop Calling Mike Pence Homophobic)

Hours before Buttigieg called out Pence, he suggested the tens of millions of evangelical Christians who support Trump are hypocrites in an interview with Chuck Todd on NBC’s “Meet the Press.”

Todd asked Buttigieg how he reconciles the evangelical community’s support for Trump, given his previous remark that he doesn’t think Trump believes in God. “It’s something that frustrates me, because the hypocrisy is unbelievable,” Buttigieg said.

“Here you have somebody who not only acts in a way that’s not consistent with anything that I hear in scripture, in church, where it’s about lifting up the least among us and taking care of strangers, which is another word for immigrants, and making sure that you’re focusing your effort on the poor, but also personally how you’re supposed to conduct yourself — not chest thumping look at me-ism, but humbling yourself before others,” he continued. “Foot washing is a central image in the New Testament.” 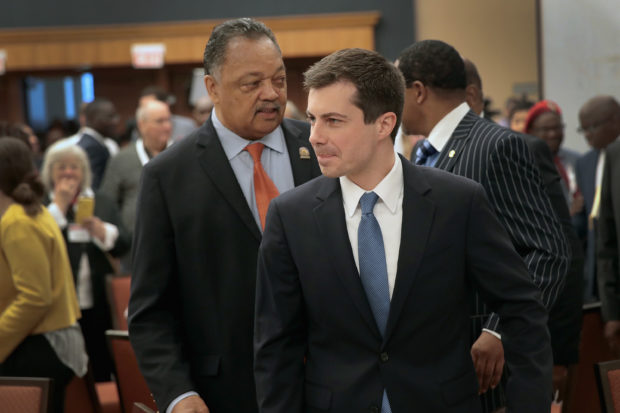 “And we see the diametric opposite of that in this presidency,” he said. “I think there was a cynical process where he decided to, for example, begin to pretend to be pro-life and govern accordingly, which was good enough to bring many evangelicals over to his side. But even on the version of Christianity that you hear from the religious right, which is about sexual ethics, I can’t believe that somebody who was caught writing hush money checks to adult film actresses is somebody they should be lifting up as the kind of person you want to be leading this nation.”

Trump has consistently gotten high marks from voters who identify as white evangelical Christians. Pew Research Center polling has shown a consistent majority of them approve of Trump’s job as president, ranging from 50 to as high as 79 percent. (RELATED: The Biggest Takeaway From The Second Democratic Debate: Open Borders)

A spokesman for the Buttigieg campaign declined to comment, but pointed the Daily Caller to a series of remarks he said “sum up” how Buttigieg approaches talking about faith. One was his remark in the debates, the other two were comments in which he talked about “reclaiming” faith from the religious right and refuting the idea that they have a “monopoly” on faith.

“The idea that the only way a religious person could enter politics is through the prism of the religious right, I just don’t think that makes sense,” he said on MSNBC in May.

Buttigieg also drew a parallel between Christianity and radical Islamic terrorism that same month, when radio host Hugh Hewitt asked him which strain of radical Islam he thinks is the most dangerous. “Well, you know, not unlike Christianity when it is motivating someone to do something extreme, it can have a thousand different flavors,” he replied.

His repeated digs, framed by his identification as a gay Christian, have generated affirming headlines and even applause from the liberal press. “How to Break the Republican Lock on God,” read the headline of an April op-ed in The New York Times, which praised Buttigieg for aggressively targeting the Trump administration on religious grounds. “He’s taking it directly to Trump and to Vice President Mike Pence, who flashes his piety like a seven-carat diamond on his pinkie finger,” the piece read.

“Buttigieg slams Republicans for their use of religion,” a CNN headline read. And in the Atlantic, “Pete Buttigieg Takes Aim at Religious Hypocrisy.” Another headline in the liberal mag Sojourner proclaimed, “Pete Buttigieg exposes the Christian right’s moral contortions.”

One politics reporter at The Washington Post cautioned, though, that he risks alienating the Trump supporters he may need to win the White House. “If Republican voters feel personally attacked by Buttigieg’s interpretation of their personal faith, their interest in him may fade,” Eugene Scott wrote. “For a centrist candidate relying more on likability than policy to maintain support, he could be risking his political appeal.”