Meghan Markle reportedly didn’t want people taking pictures of her during her recent outing to Wimbledon to cheer on pal Serena Williams and it has created a backlash against the royal.

It comes following the Duchess of Sussex’s surprise appearance last week at the championship game after media consultant Sally Jones, who was sitting in the same row as the former “Suits” actress, was reportedly told by the royal protection officers that the duchess was attending the event “in a private capacity” and not to take her photo. (RELATED: Duchess Meghan Markle Reportedly Plans To Raise Royal Baby Gender Neutral)

“I told him it was bonkers and even if I had been trying to snap the Duchess [of Sussex], I’d have got a blurry picture of her right ear,”Jones told the U.K. Daily Telegraph, per Page Six in a piece published Tuesday. 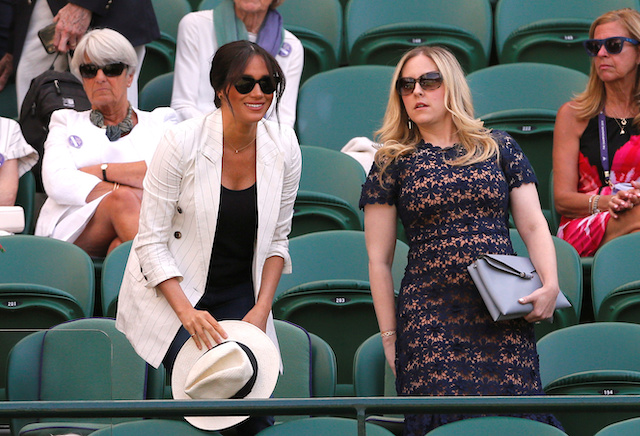 “He [the protection officer] appeared a bit mystified as to why he was being asked to make such a request,” the consultant shared, claiming that the officer looked “quite embarrassed” about it.

“Apart from anything else, there were hundreds of people clicking away,” she added. “I said to him, ‘Have you thought about having a word with any of those television cameras?’ He looked a little uncomfortable.”

Apparently such a request was not unheard of, per a palace insider.

It comes, after Markle and Prince Harry made waves after reports surfaced in April that the palace wouldn’t be announcing it to the world right after she had given birth to her first child, allowing the duke and duchess time to celebrate the birth in private.