As the 2020 presidential election cycle kicks into high gear, Democrats across the country are expected to heavily court the youth vote, but one conservative student group is hoping to counter their influence.

Conventional wisdom suggests that most college students are partisan Democrats. It’s true that college campuses are often liberal bastions, with over 90% of party-affiliated college professors being registered as Democrats. (RELATED: Colleges And Universities Are Creating A Lost Generation Of Americans)

But, a group of young conservative activists are hoping to turn the tide, and bring younger voters into President Donald Trump’s camp in 2020. They intend to emphasize the economic accomplishments of Trump’s administration, as well as the president’s populist message to appeal to young voters.

Ryan Fournier founded “Students for Trump” in 2015, and hopes that the message that inspired him will also inspired a new generation of college students. (RELATED: Trump Will Delay Deportations To Work ‘Solution’ With Congress)

“I became intrigued with topics that Donald Trump was highlighting in his campaign, from simplifying the tax code to his hardline approach on destroying ISIS,” Fournier told The Daily Caller. “These policy issues are just two of the many he proposed that just made sense. His rhetoric and dialogue appealed to many GOP voters who were sick and tired of electing politicians that go to Washington on the promise of change, only to then become what they claimed they wouldn’t: a career politician.”

This go-around, “Students for Trump” will be chaired by Charlie Kirk, the founder of Turning Point USA who called Trump “the greatest president of our generation.”

“The road to the White House goes straight through college campuses,” Kirk told the Daily Caller.

Fournier is staying on as a co-chair, and along with Kirk, will lead a team of 150 staffers hoping to eat into the Democratic nominee’s share of the youth vote. The goal: To enlist 1 million students to support President Trump. (RELATED: African-American Conservatives Lobby Senators In Favor Of ‘First Step Act’)

“This is the most aggressive voter identification GOTV program targeting students on college campuses for a Republican president ever” Fournier said. “The goal here is to identify young Republicans on college campuses, educate, motivate, and inspire them to get out and vote and get them to the polls.”

The group is not affiliated with the President’s official reelection campaign, but hopes to make a pivotal difference in a Trump victory next year, and build a coalition that can compete into the future.

Fournier also slammed attempts from 2020 Democratic candidates to pander to the youth by promising to pay off student loans, saying that such a promise is unrealistic and offers false hope to millions of young Americans. He sees the brashness of many of the Democratic candidates as an opening for Republicans to garner the youth vote with fresh ideas of their own.

“The youth are the future of this country. The long stretch to the White House goes right through college campuses,” Fournier said. “The Left has been using this to their advantage by targeting students with policies, such as “eliminating” student loan debt – which is nothing more than a plan to transfer existing debt from students to the American taxpayer.”

Kirk said that the Democratic nominee will have to be able to excite college students the way former President Barack Obama did, something former Secretary of State Hillary Clinton failed to do in 2016.

“They have to over-perform on college campuses in order to win,” Kirk said.

During the first Democratic debates, Kirk noticed the urgency the 2020 candidates demonstrated when many proposed a massive student loan bailout, and accused Democrats of attempting to “bribe” young people for votes. Kirk believes the correct way for conservatives to respond to this is simple.

“We have to frame the terms of the debate,” Kirk said. “It’s the greatest economy in American history versus an unachievable utopia.” 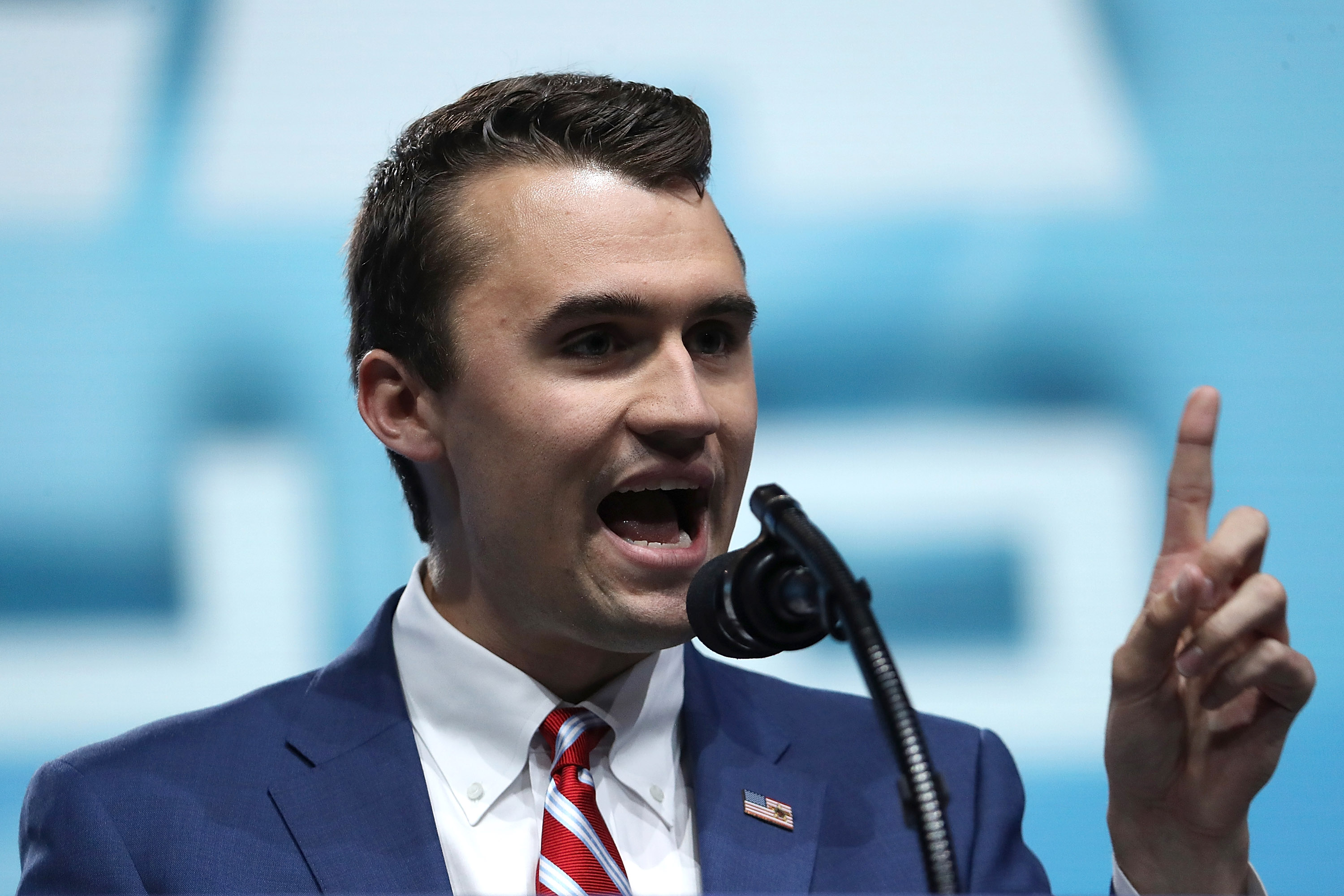 Charlie Kirk, founder and executive director of Turning Point USA, speaks at the NRA-ILA Leadership Forum during the NRA Annual Meeting & Exhibits at the Kay Bailey Hutchison Convention Center on May 4, 2018 in Dallas, Texas. (Photo by Justin Sullivan/Getty Images)

The Trump economy has been strong. Under the current president, the U.S. has seen its GDP skyrocket above three percent in back to back years, a number it never hit during the eight years of Obama’s presidency. Additionally, unemployment has hit record lows, and jobs are being added at a frantic pace. Just last month, 224,000 jobs were added to the economy, surpassing market expectations.

With Students for Trump, Kirk and Fournier are making a bet that young people will prioritize the promise of opportunity over the promise of a government handout. That, and the increasing confidence of the conservative movement on campuses throughout the country.

“More students that hold our viewpoints have the confidence of their conviction now,” Kirk said. “Students on the right have more backbone than they’ve had before, and I give the president a lot of credit for this.”

That’s the bet Kirk made roughly seven years ago when he started Turning Point USA, and that’s the bet he’s making with Students for Trump.

If it works, it could be a game changer for the conservative movement.