Facebook updated its community standards recently to include prohibiting threats that can lead to violence against anyone except for groups and people who media reports describe as dangerous.

The social media platform’s new policy warns users not to post “threats that could lead to death” of any targets where a threat is considered an intent to commit violence against a person. Facebook puts in parenthesis an odd exception: such threats are permitted against people or groups who have been established by media reports as dangerous.

Such threats are prohibited, the update notes, “(unless the target is an organization or individual covered in the Dangerous Individuals and Organizations policy, or is described as having carried out violent crimes or sexual offenses, wherein criminal/predator status has been established by media reports, market knowledge of news event, etc.).” 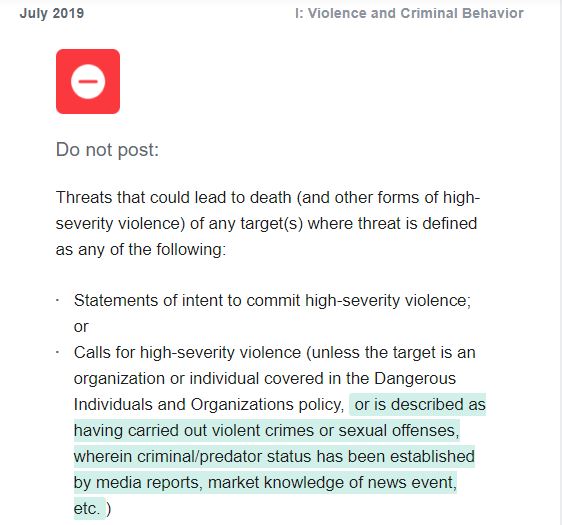 Facebook labels terrorist organizations and terrorists under its “Dangerous Individuals and Organizations” policy. The company removed Nation of Islam leader Louis Farrakhan, and conservative pundits Alex Jones and Laura Loomer in May for violating policies against dangerous individuals and organizations.

The change generated a flurry of speculation on Twitter. “Facebook actually allows you to break the law and incite violence against their chosen targets,” freelance writer Tim Pool said in a tweet Tuesday. He added: “Civil War when?” (RELATED: Zuckerberg Announces Big Changes To Facebook. Here’s What People Should Expect)

Facebook actually allows you to break the law and incite violence against their chosen targets.

Gamer Mark Kerr mirrored Pool’s comment in a tweet Tuesday, noting the odd parenthetical reference. He suggested the change would likely permit “violence and death threats against Nazis” so long as the media are the ones defining Nazi.

Facebook says the change in policy allows for generalized threats of violence, such as permitting users to suggest that a killer or terrorist should be subject to capital punishment.

“We don’t allow credible threats of violence against anyone,” company spokeswoman Ruchika Budhraja told the Daily Caller News Foundation. “We do allow some speech that calls for certain forms of violence, such as calls for the death penalty for criminals or support for military action against terrorists.”

Critics have scrutinized the company recently for supposedly discriminating against conservatives.

The Trump administration has scheduled a July 11 social media summit event, which aims to talk about the country’s online environment. Many of those who are invited believe Facebook, Google and other big tech companies should be broken up or more aggressively regulated.

Facebook is currently conducting an audit to determine to what degree, if any, it is biased against conservative voices.

A company spokesman told the DCNF on July 5 that Republican Sen. Jon Kyl of Arizona has talked to more than 130 of the country’s top conservative groups to determine how Facebook’s policies are affecting them. His audit was slowed after he was appointed to serve out the remainder of former Arizona Republican Sen. John McCain’s term.