Home Depot co-founder Bernie Marcus responded to boycotts of his stores in a Facebook post Thursday, saying “it angers” him to be treated so viciously simply for expressing support for the president.

“I woke up this morning thinking it was going to be another great day,” he wrote. “I’ve been celebrating with friends, family and the community since I turned 90 … All that happiness blew up because I said in a newspaper interview that I have supported and will continue to support Donald Trump.” 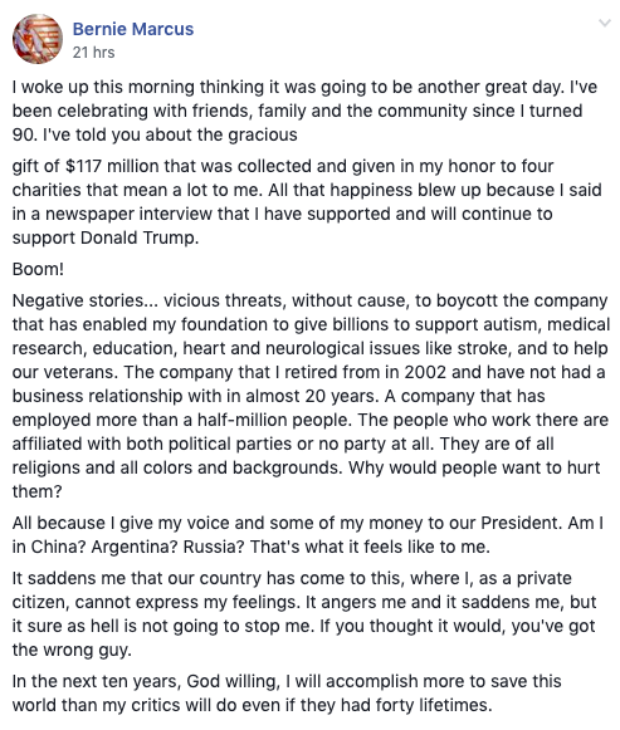 “Boom!” he continued. “Negative stories… vicious threats, without cause, to boycott the company that has enabled my foundation to give billions to support autism, medical research, education, heart and neurological issues like stroke, and to help our veterans. … The people who work there are affiliated with both political parties or no party at all … Why would people want to hurt them?” (RELATED: ‘He Is The Enemy Of Every Entrepreneur’ — Home Depot Founders Blast Socialism, Issue Dire Warning For Bernie Supporters)

He added: “Am I in China? Argentina? Russia? That’s what it feels like to me.”

Liberals and anti-Trumpers began harassing Marcus and boycotting Home Depot after he told the Atlanta Journal-Constitution he supports Trump, and the paper reported he was a top donor to the Trump campaign. The focus of the story was on his philanthropy — the billionaire plans to give 80 to 90 percent of his wealth to charity after he dies.

He concluded the post by saying it “saddens” and “angers” him that he and employees of Home Depot would be treated this way simply because he expressed his feelings about the president, but that it won’t stop him from doing more for the world in the remainder of his life than all of his critics combined.

“It saddens me that our country has come to this, where I, as a private citizen, cannot express my feelings,” he wrote. “It angers me and it saddens me, but it sure as hell is not going to stop me. If you thought it would, you’ve got the wrong guy. In the next ten years, God willing, I will accomplish more to save this world than my critics will do even if they had forty lifetimes.”