Roberto Escobar, brother and former accountant of the infamous drug lord, is selling his own version of a useable torch, according to a post on his website. Now he’s giving Musk an ultimatum: pay him $100 million for the idea or prepare for a lawsuit. 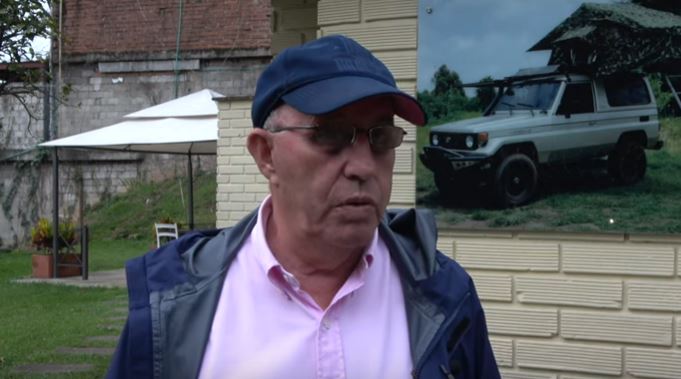 A YouTube screencap is pictured of Roberto Escobar talking about his brother. (YouTube/Escobar Jr)

The Tesla and SpaceX CEO made a deal with Roberto Escobar to launch the device under the Tesla umbrella, Roberto Escobar told reporters Thursday — in exchange, Musk was required to pay him 20% of the profits. “Then he changed the name to ‘Not a Flamethrower’ to avoid any type of deal we had,” Roberto Escobar said to Digital Trends.

Musk introduced the $500 flamethrower, which is effectively a glorified torch that can shoot a flame of no more than 5 feet, in 2018 after hinting at the product since 2017. The billionaire tech guru said he changed the name to “Not a Flamethrower” because customs agencies would prohibit him from shipping anything labeled “flamethrower.”

Tesla engineers visited Roberto Escobar in mid-2017 and discussed a toy flamethrower that could be used to “burn money,” he said. Nothing came of the meeting until Musk launched “Not a Flamethrower” through The Boring Company, according to Roberto Escobar.

He now wants Musk to pay up. “That 20% is now worth about $2 million,” Roberto Escobar said. “However, due to his slander and due to his non-payment, we are requesting $100 million.” (RELATED: Elon Musk’s Flamethrower Sucks. Objectively, It Sucks)

“I do not mind [becoming] the new CEO of Tesla if we win a judgment in the courts,” Roberto Escobar added. “I am sure that I could run Tesla into profits.” Musk made roughly 20,000 flamethrowers, meaning he made about $10 million on the device, which is substantially less than what Roberto Escobar wants.

Tesla did not respond to the Daily Caller News Foundation’s request for comment, but Musk addressed the situation in a tweet. “It’s Not a Flamethrower, Mr Escobar,” Musk told his Twitter followers Thursday.