Facebook recently changed its algorithms to steer focus away from explicitly political content, but now that alteration is laying waste to conservative and liberal outlets.

Conservative pundit Deneen Borelli laid into Facebook last week, telling her followers on July 9 that the company’s bias against conservatives cost her a job. In fact, she is holding CEO Mark Zuckerberg chiefly responsible after BlazeTV cancelled her Facebook show, “Here’s the Deal.”

“And Mark, I hold you responsible for the high-tech lynching of my job,” Borelli, a black conservative who gained a large following during her run, said in her final video on July 9, which received more than 374,000 views as of the posting of this article. Reports appear to show that Facebook’s algorithm shift is suppressing content across all platforms.

A BlazeTV representative confirmed to the Daily Caller News Foundation that her show was cancelled due to a lack of viewership. (RELATED: Conservatives Say Facebook Is Suppressing Much Of Their Content. Here’s What Experts Say)

“My videos were not clickbait. I didn’t engage in over-the-top antics to get attention. I wasn’t shrill, and my videos were not challenged by a fact-check organization,” Borelli added. She told the DCNF she started seeing her content crater after she spoke at the Conservative Political Action Conference (CPAC) in late-February.

“It is obvious Facebook is a liberal platform and my first thought was that it was the company that was trying to silence my speech,” Borelli told the DCNF, echoing a common criticism conservatives level against big tech companies. “One thing that has to be noted is that I am a prominent, female, black conservative.”

“A good video in the old days would get 30,000 views in an hour. Now we are getting that in a day,” said Tom Borelli, a contributor at the Conservative Review, which merged with Blaze in 2018. “Something is going on with Facebook. We have not seen the kind of dropoffs like we have with Facebook on Twitter, so there is something specific about Facebook.” 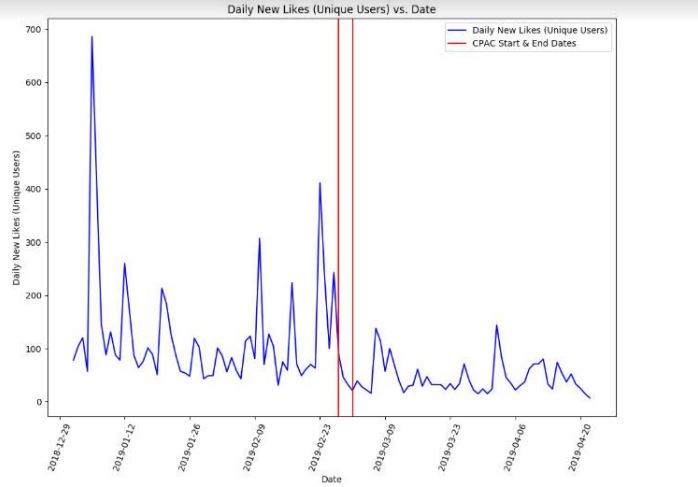 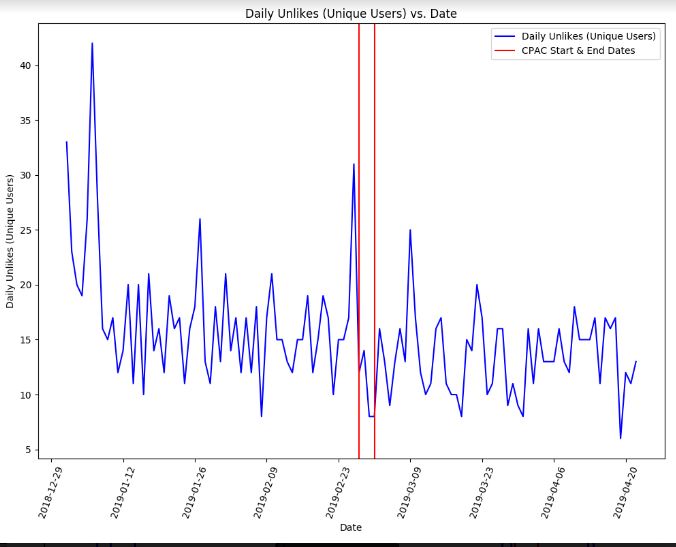 Deneen Borelli’s engagements plummeted between Dec. 29, 2018 and April 20, 2019, according to data scientist Emily Williams, who conducted a detailed analysis of “Here’s the Deal’s” content on behalf of the DCNF. Her measurements showed a marked decrease in circulation during Deneen Borelli’s Feb. 28 appearance at CPAC.

Williams’ linear regression analysis examined Deneen Borelli’s total “likes” as a function of the variables “time” and “pre or during/post CPAC.” To investigate the possibility of difference between the two sections’ slopes — before and after CPAC — she also included an interaction term between “time” and “pre or during/post CPAC.” The BlazeTV provided data on Deneen Borelli’s show, which Williams then analyzed.

“A statistically significant change occurred in the rate of increase in total lifetime likes starting about the time of CPAC,” said Williams, who founded research group Whole-Systems-Enterprises.  “This analysis supports the ‘eyeball’ analysis that indicated a problem in the first place, but puts some statistical heft behind the conclusion.” 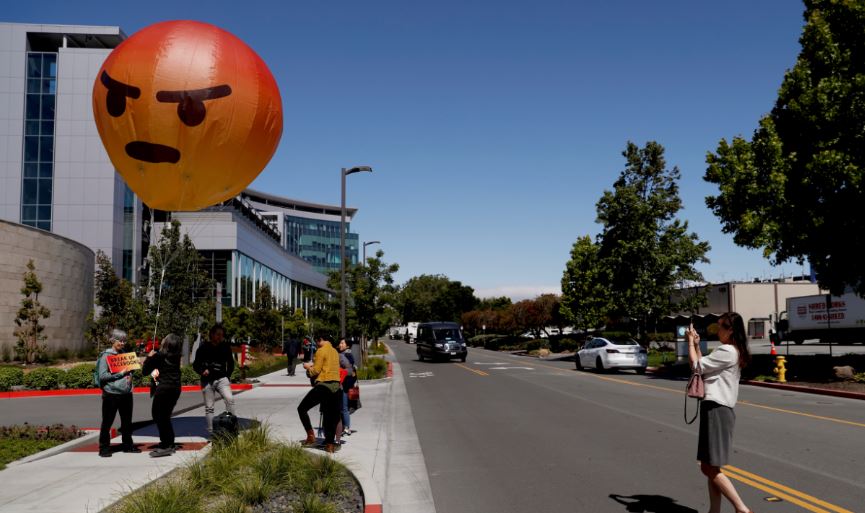 A passerby takes a photograph of an inflatable angry emoji during a protest outside the Facebook 2019 Annual Shareholder Meeting in Menlo Park, California, U.S., May 30, 2019. REUTERS/Stephen Lam

“It’s scary that these voices are being silenced, because of an algorithm change. I wonder what would have happened to the Federalist Papers today if that was contingent on Twitter,” Williams said, referring to what she said are people’s growing dependence on Facebook and Google’s business models for their careers.

When Facebook, Google or Twitter switches off the algorithm, it creates a type of butterfly effect on downstream content, particularly for people who don’t have a megaphone, she added. Fox News, NBC and other major media outlets can take the hit when Facebook makes major changes, but smaller entities are disproportionately affected.

Facebook updated its News Feed ranking algorithm in May to incorporate data from surveys about who people say are their closest friends. The company announced at the time that it’s training new classifiers based on patterns linking these surveys with usage data, effectively redirecting traffic toward close-knit groups and away from clickbait.

Facebook has not responded to the DCNF’s repeated requests for comments, but the company frequently tells reporters that it does not discriminate against conservatives or construct its system in ways to suppress conservative content.

The changes have been profound, not only for people like Deneen Borelli but also for liberal outlets, like NowThis News. (RELATED: Zuckerberg Announces Big Changes To Facebook. Here’s What People Should Expect)

NowThis News, known for publishing left-leaning content, has seen its combined monthly video views across Facebook and other platforms drop 50%, tumbling from 1.5 billion video views in 2018 to 729 million views in May 2019, according to a report from digital marketing group Digiday. Facebook contributed more than 550 million of the 729 million views NowThis accumulated in May, reports show.

Those numbers are down from June 2018, when Facebook accounted for 1.3 billion views. NowThis has been able to stay afloat, thanks in part to the video publisher’s monthly YouTube views, which went from 7.6 million in June 2018 to 20.5 million in May 2019 and from 73.4 million views to 97.2 million views on Twitter over the same period, per Tubular data.

All of these changes are coming as the company seeks to make more systemic changes to how it governs allowable content. Facebook banned white nationalist content and separatism from its platform. The social media giant already prohibited white supremacy but left a type of loophole that civil rights groups argued promulgated hate and racism.