Here’s A List Of Some Of The Most Unusual Animals, Reptiles Available At A Typical Wuhan Wet Market
Shotgun Life Contributor
July 15, 2019 5:10 PM ET
Font Size:

Looking back to April 2019,there were 26,678 student clays-shooting competitors from 1,042 high school teams across 25 states who participated in the USA High School Clay Target League.

That program isn’t the only game in town for youngsters looking to become the next George Digweed, Kim Rhode, Bill McGuire or Anthony Matarese, Jr.

There’s the Scholastic Clay Target Program (SCTP), which offers kids from elementary grades through high school and college the opportunity to participate in all the major clays sports.

The Scholastic Shooting Sports Foundation introduces school-age youth to the shooting sports. To a large extent the SSSF has become a de facto feeder program to USA Shooting and the U.S. Olympic Shooting Team.

And let’s not overlook the National 4-H Shooting Sports and Boy Scouts of America as pioneers that initiated kids into shotgunning sportsmanship and safety.

It seems that everyone credits women with the biggest percentage revenue gains in the shotgun sports. However, a comparative perspective might show that youth shotguns and related purchases might be just as lucrative – or even greater. 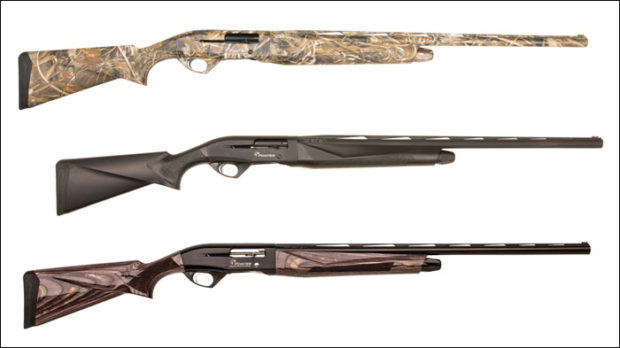 Some of the Pointer Phenoma semi-automatic shotguns that are available in youth models.

The NSSF survey indicated that SCTP participants had spent more than $8 million dollars in 2016. Better yet, 93 percent of SCTP parents surveyed said that the program had had a positive influence on their children.

From 2014 to 2016, the publicly available National Rifle Association Foundation’s tax returns showed that the organization allocated more than $4 million in cash and equipment grants to schools and groups that support scholastic shooting sports.

America’s boom in youth shooting programs hasn’t been lost on Andy McCormick, Executive Vice President of Marketing and Sales at Legacy Sports International in Reno, Nevada. Through their Pointer line of over/under and semi-automatic shotguns made by Zafer Arms Company of Izmir, Turkey, Legacy Sports International has quietly become possibly the largest provider of kid-friendly shotguns.

“We’ve always focused on the youth market and we’ve done well in that department because it’s something we believe in,” Andy explained. “There’s a way of looking at it as a future market for customers, but it’s also the future of the industry. It’s the stewardship of trying to make it easy to get people out in the field with a quality product.”

Legacy Sports International imports and distributes firearms and shooting accessories in the U.S. In addition to the Pointer shotguns, their brands include Citadel pistols and tactical shotguns, Howa Precision Rifles, Lithgow Rifles and Nikko Stirling optics.

Of the 54 Pointer models sold by Legacy Sports International, 12 of their over/unders and semi-automatic shotguns are specifically designated for youth. These models are characterized by a shorter barrel, shorter stock and sub-gauge ammunition. The packaging reduces felt recoil and helps improve results through better fit and softer ballistics.

For example, the Pointer Arista over/under is available in all popular gauges with 28-inch barrels. The youth model has 26-inch barrels and only comes in 20 gauge and .410.

“Last year we sold a surprising number of 20-gauge over/under youth models – as many as our standard models,” Andy said. “Dealers are really stocking them. We try to keep production ramped up especially during the summer into fall, and the holidays.”

The thing about Andy is that he’s an avid hunter who fully understands the importance of getting youngsters outdoors.

Legacy Sports International just signed on as an SCTP Gold Sponsor in response to the interest in the Pointer line by youth shooting coaches at the 2019 industry SHOT Show held in Las Vegas January 21-25.

“We had a lot of the coaches stop by looking for 12-gauge youth models,” Andy said. “We have entry-level Pointers that cost under $1,000 with adjustable combs, ejectors, ported, five extended chokes, mechanical triggers and high ribs. We’re working on getting sample guns out to them in the next few weeks.”

Sporting shotguns priced at the wallet-friendly $500 to $1,000 are a critical factor in enabling families to get their kids enrolled in scholastic clay target programs.

When it comes to getting kids involved in the shotgun sports, few people understand the calculus of affordability and participation better than Tom Wondrash, National Director of the SCTP.

At the 2019 SHOT Show, Andy explained that he learned from SCTP coaches one of the appeals of clays shooting to kids and parents is that, unlike school team sports where parents invest a lot of money in gear only to find their kids sitting out the season on the bench, everyone on a youth shotgun squad gets to participate.

“Everyone is engaged and in the game,” Andy said.

Regardless, when it comes to introducing kids to the shotgun sports, spreading urbanization, higher hunting costs, habitat loss and draconian regulations can dampen parents’ enthusiasm for getting their kids engaged. Even when it comes to clays shooting, youngsters today are suffering from the decades-long, downward spiral in hunting.

The Pointer SCT Deluxe Clay over/under has a model designed to fit youngsters.

In 1970, more than 40 million Americans bought hunting licenses. By 2016, America’s hunting population fell to 11.5 million. Today, fewer parents can simply reach into the safe for a family shotgun that will get junior out on the skeet field.

“We’re getting more and more athletes and their and families involved in our program that have not been involved in the shooting sports and they don’t own a shotgun,” Tom said. “They’re not from hunting backgrounds.”

And here’s where Legacy Sports International is filling the breach.

Of their 12 youth shotguns, the Pointer SCT Basic clays gun features an adjustable comb on an oil-finished walnut stock, five extended chokes, ported, ejectors, raised rib and fiber-optic front sight for $989. The standard models come with 30-inch barrels but the youth version has 28-inch barrels. The Pointer SCT and SCT Deluxe are the only 12-gauge shotguns they sell as youth models.

The Pointer Arista over/under youth field gun is available with 26-inch barrels in 20 gauge and .410 with engraved nickel action and walnut stock and forend. It sells for $589.00.

Although the Pointer Phenoma semi-automatic line features several different models in 12, 20, 28 gauge and .410, the youth models are 20 gauges with prices that start at $539.00.

And the prices get better for SCTP parents. Legacy Sports International is cooperating with SCTP for pricing incentives that will get more kids into clays shooting.

“What we’ve put together with Legacy is buying program if you will,” said Tom. “The teams or families can purchase these guns at a reduced price. It gets more people involved and families involved who all stay involved longer. I think the relationship will help fill the niche of purchasing a firearm that won’t break the bank because the youth are the future of our sport.”

1
Intel Official Dumps Bombshell On ABC About November Coronavirus Warnings
Media
2
EXCLUSIVE: 'Americans Don't Want To Lose Their Country' — Glenn Beck Tells His Coronavirus Critics Exactly What He Thinks Of Them
Editorial
3
Kamala Harris On Trump Touting Hydroxychloroquine: ‘We Don’t Want A Drug Pusher For President’
Politics
4
EPSTEIN: It's Time For Some Clear Thinking About The Virus
Opinion
5
Greg Gutfeld And Juan Williams Find A Rare Point Of Agreement
Media