With chronic stress affecting more than 100 million Americans, WalletHub released an in-depth study Monday, outlining the 180 most and least stressed cities in the nation across 39 metrics.

The investigation follows the statistic that workplace-related stress alone costs society more than $300 billion per year, according to the American Institute of Stress.

Not surprisingly, money topped the list as the number one stress-factor in the nation.

In the twenty-first century, Americans are working longer and harder than ever, an average of 47 hours per week due to the demands of the modern workplace. U.S. workers clock in more hours on the job than any other industrial country, according to The American Institute of Stress. 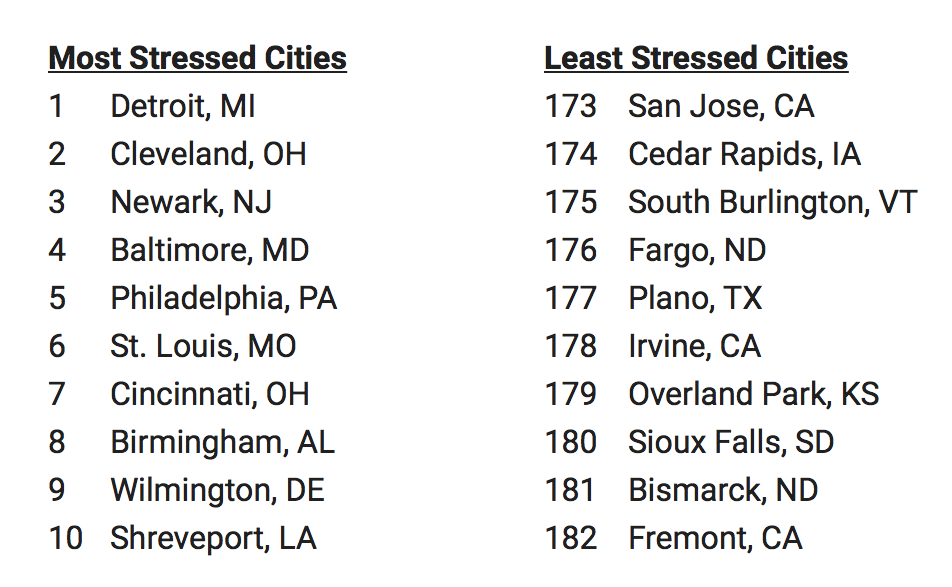 Detroit, Michigan, ranked as the most stressed city in America. It has the highest poverty and unemployment rates, the second highest divorce rate and the lowest average hours of sleep per night. Detroit’s total score is a whopping 62.72 out of 100, according to the study.

South Burlington, Vermont, has the lowest unemployment rate, 1.70%, 5.3 times lower than in Detroit, where 9% of the population is unemployed. (RELATED: Americans Are Literally Bursting At The Belt. Here’s A List Of Our Fattest Cities).

Burlington and South Burlington, Vermont, have the lowest share of adults in fair or poor health at 9.90%.

WalletHub interviewed experts on how employees can combat the inevitable stress in a working environment.

“First, they need to recognize and understand the types of stress inherent in the work being performed, as well as how to help employees recover from exposure to those types of stress,” Julie Ann Leifeld, the clinic director at Southern Connecticut State University, said.

“Second, management needs to develop a workplace culture in which holistic well-being is considered a strategy, not a privilege,”