Last Friday, the Turkish Ministry of Defense announced that it received its first shipment of the Russia’s S-400 missile defense system. The United States has long opposed Turkey acquiring the S-400 out of concerns that the move could allow Moscow gain technical information about the F-35, an advanced U.S. fighter jet which Turkey helps build.

However, despite Washington’s threats of sanctions and expulsion from the F-35 program, Ankara has gone through with the deal.

Over the past several years, Turkey has stood out among American NATO allies for its friendly relations with Russia. In addition to purchasing the S-400 missile system, Ankara has conducted joint military exercises with Moscow and expressed interest in buying other Russian weaponry. While many other NATO countries joined the United States in cutting their economic ties to Russia after its 2014 annexation of Crimea, Turkey expanded them. (RELATED: Russia Gives Missiles To Turkey Despite Months Of US Attempts To Stop The Move)

Even on Syria, where the two countries back different sides, Russia and Turkey are increasingly working together – in large part because of their common opposition to U.S. actions in the country.

Moscow and Ankara were not always on such good terms. In 2015, relations deteriorated between the two nations after Turkey shot down a Russian fighter jet. The Kremlin responded by instituting a broad range of sanctions against Turkey and bombing Syrian rebels supported by Ankara. Moscow’s sanctions delivered a serious blow to the Turkish economy, which receives a big boost from Russian tourists and exports many goods to Russia.

It was not long until Turkish President Recep Erdogan began offering conciliatory overtures to Moscow. Just months after the fighter jet incident, Erdogan sent a letter to Russian President Vladimir Putin expressing regret over the situation and calling for a normalization of relations. Not long afterwards, the two Turkish pilots who shot down the Russian plane were arrested for alleged ties to Fethullah Gülen, a U.S. based cleric who is Erdogan’s political nemesis.

Turkey’s growing dissatisfaction with the United States also helped motivate its pivot to Russia. Erdogan has accused Washington of “writing the script” for a failed July 2016 military coup against him. At the same time, Ankara opposes U.S. support for Kurdish forces in Syria, fearing that their success could empower Kurdish separatists within Turkey.

In this context, Turkey has opted to join a Kremlin-led effort to broker peace in Syria. Beginning in 2017, Russia, Turkey, and Iran have held talks between the Syrian government and opposition in Astana, Kazakhstan.

Washington has opposed the Russian-Turkish-Iranian diplomatic effort in Astana, accusing it of masking “the Assad regime’s refusal to engage in the political process.”

Turkey has also pursued tighter military cooperation with Russia. Ankara signed an agreement purchasing S-400 systems from Moscow in late 2017 for $2.5 billion. After nearly two years and much pushback from Washington, that deal was finally implemented last Friday.

Both countries appear interested in further weapon sales. Even before Russia delivered Turkey’s first batch of S-400s, Erdogan was already publicly declaring interest in helping Russia build its next generation S-500 missile system. Furthermore, Moscow has offered to supply Ankara with Su-57 fighter jets if Washington follows through on its threat of denying Turkey its F-35 jets.

Aside from arms trade, two countries have begun engaging in joint military exercises. In March, Russia and Turkey conducted a joint naval drill in the Black Sea, an region of tension between Moscow and NATO. It was their second exercise in the area since 2017. (RELATED: The Notre Dame Of Cyprus, St. Nicholas Cathedral, Is A Mosque Under Turkish Occupation Now)

Turkey also appears eager to strengthen its economic ties with Russia – a position that puts it at odd with many other fellow NATO members. When Erdogan met with Putin in Moscow in April, the Turkish president boasted that trade between the two countries had reached $26 million in 2018, a 15 percent increase from the year before. The two leaders pledged that they would work to boost trade to $100 billion over the coming years.

During that same meeting, Putin and Erdogan also signed an agreement about the establishment of a Russia-Turkey joint investment fund with a budget of 900 million euros, or about $1 billion.

Energy is the cornerstone of the two countries’ economic cooperation. Russia is Turkey’s leading supplier of natural gas and Ankara is the second biggest client of Gazprom, the Russian natural gas giant.

Turkish reliance on Russian gas is only likely to grow in the coming years. Gazprom is expected to finish construction of TurkStream, a gas pipeline that will transport up to 31.5 billion cubic meters of Russian gas to Turkey and Southern Europe each year, by the end of 2019. 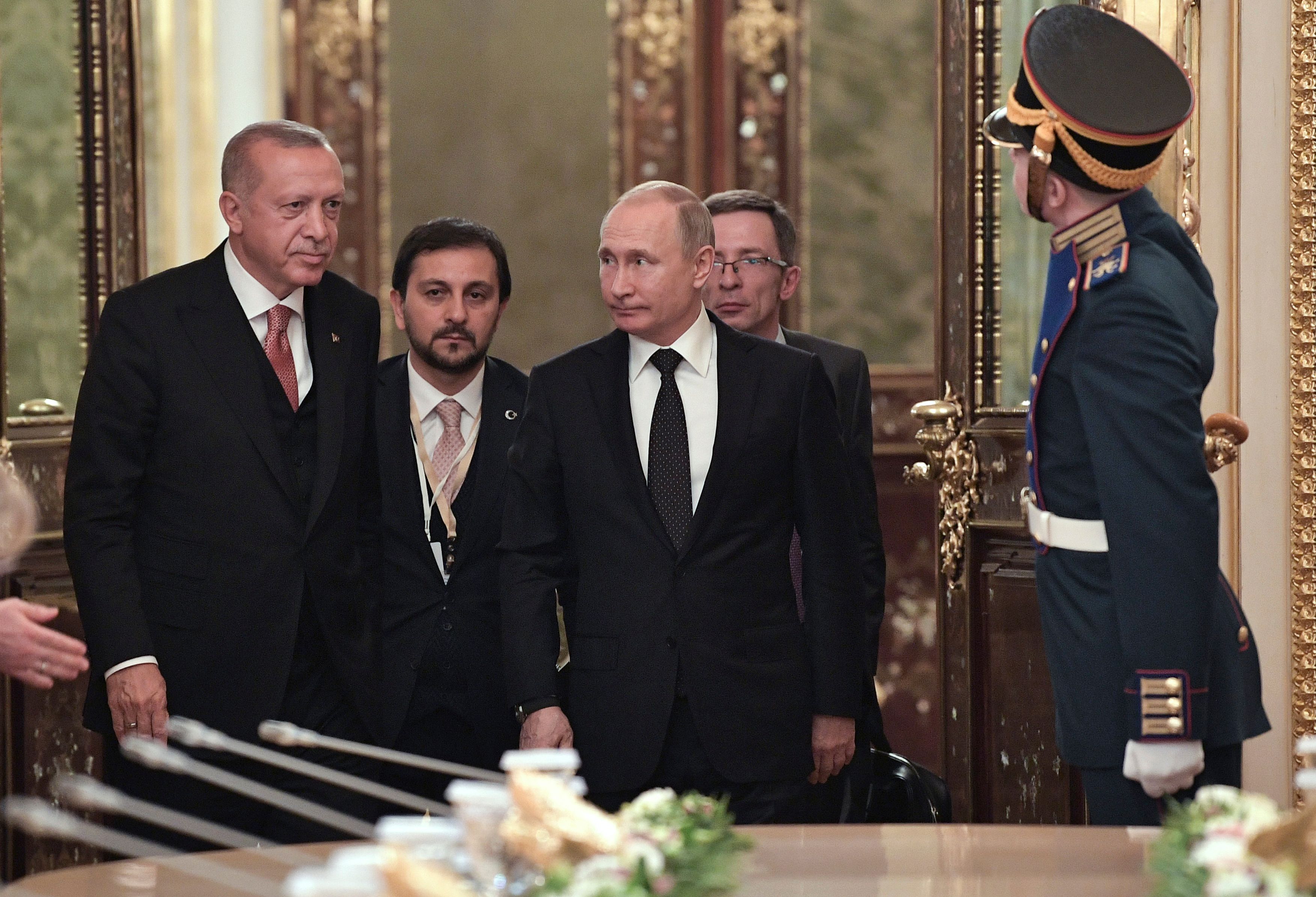 The pipeline is part of the Kremlin’s effort to increase its gas flow to Europe while bypassing Ukraine, which has traditionally been the main conduit for Russian gas to the West.

Beyond gas, Ankara has awarded Moscow lucrative contracts in other areas as well. Last April, Russia began construction of Turkey’s first nuclear power plant. The project is valued by the Turkish government at $20 billion.

As Turkey’s economic and military ties with Russia deepen, Ankara is increasingly reluctant to side with its NATO allies against Moscow. Following the attempted poisoning of ex-Russian military officer Sergei Skripal, the United States and many of its NATO allies responded by expelling Russian diplomats from their countries. Turkey notably refused to join the effort.

“Just because some countries took steps based on a claim, we are not in a position to take a similar step,” Erdogan stated at the time.

With the arrival of Russian S-400s to Turkey, Ankara is now even more far apart from the Western camp. Despite Washington’s threats, one of NATO’s earliest members has opted to follow through with purchasing a missile defense system from one of the alliance’s rivals. With its economic and military ties with Moscow on the upswing, Turkey is increasingly drawing closer to Russia. Even the two countries’ differences have not proven enough to derail their burgeoning partnership.

For many observers in Washington, the main question left is how far Turkey will pivot to Russia.