House Democrats expressed frustration with “the Squad” after voting Wednesday to defend them from President Trump, saying they played right into Trump’s hands and don’t deserve that kind of support from House leaders they’ve criticized.

“Many are extremely frustrated,” CNN’s Jake Tapper reported in a Twitter thread Wednesday, based on conversations he had with Democrats on the Hill. They’re not as unified as their votes this week indicate, he said.

One House Democrat told Tapper the showdown between the White House and “the Squad” served Trump’s interests. “The president won this one,” the unnamed Democrat said. “What the president has done is politically brilliant. Pelosi was trying to marginalize these folks and the president has now identified the entire party with them.” (RELATED: 11 Highlights From Democrats’ Insult Fest Between Team Pelosi And Team Ocasio-Cortez)

House Democrats appeared unified in their votes this week but I’ve spent the day talking to a bunch of them and many are extremely frustrated. All agree POTUS’s tweets needed to be condemned; they spoke under condition of anonymity so they could be candid. (Thread)

Another House Democrat told Tapper the whole thing is distracting Democrats from the “bread and butter” issues they need to focus on to win in 2020. “We need to focus on the issues that got them here: jobs, health care … instead of the issues the president brings up deliberately,” the representative said. “Anything that takes away from bread and butter issues is playing into his hands.” (RELATED: GOP Launches New Campaign Ad Against ‘The Squad’) 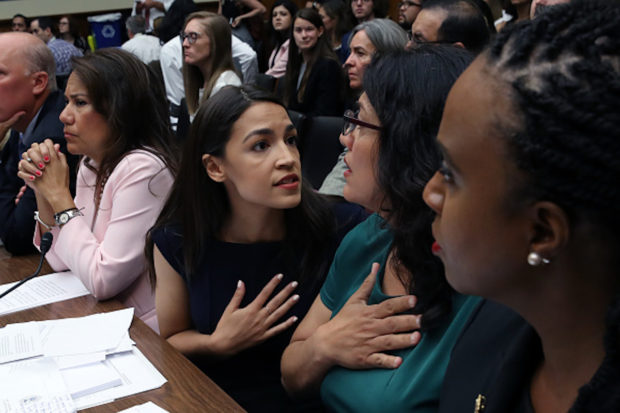 Other Democrats complained about having to defend Omar and Tlaib in particular, given Omar’s anti-Semitic comments, and Omar and Tlaib’s bill in support of an anti-Israel boycott, divest, and sanction movement that most House Democrats oppose. The House didn’t vote to condemn Omar’s remarks, a third Democrat told Tapper, but everyone “leapt to their defense” in the case of Trump’s remarks.

“We’ll hear a tirade of attacks on Israel from the same group,” that same Democrat told Tapper, referring Omar and Tlaib. “Hopefully they won’t be anti-Semitic.” A fourth added the bill is coming “from someone with a history of anti-Semitism.”

The third Democrat said it’s particularly frustrating given “the Squad’s” attacks on other Democrats, citing criticism over their support for border funding, and Ocasio-Cortez going after them on social media and allowing her chief of staff to help primary them. “It makes people’s skin crawl,” the representative said, adding: “I can’t tell you the number of Members who are angry and annoyed about them criticizing us.”

The fourth concluded, “We were there for them; they should stop attacking us.”