Two vertically challenged men have made waves this week for drastically different reasons.

Their visual similarities cannot be denied.

Chris Morgan — a 5″ or 4’11” fiery ball of a little man — quickly acquired the nickname “Bagel Guy” and went viral after he had a tantrum in a Long Island Bagel Boss. He freaked over perceived laughter from women he claimed cover their mouths to laugh at his height challenges. He told the New York Post that he believed that women behind the counter in the deli were “giggling” at him. More likely, these were pent up complaints for women he said had dogged him on dating sites. (RELATED: Short Bagel Guy Claims He Isn’t Racist)

“Everywhere I go I get the same fucking smirk with the biting lip,” he shouted, before a really tall man tackled him to the ground. (RELATED: Short Man In Bagel Store Loses Temper)

Morgan says women on dating sites have told him that he should be “dead” for being so short.

“You think I’m making that shit up?” he asked. 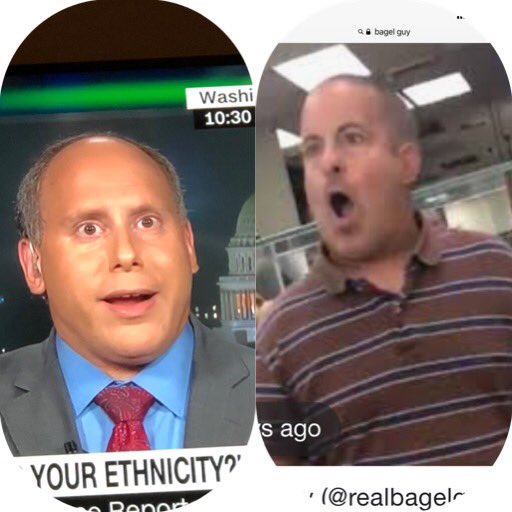 The Breakfast Media reporter was all over CNN Tuesday after President Trump’s Counselor Kellyanne Conway pointedly asked him that morning at a gaggle outside the White House, “What is your ethnicity?”

Feinberg had politely asked Conway about what many are deeming Trump’s “racist” tweets to the House “Squad” over the weekend and beyond when he said four female members of Congress should go back to their countries of origin. Trump denied that his tweets were racist.

“To what countries was the president referring?” Feinberg asked Trump’s top aide before she asked her question and then unloaded on him.

The reporter asked, “Why is that relevant?”

Conway acted like her question was a no brainer. “My ancestors are from Ireland and Italy,” she said, trying to show Feinberg how it’s done.

Feinberg told CNN that he did not believe Conway’s question was “anti-Semitic.” He did, however, tell CNN’s Don Lemon late Tuesday night that he believed her question was “inappropriate.”

Morgan and Feinberg are both short and balding with large wandering eyes.

Mercifully for Feinberg, their temperaments do not equate.