While most of the focus during the 2020 election cycle will be on the presidential election, the battle for control of the U.S. Senate will be of equal and perhaps even greater importance.

Without a majority in the Senate, it’s unlikely that President Donald Trump or a future Democratic president will be able to accomplish much (or even any) of his or her agenda. Perhaps most importantly, the future of the judiciary could very well be at stake in the next election. So far, Trump has been able to successfully appoint 127 federal judges, including 2 Supreme Court justices, but the conservative dream to remake the courts desperately needs a Republican controlled Senate to make that dream a reality.

The same sentiment rings true on the Democratic side, with Justices Ruth Bader Ginsburg and Stephen Breyer both in their 80’s, and likely to retire under the next Democratic president. Under a Republican Senate, Ginsburg and Breyer’s seats may both be left vacant, leaving the high court devoid of liberal leadership. The stakes could not be higher, and while November 2020 is still a ways away, we already have a good idea which states will determine the balance of power in the upper chamber. (RELATED: Hollywood Elites Send ‘Get Well Soon’ Card To RBG)

Republicans currently hold a 53-47 majority, and enter this election cycle as prohibitive favorites to maintain its majority after 2020. However, Democrats also have a path to take control of the chamber, even if it is a much narrower one.

One of the most conservative states in America shocked the nation in 2017 when it elected a Democrat to one of its two senate seats for the first time since 1992. In a special election to replace long-time conservative Senator Jeff Sessions, who had left the post to become Trump’s attorney general, Jones narrowly defeated Judge Roy Moore, who was facing several accusations of sexual misconduct. 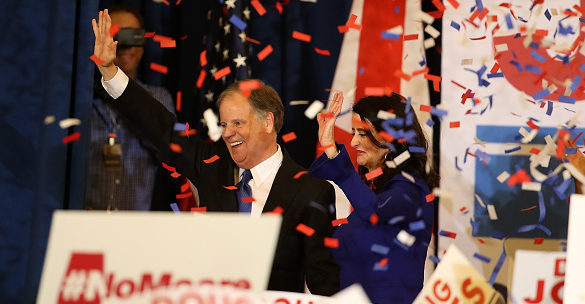 After a shocking defeat two years ago, Republicans are determined to win back the seat in a state Trump won by 30 points in 2016. With the president at the top of the ticket, Alabama represents by far Republicans’ best chance to flip a seat from blue to red, and it should be a layup unless Republicans nominate Moore again. With Trump likely to carry the state by a large margin again and turnout up in a presidential election year, it’s hard to see how Jones wins a full term, barring a major Republican calamity.

“Doug Jones has consistently voted against the interests of his constituents and the values of his state,” one Republican strategist told the Daily Caller, mentioning that Jones’ vote against confirming Justice Brett Kavanaugh could be viewed as unforgivable by voters in a deep-red state.

The race represents an uphill battle for Gardner, but not an impossible one. Gardner’s fortunes received a boost when popular former Democratic Gov. John Hickenlooper opted for a doomed presidential run over what would have likely been a surefire senate seat. Hickenlooper’s decision leaves Democrats without a clear front-runner to take on Gardner, but this still represents the most likely pick-up opportunity for Senate Democrats. (RELATED: Republican Sen. Cory Gardner Will Give Up On A Wall Vote With Democrats)

Gardner has a chance to win a second term, but will need to run a pristine campaign and get some luck in order to stay afloat in a state that continues to move left.

The hardest senate race to predict going into next year will be the one in Arizona. The outcome will likely hinge on Trump’s performance in a state that was once a Republican stronghold, but has recently become a crucial swing state.

Incumbent Republican Sen. Martha McSally was appointed to the seat formerly held by the late Republican Sen. John McCain after narrowly losing a slim race to Democratic Sen. Kyrsten Sinema for the state’s other senate seat in 2018. McSally will likely face former astronaut and U.S. Navy captain Mark Kelly in the general election.

With the advantage of incumbency in a red-leaning state, McSally will enter the race as a slight favorite, but Democrats believe they have a strong candidate in Kelly and see the race as one of the party’s best pickup opportunities. This race appears to be as close to a tossup as any going into next year.

The state of Michigan may be the most closely-watched state in 2020 with control of the White House and senate potentially on the line.

Republicans received a boost in the state last month when combat veteran and 2018 senate nominee John James announced another run after months of speculation. James performed surprisingly well in 2018, picking up 46% of the vote against long-time incumbent Democratic Sen. Debbie Stabenow. James has already raised over $1.5 million for the race, and Republicans have reason to believe James will be able to get over the hump against the state’s less established Democratic Sen. Gary Peters. (RELATED: Michigan GOP Senate Candidate John James Raises Over $1.5 Million In Three Weeks)

Peters is one of the most anonymous Senators in the country, with 43% of Michiganders not even knowing who he is. All these factors make Michigan Republicans’ best pick up opportunity outside of Alabama. A Republican strategist told the Daily Caller that the party views Peters as “very, very weak opponent,” and expect the race to be among the cycle’s most competitive.

Of course the outcome will largely depend on how Trump performs at the top of the ticket. In 2016, the president became the first Republican presidential nominee to carry the state since George H.W. Bush in 1988.

Republican Sen. Susan Collins has been a staple in Maine politics since winning her first election in 1996. Known as one of most moderate Republicans in Congress, Collins has been easily re-elected in a blue state several times over her long senate tenure. However, Collins decisive vote to confirm Justice Brett Kavanaugh drew the ire of the Left and has made her one of Democrats’ top targets this cycle.

Maine House Speaker Sara Gideon recently announced a bid to unseat Collins, and has emerged as the favorite to win the Democratic nomination. Gideon will be a formidable candidate, and will be well-funded as left-wing activists have already raised millions of dollars to defeat Collins after her vote to confirm Kavanaugh. (RELATED: Susan Collins Has No Regrets Over Her Vote For Brett Kavanaugh)

The race will likely hinge on how successful Democrats are at convincing Mainers that Collins has moved to the Right and lost her independent streak. For her part, Collins will likely attempt to distance herself from Trump during the campaign. Collins has not been shy about criticizing the Trump administration in the past, and has not committed to endorsing the president’s reelection bid.