U.S. Capitol Police (USCP) arrested the people who were protesting in Russell Senate Office Building Thursday, according to ABC News. The protesters were wearing photos of immigrant children who had died in U.S. custody, according to The Hill.

“The United States Capitol Police arrested 70 individuals for unlawfully demonstrating in the rotunda of the Russell Senate Office Building. All were charged with D.C. Code §22-1307, Crowding, Obstructing, or Incommoding,” USCP communication director Eva Malecki wrote in an email to ABC News.

The Franciscan Action Network, a Catholic human rights group that planned the protest, encouraged attendance to show the Trump administration that “our Catholic faith demands we treat our neighbor as we would want to be treated.”

The group planned to pray in Russell. “At this point, many will be risking arrest, since praying in the Rotunda is against the law,” the group noted on its website. (RELATED: ICE Released List Of Illegal Immigrants Accused Of Crimes After Local Police Ignored Detainers) 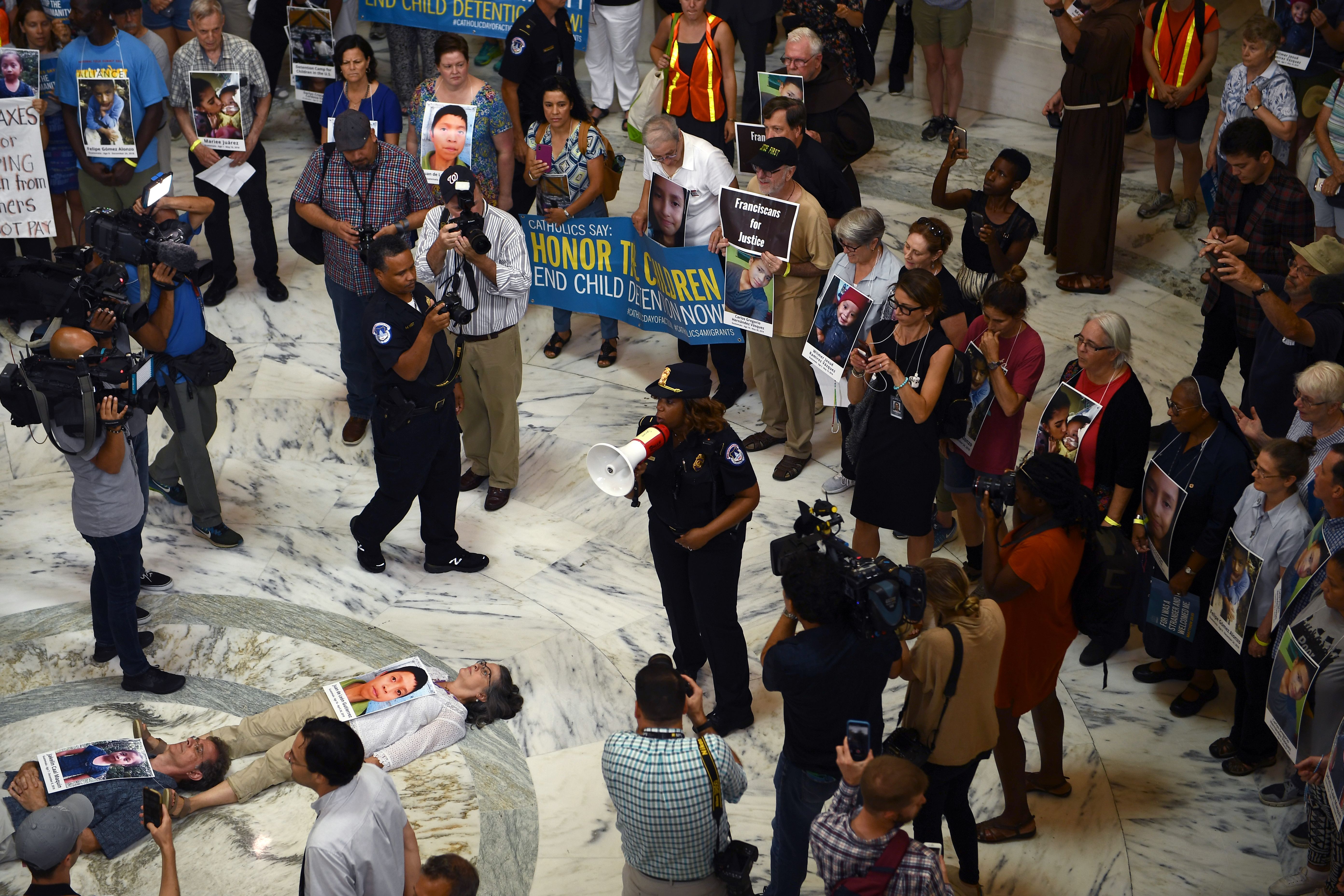 Members of the Franciscan Action Network hold a prayer vigil at the Russell Senate Office Building on Capitol Hill in Washington, D.C., on July 18, 2019. (Photo by Brendan Smialowski / AFP)

“We urge our members and friends who can not be with us in DC to pray with us in your home community, using the same prayer service we will be saying,” the group’s website says. “This act will bring us [together] in solidarity with one another and the children for which we pray.”

Sister Pat Murphy, 90, a member of the Sisters of Mercy from Chicago, told ABC News that she traveled to Washington, D.C., for the event and that she was among those arrested. She has been a sister for 71 years, the publication reported, and helped to start Interfaith Community for Detained Immigrants, an organization that visits jails and immigrant detention centers.

A #CatholicDayOfAction on Capitol Hill.

Mercy Sisters, faith advocates and people of goodwill are risking arrest by standing up for the dignity and rights of immigrants!#Catholics4Migrants https://t.co/uVbCkV33jX

“These are our brothers and sisters and they are part of the human family and how can we not? I mean, any person with any human compassion would reach out,” she told ABC News. “What is going on is, it’s just abominable. It’s a horrific situation that’s happening right now.”

Watch here as Sister Pat Murphy, 90, is arrested and led out. Sister Pat works with migrants and refugees in Chicago, and has been holding a weekly vigil outside ICE there for 13 years. She says the treatment of migrants should outrage all people of faith #CatholicDayOfAction #DC pic.twitter.com/z2cXTGcJFn