Handgun hunting is a challenging and intrinsically rewarding undertaking that’s supremely addictive; once you meet with success in the field, it’s forever ingrained in your psyche—you’re hooked.

With that said, for firearm manufacturers, it’s a marginal market at best. This financial reality is reinforced each year with the release of states’ big-game harvest summaries, whereby handgun hunters (if permitted, or included) are disproportionately represented among the participants and—obviously—animals taken, too. Inasmuch, it’s little surprise that many large-scale gunmakers want no part in a trivial, and assuredly non-lucrative, portion of the firearms marketplace. Fortunately, not all companies subscribe to this go-big-or-go-home-type mentality. Nosler illustrated such when it debuted its first handgun, the feature-filled Model 48 Nosler Custom Handgun (NCH).

The heart of the Model 48 NCH is found in Nosler’s strong, field-proven Model 48 action. Like those of its long-gun counterparts, the NCH’s blueprinted, hand-lapped receiver is drilled and tapped in the ubiquitous Remington Model 700 pattern, and the pivoting bolt-release button is located on the left side at the rear. As a single-shot, though, the traditional bottom cutout for a magazine has been closed with a fitted piece of steel welded in place. It’s top portion has been milled to ensure reliable cartridge feeding into the chamber.

Removing the bolt reveals the familiar two-lug bolt, M16-style extractor, and Remington-type plunger ejector. Flutes on the bolt body serve two purposes: they reduce friction, as well as provide a place for dirt, dust and debris to settle so as not to affect cycling of the bolt. The bolt handle has a band of checkering circumventing the top two-thirds of the knob, while the bottom portion is flat. 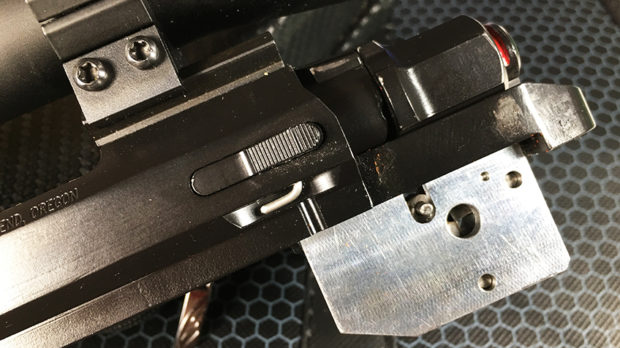 Not unlike bullpups, handguns with the action behind the trigger generally have terrible trigger characteristics, as there’s a transfer bar linking the trigger (shoe) and trigger housing. That’s not the case with the NCH; its two-stage trigger exhibited no creep or overtravel and broke at an average of 2 pounds, 10.6 ounces. It’s really quite an accomplishment. The cross-bolt-style safety is located just forward of and above the trigger.

The standard length for the NCH’s heavy contour, hand-lapped, free-floated barrel is 15 inches; however, customers can request one be made from 12 to 18 inches in length, and fluting is offered for a nominal fee. The match-grade Shilen 416R barrel has a threaded muzzle for the addition of a sound suppressor, or a Harrell’s Precision Tactical 4-Port brake—again, as an additional cost. For the larger chamberings, I’d recommend adding the brake. 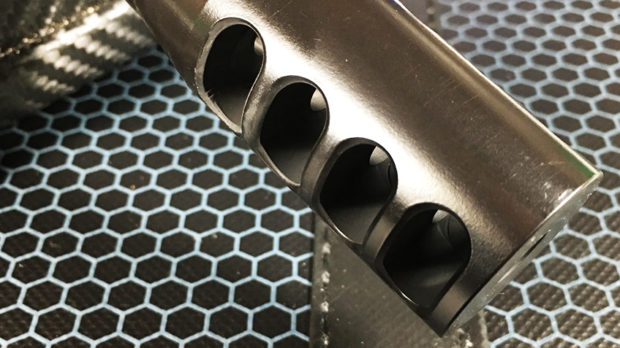 The barreled action is secured to a one-piece, CNC-machined stock that’s made from 6061-T6 aircraft-grade aluminum and available in a wide variety of NIC Industries Cerakote finish colors. Since the barrel and stock are coated separately, two different colors can be utilized.

To improve accuracy, the barreled action has been glass bedded to the mid-grip stock in the lug and tang areas. Designed with duality in mind, the stock tapers to 1⅜-inch wide along its flat fore-end—perfect for bench work—while a sling swivel stud facilitates the attachment of a bipod for field use. Two additional drilled-and-tapped holes allow the user to move the stud forward or rearward to suit his or her preference. Two series of diagonal cutouts—one per side—in the fore-end add to its aesthetics while also quickening barrel cooling. 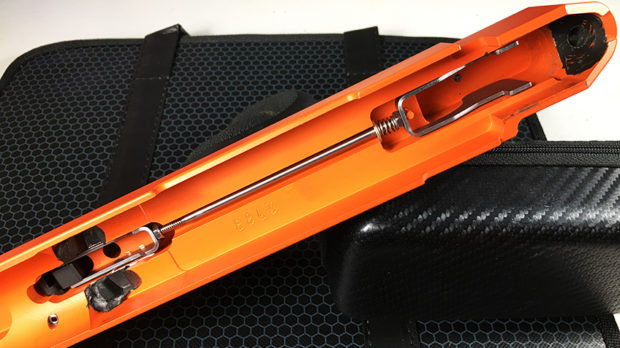 Lastly, the NCH comes standard with a black, textured Hogue OverMolded rubber grip with finger grooves. But, the purchaser can quickly and easily swap out the Hogue for any standard AR-15-style grip if so desired.

Visually pleasing, the orange and black NCH I received for evaluation was chambered in the immensely capable but underrated 7mm-08 Remington, and was topped with a Leupold FX-II Scout IER 2.5X- 28mm scope—a fine choice for hunting, but limiting for accuracy testing at 100 yards. Absent a handgun scope with a main tube long enough to span the distance between the rings, I opted to stick with the Scout scope and test the gun at 50 yds. Ammunition for the test included: Federal 140-grain Barnes TSX; Federal 120-grain Fusion Soft Point; and Nosler 140-grain Ballistic Tip. 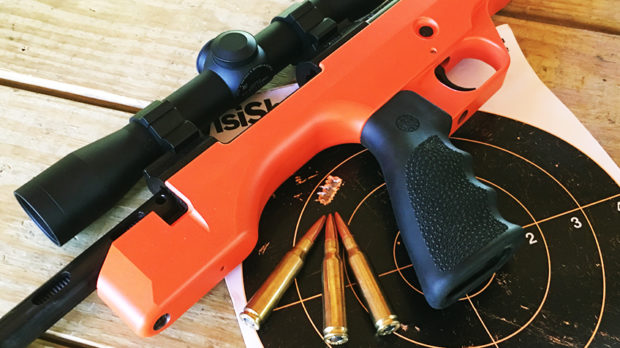 From a sandbag rest, the NCH showed uncanny accuracy; in fact, I cannot ever recall evaluating a more accurate handgun—period. It was almost boring, or scary, accurate. The sample Model 48 NCH showed a slight preference for the Nosler load, averaging .39-inch for five consecutive, 3-shot groups. Yes, you read that right. The single smallest group measured a scant .28-inch. Not far behind was Federal’s TSX load, which had a mean of .45-inch. Even the economical Fusion offering averaged .57-inch for all 15 shots. Such accuracy can be attributed to its match-grade components, a phenomenal stock design and the superior trigger.

In handling and shooting the NCH, I found the cutout in the stock rearward of the grip to both increase shooter comfort and enhance purchase; in fact, outside of the gun’s length (21 inches) and weight (5.78 pounds sans scope), in the hands, the gun holds and points like a semi-auto designed for defense. It’s non-fatiguing to hold, and its balance is unbelievable. It also nicely nestles into the sandbags.

It’s clear to me that the NCH’s stock was thoughtfully designed from the get-go and not an afterthought. The brake minimized perceived recoil, though the attendant noise increased markedly. If you’re shooting at an indoor facility or covered bench, doubling up on hearing protection would be a good idea. Still, I’d opt for the brake any day. 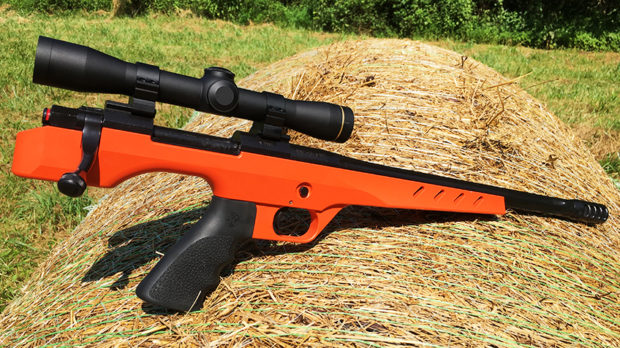 With a price tag of $2,495, the Model 48 NCH is clearly not an everyman’s hunting handgun. But it’s about as good of one that you’ll ever find, at any price point. The handgun hunter looking for a top-tier product that’ll last a lifetime and deliver the accuracy required to down game at distance need look no further.