A Georgia state lawmaker appears to have been caught lying about her allegation that she was told to “go to back to where you came from” by a white customer in an Atlanta grocery store.

On Friday, Erica Thomas, a Democrat, alleged that a “white man” called her a “lazy son of a b*tch” and told her to “go back” to where she came from. (RELATED: ‘Incredible Patriots’ — Trump Stands Behind North Carolina Rally Crowd Despite ‘Send Her Back’ Chant)

“Today I was verbally assaulted in the grocery store by a white man who told me I was a lazy SOB and to go back to where I came from bc I had to many items in the express lane,” Thomas said in a Friday tweet. “My husband wasn’t there to defend me because he is on Active Duty serving the country I came from USA!”

Today I was verbally assaulted in the grocery store by a white man who told me I was a lazy SOB and to go back to where I came from bc I had to many items in the express lane. My husband wasn’t there to defend me because he is on Active Duty serving the country I came from USA!

On the same day Thomas detailed the alleged encounter in a Facebook live video. She opened up by saying, “People are getting really out of control with this white privilege stuff.”

On Sunday, Eric Sparkes stepped forwarded and claimed he was the man that Thomas was referring to in the grocery store. He denied ever making any racially charged insults towards Thomas and said he only called her a “lazy b*itch” because she had too many items in the express checkout lane.

“I’m a liar about what?” Thomas said while yelling at Sparkes, who were both being interviewed by local media.

“Everything that happened,” Sparkes responded. “Me telling you to ‘Go back where you came from.’ Did I say that? Is it on video?”

“Are you serious? What did you say to me then,” Thomas asked.

“I called you a lazy b*tch,” Sparkes answered. “That’s the worst thing I said.”

Sparkes told reporters that he is a Democrat and a Hispanic American who vehemently opposes President Trump. He added that Thomas was only doing this to help further her political career.

“She’s doing it for political purposes,” Sparkes said in a video by CBS 46. “I’m a Democrat. I will vote Democrat the rest of my life. Okay. So to call me what she wants to believe, for her political purposes, to make it black, white, brown, or whatever. It is so untrue.”

Facebook posts from Sparkes do show that he is not a big fan of the president. He was especially critical of Trump this week for his attack on the “squad.”

On July 12, Sparkes wrote another anti-Trump post where he stated, “For the Trumpers I grew up with this is the hidden and outright vocal bigotry, ignorance and racism I experienced at times because my grandmother did not speak English, only Spanish.” Sparkes continued, writing, “So my anger comes, FU all racists and to the ones that say you aren’t racist then you are lying to yourselves.” 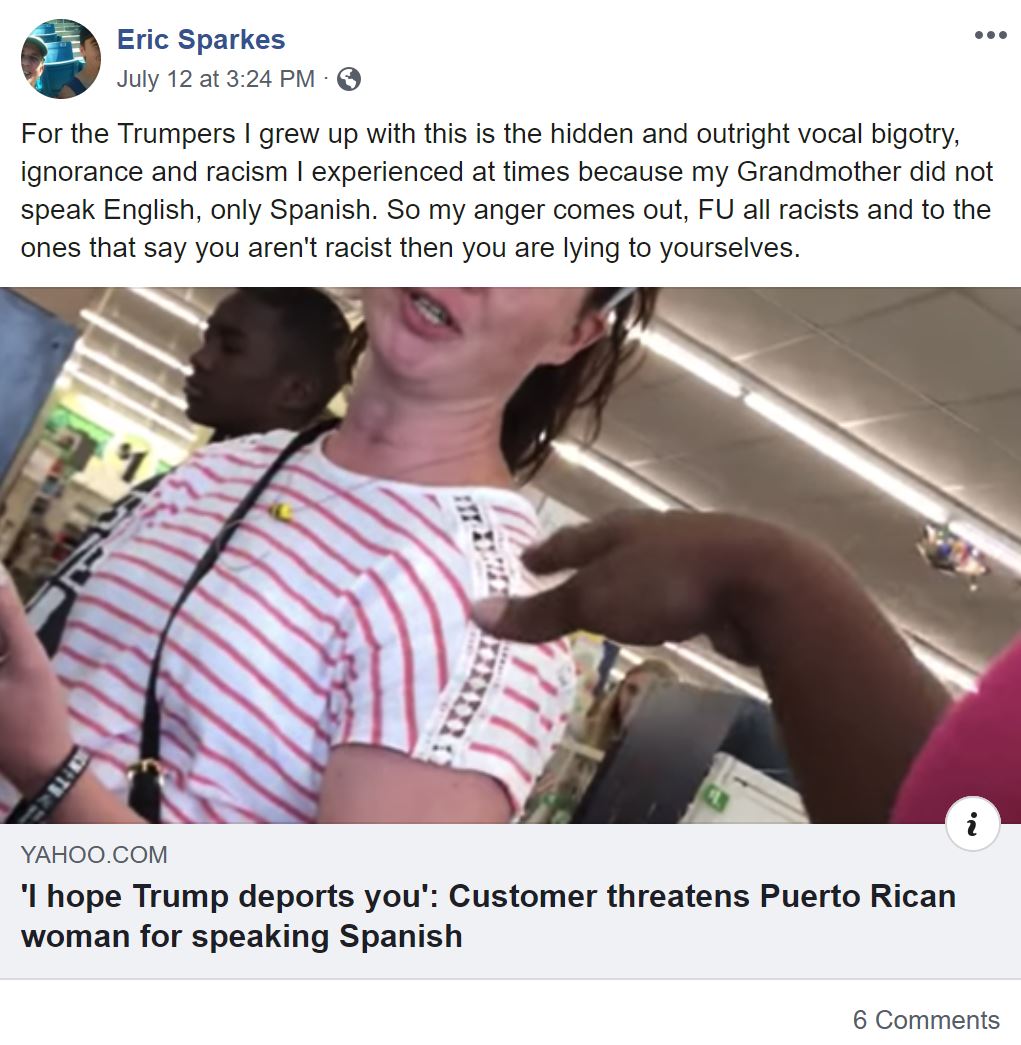 Many were outraged when Sparkes stepped forward to claim Thomas had made up the racial insults. (RELATED: Twitter Suspends Angel Mom’s Account For Criticizing Kamala Harris)

I told a friend of mine earlier that I would bet her a hundred dollars that Erica Thomas was just Jussie Smollett 2.0 and doing the whole thing for attention and sure enough… I was right. https://t.co/tfPVzvYxP3

Interesting. Here’s the other side of the story:

Dem. Erica Thomas accused this man of telling her to “go back where she came from,” but he’s says it was simply a dispute because she had 20 items in the express lane.

Later, Thomas appeared to walk back her claims saying that Sparkes may not have exactly told her to go back to her country.

“I don’t want to say he said, ‘Go back to your country,’ or ‘Go back to where you came from,'” Thomas said. “But he was making those types of references is what I remember.”

Erica Thomas is now walking about her claim that she was told to “go back to your country.” pic.twitter.com/mMVhT2QSEk

On Saturday, after Sparkes had stepped forward, California Sen. Ted Lieu deleted his tweet of support for Thomas where he blamed the incident on Trump and Republicans.

What? @RepTedLieu deleted this already? Did he post an update? An apology? An explanation? https://t.co/VBwdpC2IUk