The transgender woman who filed gender-identity discrimination complaints against mostly poor, immigrant women for refusing to bikini wax biological male genitalia is seeking permission to hold three “topless” swims for people ages 12 and up, and parents would be barred from attending.

Jessica Yaniv is scheduled to appear before the Township of Langley Council in British Columbia, Canada, July 22 at 7:00 pm to ask for permission for an “All-Bodies Swims” at three community pools where individuals, including girls as young as 12, will be permitted to be topless. The swim is for kids who identify as “LGBTQ2S+”. In the appeal to bar parents from attending, Yaniv cited an interest in fostering a “safe and inclusive” environment. 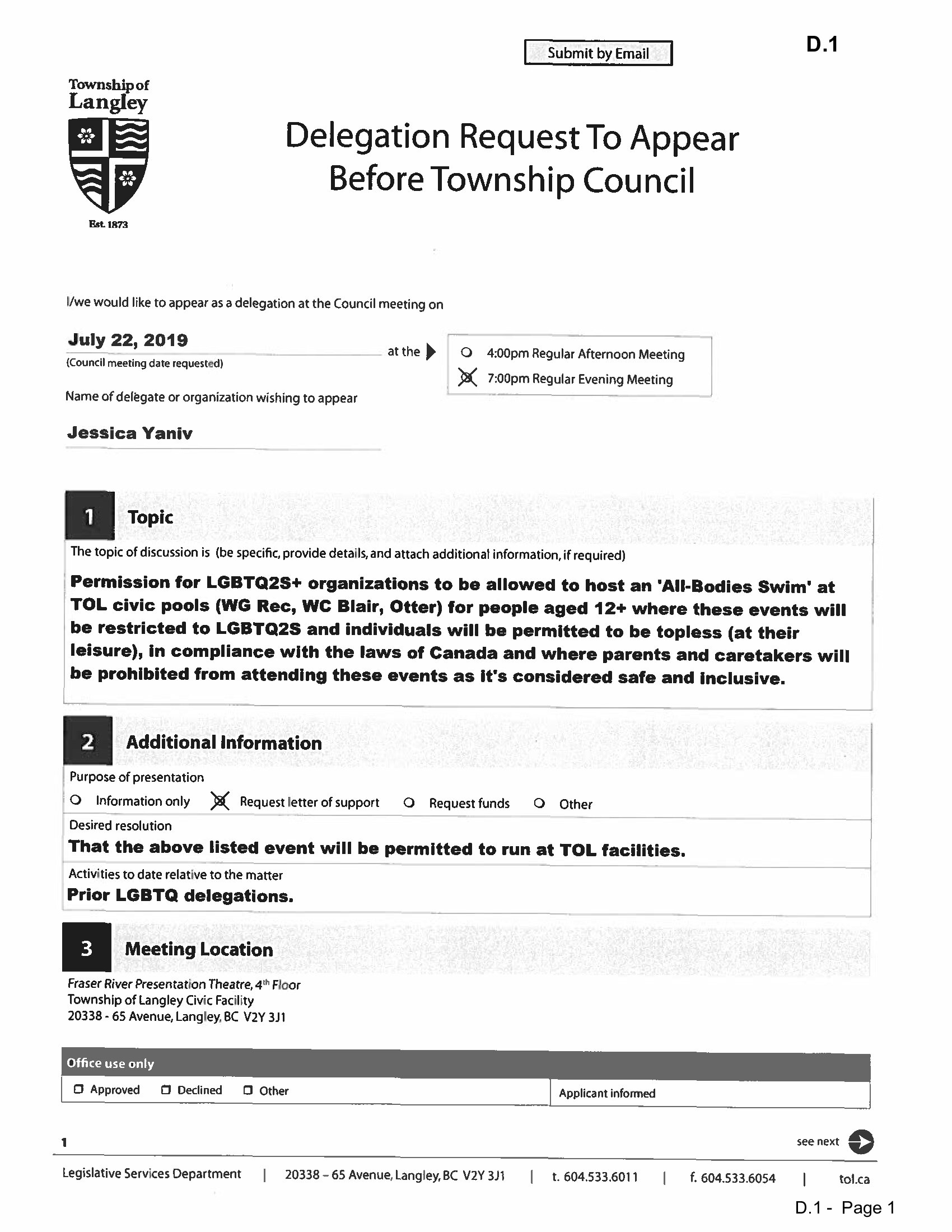 Yaniv has a history of making inappropriate remarks regarding young girls and faces allegations of predatory behavior towards girls online. It is unclear if Yaniv will attend the swims. (RELATED: Trans Woman Shutters Immigrant’s Business For Refusing To Wax Male Genitalia)

When a Twitter user asked Yaniv about the topless pool party, Yaniv responded, “What’s the problem with 12 year old topless girls? Let them be theirselves.” The following tweets have now been deleted. 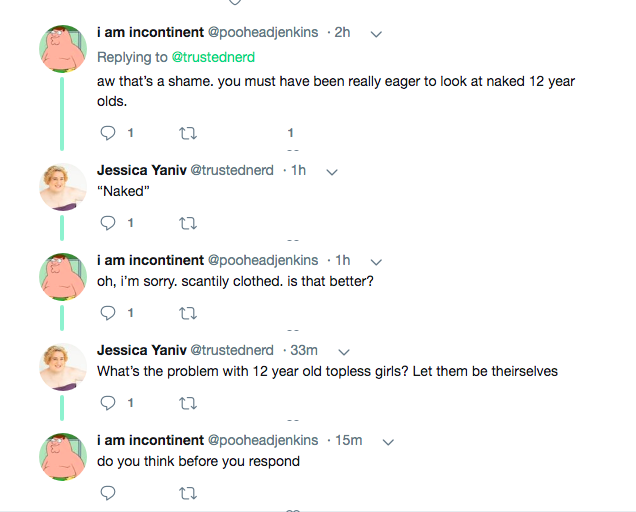 Yaniv tweeted: “What’s the problem with 12 year old topless girls? Let them be theirselves”. These tweets have now been deleted. (Twitter/@trustednerd)

An earlier “all-bodies” swim at Langley City pool aimed at “LGBTQ2S” youth was cancelled in early July due to objections on social media to its exclusion of parents and guardians. This event said “anything below the waist must be covered,” and said topless swimming was allowed. It also said “Gender- inclusive change rooms and washrooms are available.”

LGBTQ+ All-bodies swim in Langley BC is an upcoming pool party on July 10th, put on by adults where only children are allowed to enter. The flier says that kids can be topless and strictly prohibits legal adult guardians from entering….

Let’s get the party cancelled ???? pic.twitter.com/HFDndPN8gm

The City of Langley, the Langley Local Action Team and Encompass Support Services Society all supported and helped organize the first planned topless swim, according to Penticton Western News. The organizers eventually called off the event.

Yaniv vowed to start another pool party for LGBT youth following that cancellation.

“I’m going to get this party RESTARTED. July 22nd, 7 PM at the TOL as a delegation,” Yaniv said on Twitter July 13.

Dozens of texts by “Jonathan Yaniv,” Yaniv’s name before transitioning, show Yaniv discussing in a disturbing manner what it would be like to share a changing room with girls as young as 10.

“Like even though I have a dick unfortunately.. i can be fully out there and change with them [girls]? Like, I don’t want them to give me any issues or things,” Yaniv said.

In another message, Yaniv sent a picture wearing a woman’s bathing suit, and said, “The hard part is, I’ll need a girl to tie it on the back for me cause I can’t do it myself it’s really tricky.”

At the Human Rights Tribunal for the genital waxing case, Yaniv denied making these comments.

“I tracked down and heard witnesses with first-person accounts of Jessica’s online behaviour spanning 2013 to 2018,” Oger said. “Their stories included reports and evidence of outrageously inappropriate acts, some towards children who are tweens and teens. Some of the material has survived as screenshots, and what I saw shows what strikes me as a pattern of predatory behaviour.”

Oger “urged each woman to make a complaint with police,” about Jessica Yaniv’s harassment. Oger said the allegations against Yaniv have not been proven or ruled on by a court.