Fox News hit back at multiple rumors throughout the week that the network is not airing the Mueller testimony Wednesday.

Fox aired a promotion, a press release and has a section about covering the Mueller report on its website. Some media figures originally said Fox News was not airing the Mueller hearings, later walking back the remarks through Twitter.

“I’ve deleted an earlier tweet I intended ironically, but that some took as factual regarding Fox news coverage of Mueller’s testimony,” she said. “My apologies to anyone I confused. I don’t like to delete tweets but that seems a better course than unintentionally misinforming people.” 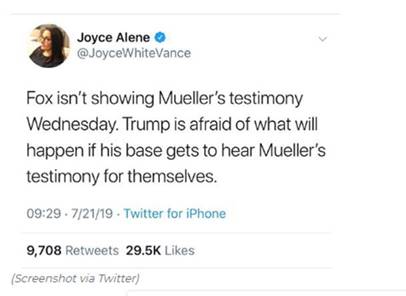 MSNBC’s Joyce Alene tweeted alleging that Fox News was not airing the Mueller report, before deleting the tweet and walking it back the next day. (Screenshot Twitter/Joyce Alene)

“Fox isn’t covering the hearings, which should also tell you how scared they are of what could happen on this morning,” Wilson said. “It’s going to be a very interesting and consequential moment. They’re apparently not going to take them live. Everybody else is taking them live.” (RELATED: What To Expect From Mueller’s Highly Anticipated Testimony)

I stand corrected: Fox apparently will cover the Mueller hearings.

The MAGA Javerts were all aflutter.

Fox News host Bret Baier, whose show will be airing the Mueller testimony, tweeted multiple times that the network would be airing the show Wednesday featuring himself and Martha MacCallum.

For those who may have missed the on air promos — https://t.co/Zd3kIlvx39

Fox pointed the Daily Caller News Foundation to the promotion the network said has been running since July 19, adding that it will be showing the testimony Wednesday.

MSNBC did not immediately respond to a request for comment from the DCNF.

EDITOR’S NOTE: This article has been updated to reflect that Rick Wilson was the individual who tweeted a correction.