Republican Iowa Sen. Joni Ernst said the crisis at the border is “very real” following her visit to the southern border in McAllen, Texas.

Ernst took part in a visit along with Sens. Bill Cassidy of Louisiana and James Lankford of Oklahoma. The senator, who also serves as vice chairman of the Senate Republican Conference, said she toured multiple detention facilities and went on a ride-along with agents.

Ernst also visited unaccompanied children and experienced the apprehension of a family first-hand, she told the Daily Caller News Foundation on Tuesday after the three-day trip over the weekend.

She said the border crisis is not something that is “manufactured,” but rather “very real.”

“This isn’t a manufactured crisis,” Ernst told the DCNF. “The crisis we have at our border is very real — it is a humanitarian crisis.”

The detention centers are “very safe,” Ernst said, although she expressed concern that they are at their maximum capacity.

“The facilities are full,” she said. “They’re at their maximum capacity.”

Customs and Border Protection (CBP) personnel are “extremely compassionate,” and the crisis has affected their ability to effectively patrol the border, according to Ernst. She said about 60% of agents’ time is “spent dealing with the humanitarian crisis” rather than keeping the border safe.

“What we don’t hear about on the news is the fact that when the Democrats were pushing back and not wanting to fund the hygiene items and all of the extra resources needed for these detention facilities … those agents were pulling money out of their own pockets to buy diapers and formula,” Ernst said. “They care a lot about the people that they’re charged with.” 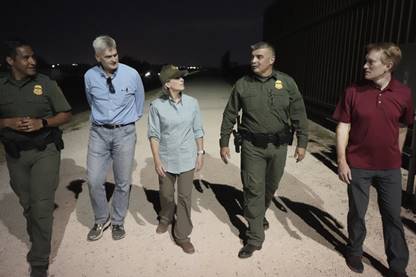 Ernst experienced first-hand how overwhelmed agents are while patrolling the border. During a ride-along, she said there were multiple calls regarding reports of illegal immigrants crossing in just a four-mile area. In one instance, they encountered a family of 10 to 12 people, she said.

“They knew CBP would pick them up, transport them to the detention facility and then in a few days they would be released,” she explained. “If they are family units, they don’t try to run away from us — they run toward us.”

“I need to push back on that,” Ernst said. “I mean, it is so disrespectful to call them concentration camps, and I push back heavily on that. There are only certain people who are calling them that, and I would say that’s anti-Semitic. That is inappropriate.”