Criminal charges will not be filed against a Georgia man accused of verbally abusing a state lawmaker for bringing too many items into the express checkout lane at a Mableton Publix supermarket.

Georgia Democratic State Rep. Erica Thomas took to Twitter and Facebook Live on Friday to accuse a “white man” of verbally abusing her, calling her a “lazy son of a b*tch” and telling her to “go back” to where she came from.

The incident came on the heels of President Donald Trump tweeting that four far-left Democratic congresswomen should “go back” and fix their home countries — in spite of the fact that three of the four were born in the United States. Several days later, a Greenville, North Carolina crowd chanted, “end her back!” when the president mentioned Democratic Minnesota Rep. Ilhan Omar during a rally.

Thomas appeared to walk back some of the more inflammatory claims Saturday:

“Thomas said she remembered ‘go back’ was part of their exchange because, ‘I told him, ‘go back,'” USA Today reported.

.@itsericathomas appears to be walking back her viral claim a white racist told her to “go back” to where she came from. Reporter @CJenningsWSB asked her about the accusation while in front of the man: https://t.co/4y1OXAd9CA pic.twitter.com/3ShUYj5Byy

The accused man, Eric Sparkes, spoke to reporters Saturday in front of the Publix where the incident occurred.

Claiming to be a lifelong Democrat with a Cuban grandmother, Sparkes told Thomas, who confronted him at the press conference, that calling her a “lazy son of a b*tch” was the “worst thing” he said.

Cobb County police have ruled out charges against Sparkes, according to a statement issued Tuesday through a spokesman:

Both parties have been advised there will be no charges made by the Cobb County Police Department. Both were provided information on how to contact the Cobb County Magistrate’s Office if either wished to pursue any further criminal action.

The police report, detailing an investigation into the charges of “simple assault & battery,” was made public Tuesday and obtained by the Daily Caller. 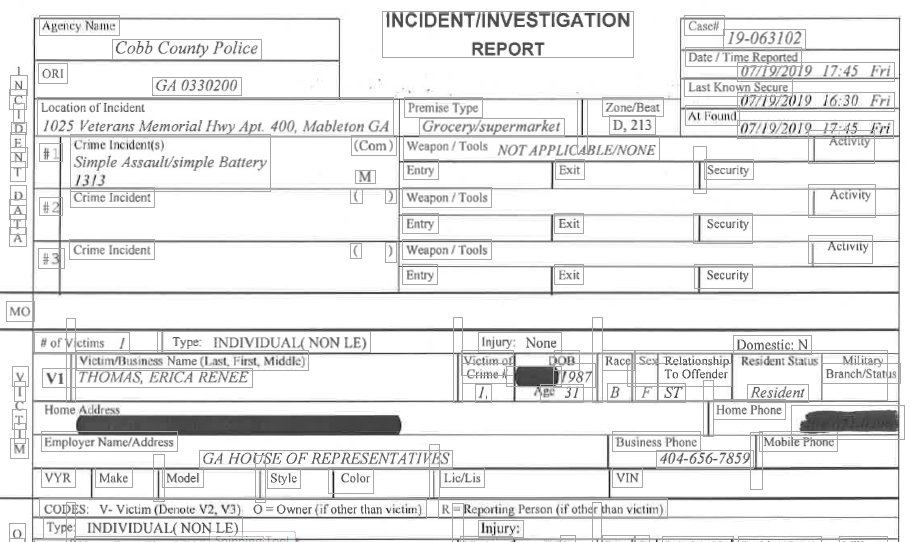 In it, the responding officer writes that Thomas said Sparkes had approached her “in an aggressive and irate manner” that “made her fearful for her safety and the safety of her juvenile daughter.”

In the detailed write-up about the interaction with Thomas, the officer noted that Thomas said Sparks “approached her (ran upon her) with clenched hands and pointing at her.” (RELATED: ‘Four Horsewomen Of The Apocalypse’ — Sen. John Kennedy Rips Squad ‘Whack Jobs’)

She said, “He ran-up on me with clenched hands in such a manner that he made me fearful for the safety of myself and my daughter. He began complaining about her having more than 10 items in the express lane.” Ms. Thomas stated she began to explain to Mr. Sparkes that she was nine months pregnant and could not stand for a long period of time. She said Mr. Sparkes then interrupted her and told her “No, you are a lazy son of a bitch,” and that “You people are ignorant and should go back to where you came from, you piece of shit!”

Ms. Thomas continued to tell me that initially, she thought Mr. Sparkes was joking, but quickly realized he was visibly angry and very irate. He continuously approached her (ran upon her) with clenched hands and pointing at her, putting her in fear for the safety of herself and her daughter. She also said that she was initially afraid to leave the store, worried Mr. Sparkes may be waiting for her outside. After waiting a few minutes, she and her daughter did leave. She said she went home to calm down and then she called Deputy Chief Hamilton. Ms. Thomas was adamant about identifying the suspect and pursuing charges against the suspect for assault and 3rd-degree child cruelty.

Police spoke with store management, witnesses, and reviewed surveillance video, describing that Sparkes could not be seen “with clenched hands in the video.”

The first video clip I observed showed the Mr. Sparkes being checked out several registers down from the express lane. Mr. Sparkes paid for his items and began walking toward the door.

The second video clip I observed showed Mr. Sparkes walk to the first set of exit doors where he stopped and began speaking with Ms. Murrell who was standing at the exit. The video does not have audio, so what was said is unknown. After speaking with Ms. Murrell he then departs the inner doors and leaves the frame of the video. A few seconds later, Mr. Sparkes returns through the door and goes straight to the express lane where Ms. Thomas and her daughter were checking out. He points at the entrance of the express lane, possibly at the sign and they clearly begin arguing. Mr. Sparkes did not appear to be irate, nor did I see him with clenched hands in the video. He initially did enter Ms. Thomas’ personal space but backed as Ms. Thomas moved forward and around the counter toward Mr. Sparkes pointing her finger at him. Ms. Thomas advanced toward Mr. Sparkes a second time at which point, Ms. Murrell comes into the frame and waves for Mr. Sparkes to leave, which he did. Simultaneously, Ms. Thomas returned to the register, stated something to-her daughter and then paid for her items. I observed-Ms. Thomas’ daughter smiling shortly after. This confrontation lasted approximately 45 seconds.

The report then detailed Sparkes’ side of the story:

Mr. Sparkes told me he stopped at the Publix and picked up three items to purchase. As he approached the express lane, he noticed Ms. Thomas was off-loading more than IO items. He said that it bothered him, but he did not say anything, instead he went a few lanes down and checked out. As he was leaving, he noticed Ms. Thomas was still in the express lane. He observed the Customer Service Manager, Ms. Murrell at the exit and he stopped to ask if there was anything she could do about people with more than ten items utilizing the express lane. He said, Ms. Murrell advised him it was against store policy to refuse service to anyone at the express lane, regardless of the number of items they have. He said she also informed him that it they cannot stop other customers from saying anything to customers who exceed the limit of the express lane. Mr. Sparkes said he then began to leave and decided to say something to Ms. Thomas.

Mr. Sparkes told me he approached Ms. Thomas very politely and told her “Ma’am, not to be rude, but the line you are in is for IO items or less, as he pointed out the sign to her.” He said he expected an apology or a simple, “it will not happen again,” but instead she “blew-up” becoming very angry and began angrily approaching him stating she was nine months pregnant and that it was none of his business, at which time he backed-up to maintain his distance. Mr. Sparkes said he told her that it did not matter that she was pregnant and that it was his business, it was everyone’s business. He also told her she was being selfish. He said he did not remember exactly what was said after that, but he does remember her telling him to, “Go back where you came from,” multiple times as she advanced on him pointing her finger at him. Mr. Sparkes admitted calling Ms. Thomas a, “lazy bitch,” which he regrets saying. He said he also called her ignorant, but never did he say, “Your people are ignorant,” as Ms. Thomas has stated to the media. I collected Mr. Sparkes information and he left the area.

The store’s customer service manager told police she “heard Ms. Thomas continuously tell Mr. Sparkes to, ‘Go back where you came from!'” according to the police report.

A second Publix employee, a cashier named Derrick Tompkins, was asked whether Sparkes had told Ms. Thomas to “go back to where she came from,” said he hadn’t heard that. “I’m not going to say that wasn’t said,” he conceded. “But I don’t remember hearing it. I’m going to leave it at that.”