The rising protests toward Hong Kong’s extradition bill may have finally struck a chord in Beijing, as the Chinese military hints at future military intervention to quell rioting. Chinese officials vow to quash anti-Beijing protests if the local government in Hong Kong fails to control the political crisis.

Chinese Defense Ministry spokesman Wu Qian called the protests “intolerable” in a recent news conference. “Some radical protesters’ actions challenge the authority of the central government and the bottom line of ‘One Country, Two Systems,’” Wu stated, vowing that the ministry would abide by Article 14 of Hong Kong’s Basic Law in reaction to acts of violence.

Article 14 allows the Chinese military to maintain a presence in Hong Kong but bars it from interfering with local affairs unless the country requests assistance for disaster relief.  China maintains roughly 6,000 troops in Hong Kong, which can only deploy in situations “to carry out the task of assistance in maintenance of public order,” according to law governing the former British colony and mainland China.

While Hong Kong is a separate independent country, China classifies the it under the “One Country, Two Systems.” Under this policy, Hong Kong acts as a part of China but retains some of its own autonomy.

The local government in Hong Kong and various analysts have expressed doubt that the Chinese military will intervene in the protests, which may have devastating consequences. China has not intervened militarily in pro-democracy affairs since the historic Tienanmen Square crackdown on protesters in 1989. (RELATED: Leader Of Hong Kong Apologizes To Protesters After Halting Extradition Bill)

The protests in Hong Kong have further deteriorated over the past two months. A violent clash erupted between protesters and police on July 14th in a prominent shopping mall in Sha Tin. The unrest erupted to greater heights on Sunday when the protesters vandalized China’s liaison office in Hong Kong, sparking outrage in Beijing. 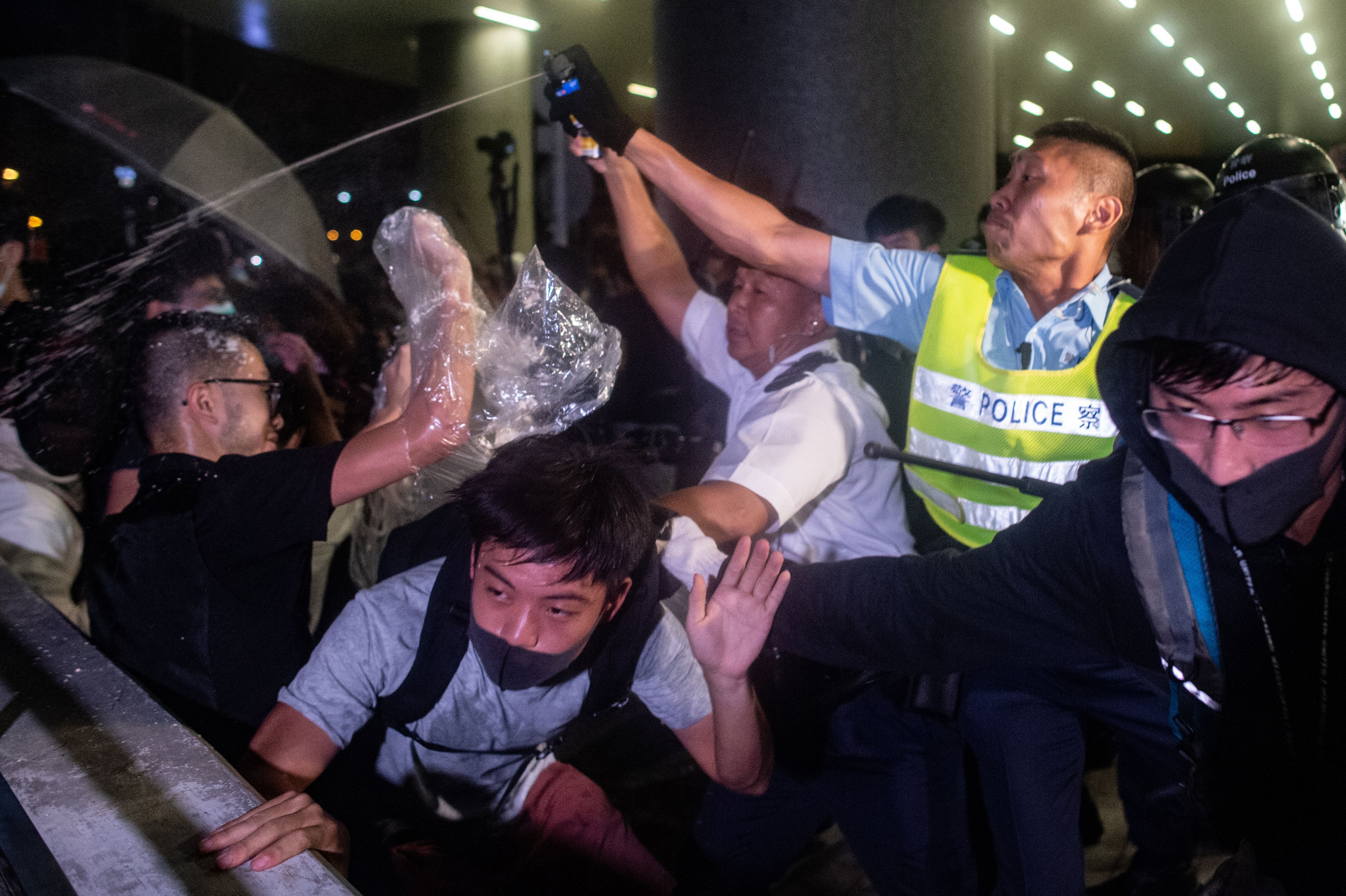 A police officer uses pepper spray during a clash at Legislative Council in Hong Kong after a rally against a controversial extradition law proposal in Hong Kong on early June 10, 2019. PHILIP FONG/AFP/Getty Images

Bands of white-shirted men armed with batons swarmed upon a crowded train station filled with people apparently returning from the protests. More than 40 people were hospitalized before police arrived after the attacks were over, and none of the assailants were arrested. This was the first time that the protests in Hong Kong directly challenged a Chinese government building.

Protests in Hong Kong first sparked in early June when the Beijing-backed local government attempted to pass legislation that would allow extraditions of convicted criminals to mainland China. Activists have called such legislation “legalized kidnapping” and have demanded the resignation of Hong Kong chief executive Carrie Lam.

“Hong Kong is China’s Hong Kong. China will absolutely not allow any foreign power to intervene in Hong Kong affairs,” said Foreign Ministry spokeswoman Hua Chunying during a Tuesday press conference. “We urge America to withdraw their black hands from Hong Kong before it is too late.”

While there has been no evidence of U.S. involvement in the Hong Kong protests, the recent U.S.-China trade war has complicated relations between Beijing and Washington.