CNN hired an Egyptian-born photojournalist who has referred to Jewish people and Egyptian police as “pigs” multiple times on his official Twitter account and also called for people to be murdered.

Mohammed Elshamy, a photo editor for CNN, was hired by the news outlet in 2019, according to an announcement on his Twitter. Past tweets by Elshamy include him referring to Jews and police as “pigs” and even calling for officials to be murdered. Anti-Israel comments are also scattered throughout Elshamy’s past tweets.

One photo shared by Elshamy calls for the killing of multiple people. He captioned the photo “My dream #egypt #pigs.” In another tweet from 2011, Elshamy suggested that he could kill someone and call it self-defense in Israel. 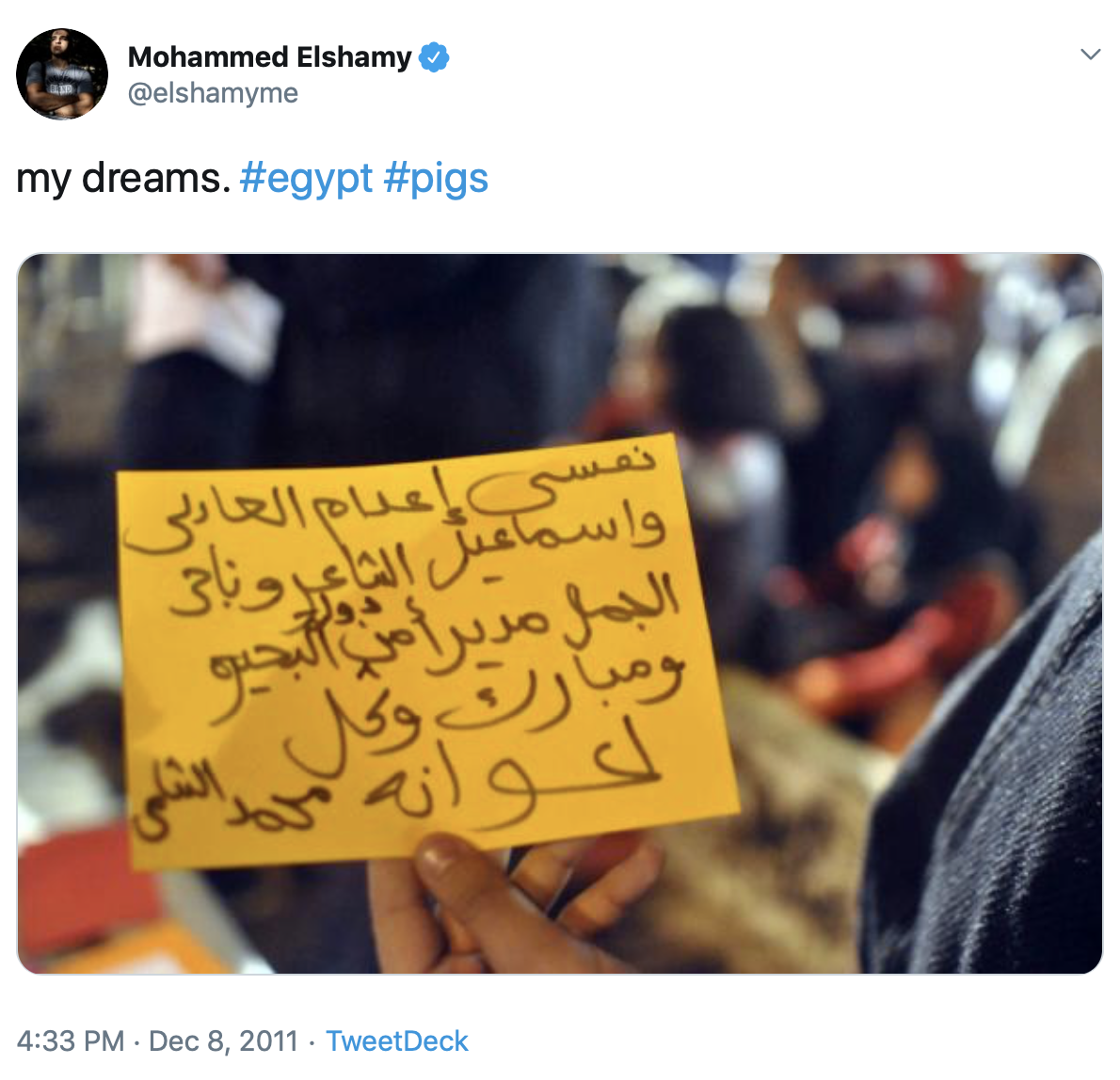 A tweet by Elshamy reads ‘#IamIsrael’ and then talks about killing someone and calling it self defense. (Screenshot Twitter/Mohammed Elshamy)

This tweet translates to “We counter you generation after generation – we’re hunting you Israel.” (Screenshot Twitter/Mohammed Elshamy)

Elshamy referred to Jewish people as “pigs” and posted anti-Israel tweets on his official page. One tweet said that he was proud of the “army generation that liberated us from the zionist pigs” in 1973. The date written in this tweet refers to the The Yom Kippur War, when Egypt and Syria attacked Israel on the holiest day in the Jewish calendar.

“More than 4 jewish pigs killed in #Jerusalem today by the Palestinian bomb explode,” a tweet by Elshamy read in 2011. Another read that “Israel is the main enemy for the people of Egypt and shall always remain despite rulers who lick Jewish legs.” (RELATED: Rashida Tlaib’s Ties To Anti-Semitism Run Deeper Than Previously Known)

Elshamy also referred to police as “pigs” in multiple tweets throughout 2011.

“I’m happy that I lived to the day that I threw rocks and redirected a tear gas against interior ministry pigs before I die,” one tweet read.

Another stated “I’m with clearing #tahrir from these pigs and killing them.” Tahrir Square is a major public town square in Cairo, Egypt.

A third reads “Why is my dad trying to persuade me in joining Police Academy??!! #pigs #felmeshmesh

CNN accepted the resignation of a photo editor who joined the news outlet earlier this year, according to a statement given to the DCNF by Matt Dornic, Vice President of Communications and Digital Partnerships.

“The network has accepted the resignation of a photo editor, who joined CNN earlier this year, after anti-Semitic statements he’d made in 2011 came to light,” the statement read. “CNN is committed to maintaining a workplace in which every employee feels safe, secure and free from discrimination regardless of race, gender, sexual orientation or religion.”

Elshamy did not respond to a request for comment.