White liberal academics can earn more in a day lecturing about their own “white privilege” than the median black household makes in three months, public records obtained by the Daily Caller News Foundation and U.S. Census data show.

Left-wing academic Robin DiAngelo is renowned in social justice circles for crafting the “white privilege checklist” and for coining the term “white fragility.” Listening to her speak comes at a steep price.

DiAngelo, who is white, charged the University of Kentucky $12,000, not counting travel expenses, housing accommodations and meals, for a two-hour “Racial Justice Keynote and breakout session” in March, according to a copy of the speaking contract obtained by the DCNF through public records requests.

“Dr. DiAngelo’s schedule cannot accommodate phone calls related to services,” the contract states, instructing that all communications be sent via email or through DiAngelo’s assistant. “If phone calls are deemed necessary, they will be charged at a rate of $320 per hour.”

DiAngelo’s fee for the event was more than a quarter of the annual median income for black families which is just over $40,000, according to U.S. Census data.

The description for the two-hour event said DiAngelo would be talking about her book, “White Fragility: Why is it so hard for white people to talk about racism?”

Her website defines “white fragility” as “a state in which even a minimal challenge to the white position becomes intolerable, triggering a range of defensive responses. These responses function to reinstate white racial equilibrium and maintain white control.”

The consulting and keynotes section of DiAngelo’s website says her lectures take an “anti-racist” approach based on ideas.

“Racism is the foundation of Western society; we are socialized into a racial hierarchy,” it says. It also touts her “expertise” in “clearly and accessibly presenting information that is politically and emotionally charged.” 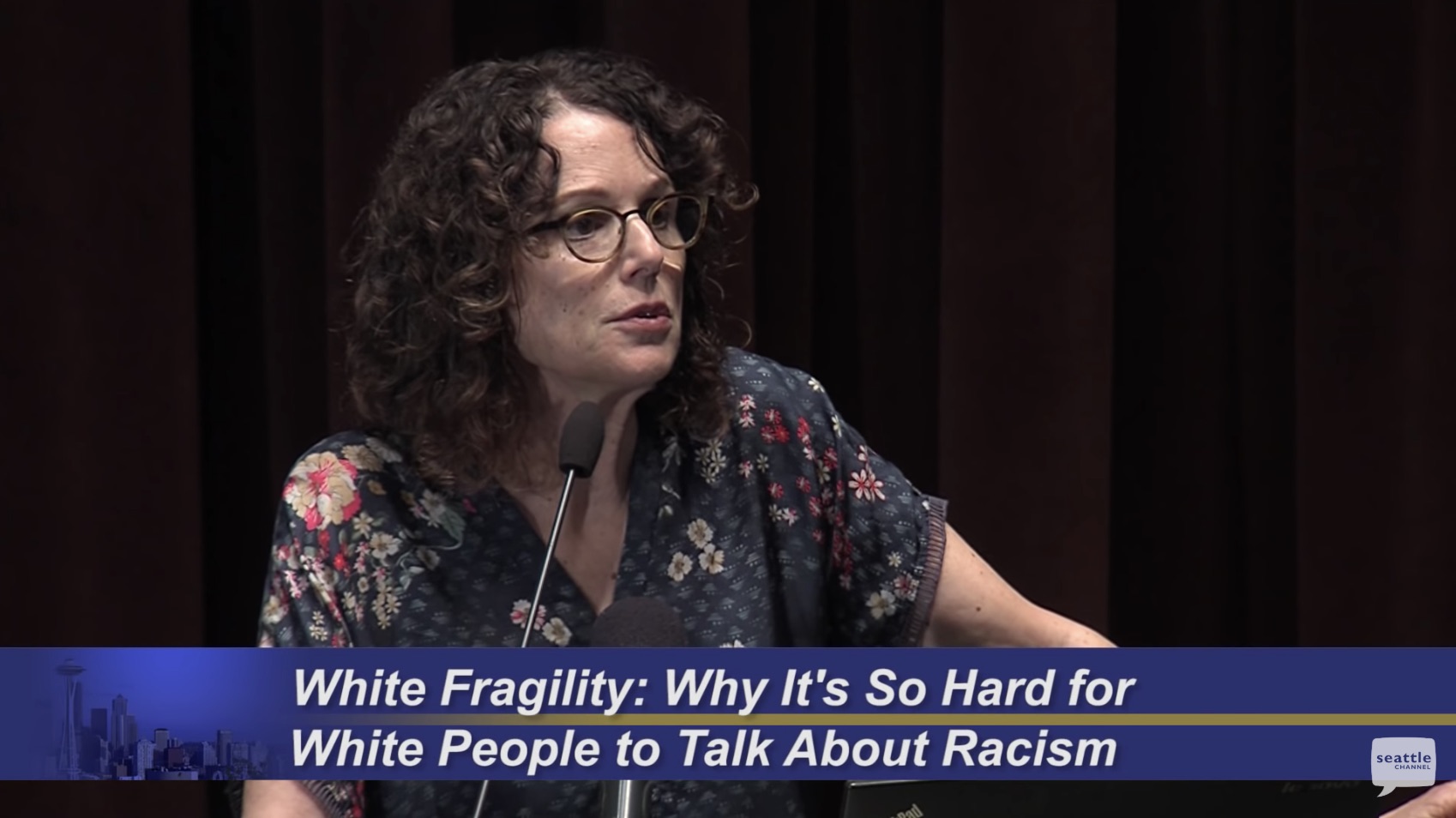 The author is in high demand: Her website says she’s booked through March 2020. Tickets for a half-day workshop she led in San Francisco earlier this month started at $130 for adults and $65 for kids.

DiAngelo’s fee typically runs between $10,000 and $15,000, a city official in Everett, Washington, where DiAngelo keynoted a conference in April, told the DCNF. The city government promoted the conference on its website, but the official said all costs were covered by an outside nonprofit, Communities of Color Coalition. The nonprofit didn’t return the DCNF’s inquiries.

DiAngelo’s clients include Amazon, The Bill & Melinda Gates Foundation, The Hollywood Writer’s Guild, the YMCA Seattle Public Schools and City of Oakland, among others, according to her website. DiAngelo did not return multiple requests for comment. (RELATED: ‘Highly Profitable Scam’: Former SPLC Staffers Come Clean)

He added that the agency, which receives 25 percent of his fees, “puts money back into grass-roots organizing and leadership development led by individuals and groups of color. So between that, and the fact that they promote an overwhelming share of [people of color] on their roster, my working through them actually helps to amplify the voices of people of color, not just my own.”

The University of Michigan, a taxpayer-funded institution, paid Wise $10,000 to speak at a Martin Luther King Jr. symposium in January, public records obtained by the DCNF show.

“I am brought in, in almost all cases by people of color on campuses: staff, faculty or students of color,” Wise told the DCNF. “They are the ones making the decision to bring me in, and pay me, typically because they surmise (probably quite accurately) that it would be helpful to have a white voice speaking to these issues, rather than having to always do the heavy lifting themselves, or leave it up to folks of color to be the ones educating others about issues of racism.”

“In other words, I am responding to the decision by people of color in most cases to have a white speaker like myself come and add my voice to a conversation they are already leading in most instances,” he continued. “In most all of these cases, the schools have also brought in people of color throughout the year to speak to these matters, but feel that it is not pedagogically helpful to give the impression that these are just black and brown folks’ issues, or things about which white folks shouldn’t be speaking out too.”

“One can agree or disagree with their thinking on this matter, but at least let’s be clear: it is people of color who are making that call, and I tend to assume they know the climate on their campuses better than I do,” Wise said. “If they think I can be helpful, so be it. This is why they request me when they do. It is what they say explicitly to me, and to my agency/organization.”

Wise added that “if a school wants to have an event with me and a person of color, perhaps in conversation, that if my fee is normally higher than the other person’s that they must either raise that person’s fee to meet mine, or if they can’t afford that, I will lower mine to meet theirs.”

“Most of the time the people of color with whom I’ve done these actually charge more than me, or the same, so this becomes moot. But it has always been my policy that if the person of color would normally have made less, I insist on leveling the pay structure,” he said.