A restaurant in San Antonio, Texas, apologized after asking a police officer to leave the premises because he was carrying a gun.

The officer was asked to leave a Fogo de Chao Brazilian Steakhouse Saturday night, KSAT reported. Texas law states that establishments can’t deny service to an officer or special investigator who is carrying an authorized weapon.

The restaurant apologized to the San Antonio Police Department and to the officer Sunday. (RELATED: ‘Police Haters’ Taunt Officers At Scene Of Line-Of-Duty Shooting That Killed Female Rookie)

“We sincerely apologize to the San Antonio Police Department and the officer in question for the incident that occurred at our restaurant last night,” the statement read according to KSTA. “Unfortunately, a member of our team made the wrong call. We are working hard to address and correct this unfortunate lapse in judgement.”

“We will address the policy internally and make sure our team members are clear. We support, respect and appreciate everything our law enforcement does to keep each and every one of us safe, day in and day out.” 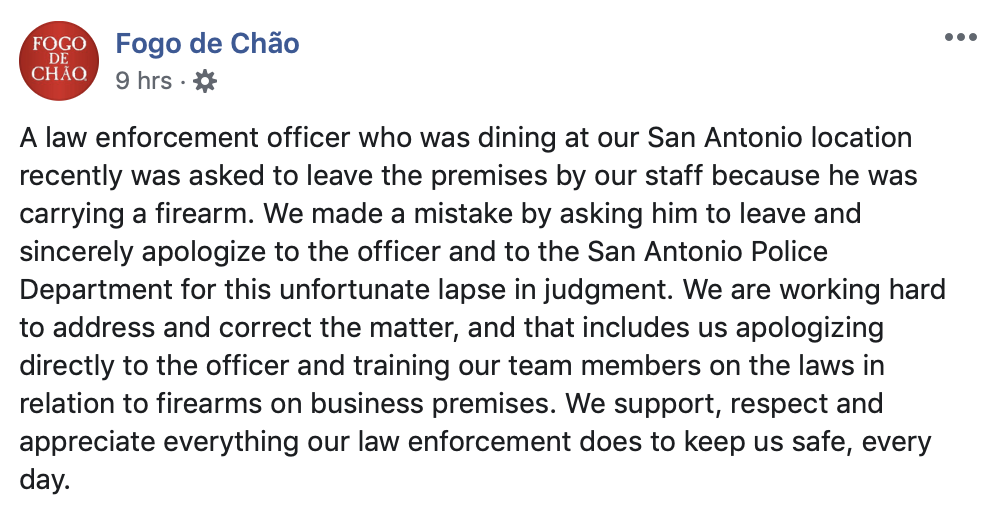 Fogo de Chao issued an apology after an armed officer was asked to leave its restaurant. (Screenshot Facebook/Fogo de Chao)

People who saw the incident take place at the restaurant took their concerns to social media, KSAT reported. Detective Mike Helle, president of the San Antonio Police Officers’ Association, said that the restaurant did not act appropriately.

“They would have been in the right if it was just a private citizen carrying like that, but the law is very specific when it comes down to a police or peace officer,” Helle said, according to KSAT. “They kind of made a boo-boo on this one, and the officer could have held his ground but he didn’t because he didn’t want to cause a scene.”

After the apology was issued, Helle stated that this could be a learning situation to teach the public about state gun laws, Fox News reported.

“We thank the owners of Fogo de Chao Brazilian Steakhouse for acknowledging the mistake by one of their employees and for issuing a statement of support of San Antonio Police Officers,” said Helle. “While we hope this wasn’t an example of anti-police bias, at the very least this incident shows that public-serving establishments need to be better educated about state gun laws, particularly as they apply to Police Officers.”