A producer for Qatar’s state-run Al Jazeera’s English-language channel helped perpetuate a dangerous lie about a “three year old” from a Palestinian neighborhood in East Jerusalem, who she claimed was summoned “by Israeli forces for interrogation after he was accused of throwing a rock at a house.”

On Tuesday, Linah Alsaafin tweeted, “Three yr old Mohammed Alayan from Issawiya, Jerusalem, was summoned by Israeli forces for interrogation after he was accused of throwing a rock at Israeli military jeeps. Israeli army raided his house last night in attempt to detain him (again, a 3yr old) but family stopped them.”

Linah Alsaafin’s tweet is par for the course for the news network’s attempts to propel misleading stories about the Israel-Palestinian conflict in an attempt to delegitimize Israel. Her tweet is also byproduct of the vast Boycott, Divestment and Sanctions (BDS) movement which seeks to undermine the Jewish-majority secular nation. Alsaafin also got Mohammed Rabi Alian’s age wrong. He is not three. He is four. (RELATED: Al Jazeera Gets Twitter To Silence Critics Of Its Video Implying Jews Benefited From Holocaust)

A video about the incident in East Jerusalem went viral. According to the Jerusalem Post, “Wadi Hilweh Information Center, a Palestinian watchdog agency, posted a video of the four-year-old crying as he was carried by his father. This video was real, but the cause of the tears were fake.”

In Israel, it is illegal to arrest any child under the age of 12. It is also illegal to interrogate any youth under 12 years of age as a suspect or to bring them to trial. Israel is also a signatory to the UN’s Convention on the Rights of the Child [UNCRC], which states that “children should be arrested, detained or imprisoned only as a last resort and for the shortest time possible.”

Only Mohammad’s father was summoned to remind him of his responsibilities over the child he brought with him in an attempt to create a media firestorm.

Al Jazeera wasn’t the only group to push this fake news.

Mahmoud Abbas’s own Fatah even wrote about the incident over social media and perpetuated the lie: 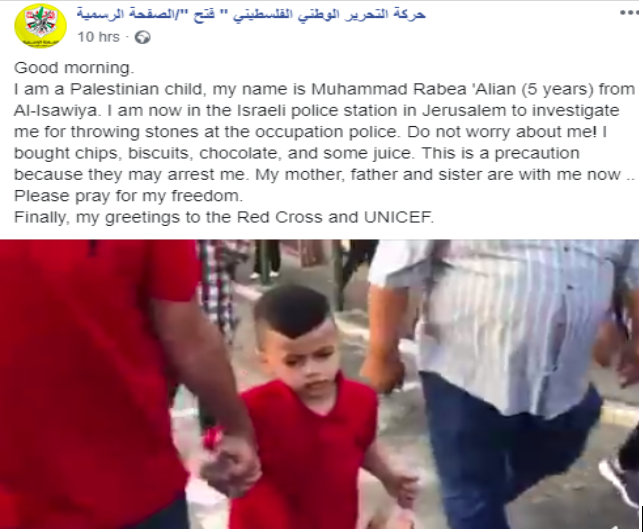 Mohammad’s own father admitted in an interview with the Palestinian news agency Ma’an News, that he had also lied to his son about where they were going and told him they were going on a “swimming trip” instead of to the police station where his father – not Mohammed – was summoned for questioning. “This morning I said to my child Muhammad ‘I will take you to a swimming trip.’ I could not explain what happened,” he reportedly said.

Israel Police also intervened to set the record straight. “Contrary to the claim, because the minor was under the age of criminal culpability the police who arrived at the scene served a summons to the father only to come for a discussion at the police station in order to warn him about and clarify with him the actions of his son,” the IP tweeted in response to MK Ahmad Tib, a Knesset member who attacked the police for allegedly summoning the 4-year-old for questioning. (RELATED: Al Jazeera Celebrates ‘Pride’ While Its State Backer Qatar Continues To Punish Gays)

The Israeli Police added, “Contrary to the claim, because the minor was under the age of criminal culpability the police who arrived at the scene served a summons to the father only to come for a discussion at the police station in order to warn him about and clarify with him the actions of his son.”

Yoseph Haddad, a well-known Christian Arab Israeli who served in the Israel Defense Forces (IDF), posted on Facebook about the incident, saying that media reports about Mohammed being summoned for questioning were “fake news” and “a lie.” Haddad wrote the post in Hebrew, English and Arabic. “[T]here has been a wave from the Arab Knesset members who choose to distort the facts, and distribute fake News about the boy himself being summoned for questioning! That’s a lie!” he wrote.

“It has already been shown that the child was not summoned for questioning but his father was the one who was summoned (and took his child with him for the purpose of false propaganda),” Haddad continued, “but it does not stop the Arab Knesset members from spreading these lies, exploiting them for anti-Israeli incitement and some also increasing to do it, and tweeting about it in English to create a negative image of the country in the world. the Arab Knesset members are a major factor in the rift between Jews and Arabs in the country.”

Al Jazeera showed its anti-Semitism recently when it tweeted a Holocaust denial video on its Arabic and English-language social media accounts in late May.