CNN moderators asked no questions about a number of notable topics during Tuesday’s Democratic debate, including abortion, rising tensions with Iran, Russian interference and regulation of big tech companies.

The 2020 presidential candidates, however, spent a significant amount of time arguing over the merits and pitfalls of Medicare for all, and the group touted their plans to combat climate change. Immigration, racial injustice, and gun control were also covered over the course of the more than two-and-a-half-hour–long debate.

But the topic of abortion was absent, and contention surrounding abortion access has heightened in recent months.

Not one question about reproductive health & rights at tonight’s #DemDebate.

If you could ask the candidates a question about reproductive health care, what would it be about?

Alabama passed a near-total ban, while 10 other states have begun to introduce restrictive abortion legislation in 2019, according to the Guttmacher Institute. Meanwhile, Georgia, Mississippi, Ohio, Louisiana and Kentucky have passed laws banning abortion after a fetal heartbeat can be detected, with limited exceptions. 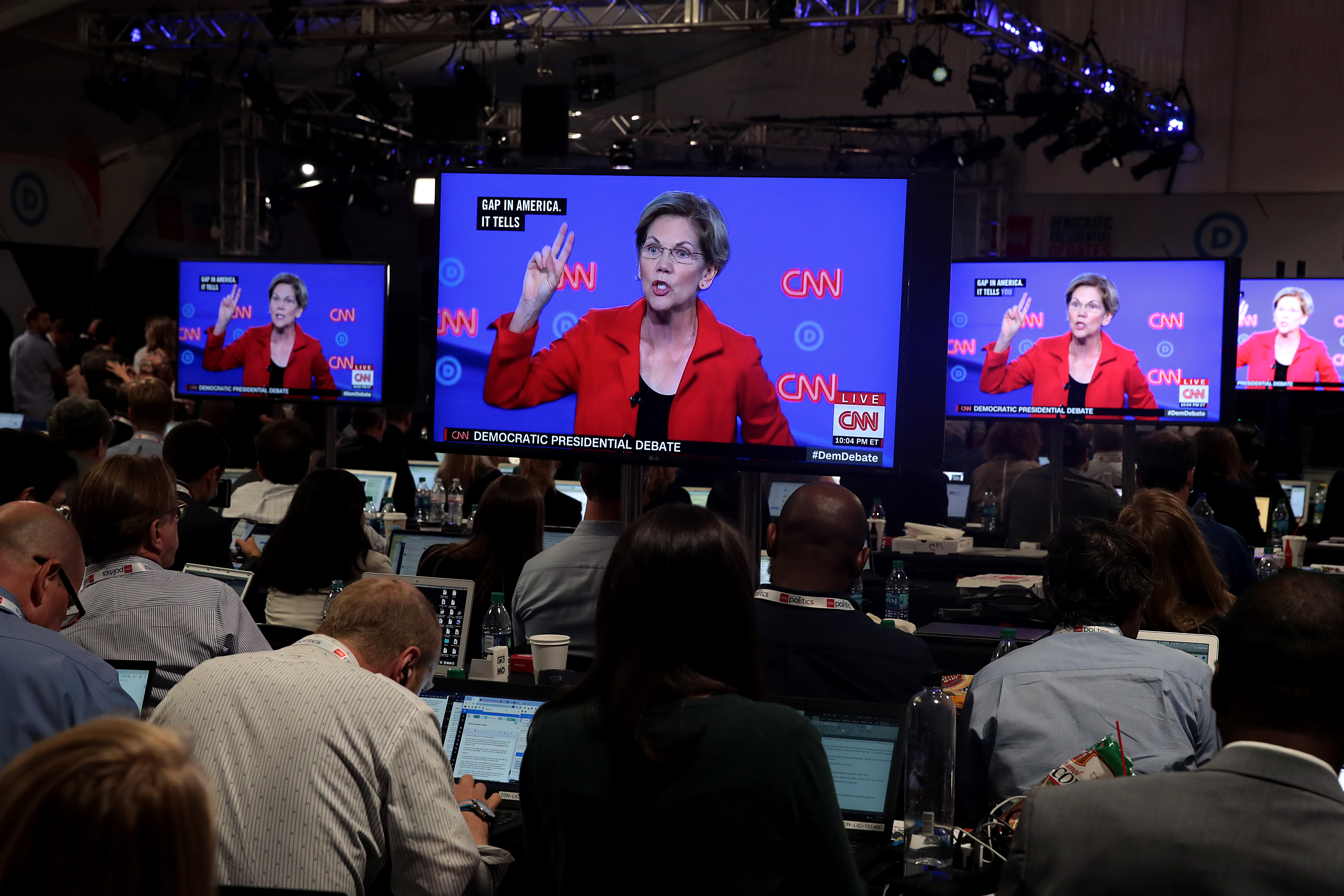 Wear cites polls showing that “as many Americans identified as pro-life as pro-choice, a 17-point swing from Marist’s similar survey just a month earlier” and that 73% of women want abortion to be restricted to the first three months. He also wrote that 42% of Hispanic individuals, 36% of African-Americans and 46% of Americans with an income under $50,000 support the Hyde Amendment, which bars federal funds from paying for abortions in most instances.

Discussions surrounding Russian interference were also absent at Tuesday’s debate in Detroit, despite that Senate Majority Leader Mitch McConnell fended off criticism that he was aiding Moscow by blocking an election security bill.

Additionally, claims from Democrats that President Donald Trump colluded with Russia during the 2016 election have plagued the Republican throughout his tenure. Special counsel Robert Mueller’s two-year investigation concluded with no evidence that Trump and his campaign colluded with Russia.

Similarly, there were no substantive discussions regarding Iran during Tuesday’s debate, though tensions between the nation and the U.S. have been on the rise.

Over the past few weeks, Trump said the U.S. shot down an Iranian drone, and there have been reports that Iran has increased its uranium enrichment. Meanwhile, European Union leaders have met to discuss how to approach Tehran apparent depart from the 2015 nuclear deal.

And while Big Tech has been a popular talking point among the 2020 Democratic presidential candidates, the issue was not mentioned during Tuesday’s debates.

Massachusetts Sen. Elizabeth Warren, for example, has called for the breakup of big tech companies like Facebook, Google and Amazon. (RELATED: House Democrats Announce An Antitrust Investigation Into Big Tech)

“Today’s big tech companies have too much power — too much power over our economy, our society, and our democracy,” Warren wrote in a blog post March 8. “They’ve bulldozed competition, used our private information for profit, and tilted the playing field against everyone else. And in the process, they have hurt small businesses and stifled innovation.”

The San Francisco Chronicle noted May 31 that Warren’s campaign received $30,000 from donors at Google parent company Alphabet and nearly $22,000 from Apple, Yelp and the Chan Zuckerberg Initiative.

“Many of the candidates are trying to have it both ways, but it will be hard to be taken seriously as strong on this issue when you’re taking money hand over fist from Big Tech,” Democratic strategist Rebecca Katz told the NYT in June.

EDITOR’S NOTE: This article has been corrected to reflect that the Chan Zuckerberg Institute is an independent philanthropic organization separate from Facebook.