A visibly frustrated former Vice President Joe Biden declared during the second night of the CNN presidential debates, “everyone’s talking about how terrible I am on these issues!”

Biden was referring specifically to his record on criminal justice reform and policing, but his statement could have applied to just about any of the policy issues covered during Wednesday night’s debate.

The other Democratic candidates on the debate stage, particularly the progressives, took advantage of Biden’s relatively weak performance in last month’s NBC debate, targeting what they viewed as wounded prey. Biden’s polling plummeted after California Democratic Sen. Kamala Harris panned him for his position on school busing during that debate, dropping to just 27% in the RealClearPolitics average. That was his lowest average since he launched his campaign. (RELATED: Joe Biden’s Lead Plummets In Post-Debate CNN Poll)

However, Biden also had a month to prepare for the likely attacks from his opponents, and his polling recovered significantly in that time, rising back up to 33%. Biden’s partial recovery made his opponents’ critiques all the more urgent, leading to aggressive onslaughts on major policy issues.

“Go easy on me, kid,” Biden requested of Harris on a hot mic before the start of the debate.

Biden did apparently learn from the first debate, and decided to go on offense against Harris, knocking her for taking several tries to come up with a health care plan that is still costly and anti-choice.

“The senator’s had several plans so far. Any time someone tells you you’re going to get something good in 10 years, you should wonder why it takes 10 years,” Biden said. “If you notice, there is no talk about the fact that the plan in 10 years will cost $3 trillion. You will lose your employer-based insurance and in fact, you know, this is the single-most important issue facing the public and to be very blunt and to be very straightforward, you can’t beat President Trump with double talk on this plan.”

Harris finally released her Medicare-for-all plan this week after seemingly flip-flopping multiple times on what exactly she supports. During the last debate, Harris raised her hand in support of eliminating private insurance, only to later claim that she misunderstood the question. 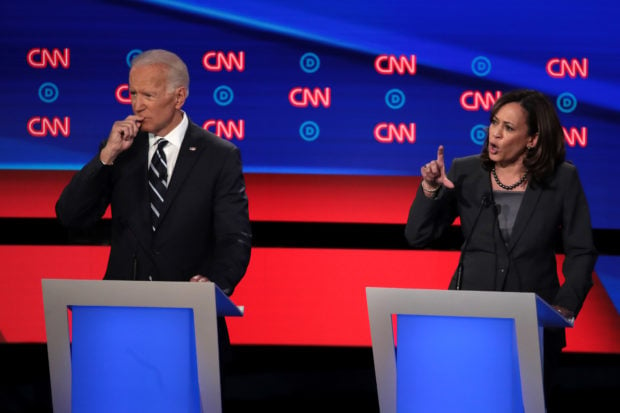 Alternatively, Biden’s plan builds on the Affordable Care Act (ACA) and promises to allow Americans to keep their private and employer-based health insurance plans. Progressives say Biden’s plan doesn’t go far enough, and they made that quite clear in response to his criticism of Harris.

“Vice President Biden, you’re simply inaccurate in what you’re describing,” Harris replied. “The reality is that our plan will bring health care to all Americans under a Medicare for all system … Under our plan, we will ensure everyone has access to health care. Your plan, by contrast, leaves out almost 10 million Americans.”

In fact, Hawaii Rep. Tulsi Gabbard even tried and failed to turn the attention away from Biden by attacking Harris herself, but Harris immediately went back to her chief opponent.

As the debate rolled close to its first full hour, Biden and Harris were still at each other’s throats on health care.

Biden’s record on immigration during the Obama administration proved to be another red-meat line of attack for his progressive opponents — including the audience.

As Biden attempted to defend his position that illegal immigration should continue to be a criminal offense, a group of protesters chanted “3 million deportations,” referring to the Obama administration’s high levels of deportation of illegal aliens.

“If you cross the border illegally, you should be able to be sent back. If we let people in, what should we say to the other immigrants wanting to come to the U.S. around the world? … People should have to get in line,” Biden said.

His view that immigrants should contribute to the United States and that they have to come through legally rankled former Department of Housing and Urban Development (HUD) Secretary Julian Castro, who declared, “What we need are politicians who have guts on this issue.”

Biden shot back that Castro never raised any concerns about immigration when he was serving in the Obama administration, adding, “I have enough guts to say his plan doesn’t make sense.”

“No, Mr. Vice President, we are not just going to let people cross the border,” Booker asserted.

Booker didn’t let off the pedal, instead segueing directly into points about Biden’s history of tough-on-crime policies, particularly his key role in the 1994 crime bill that critics say led to mass incarceration. As Booker pointed out, Biden bragged about his name being on crime bills since the 1970s.

Biden’s sole defense was to piggyback on Obama’s legacy as the first black president, stating, “Everyone’s talking about how terrible I am on these issues … Obama knew who I was.” 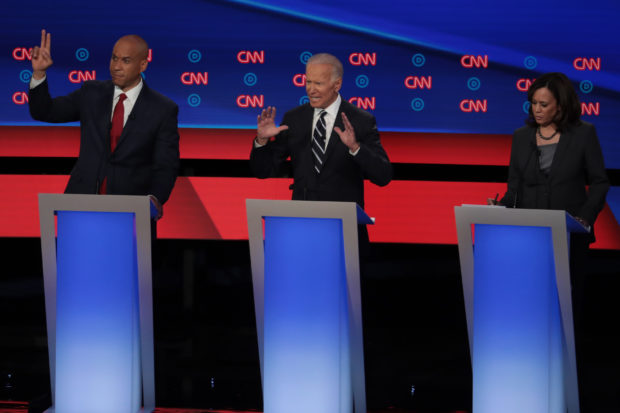 Harris chimed in by going back to the busing issue that she destroyed Biden for during the first debate, insisting that she would not be a senator and that Obama would not have been president if it weren’t for school desegregation through federally mandated busing.

However, the issue quickly turned around on Harris when Gabbard offered a succinct takedown of Harris’ work as attorney general and a public prosecutor in California. Gabbard smoked Harris for putting “1500 people in jail for marijuana offenses and then laugh[ing] about smoking it herself,” for withholding evidence that would free a man on death row and for holding people in California beyond their sentences. (RELATED: Tulsi Demands Kamala Harris ‘Apologize To People Who Suffered Under Your Reign’)

Gillibrand finally snuck in her own jab at Biden during a debate on equal pay, demanding to know what Biden meant when he said that women working outside of the home deteriorates the family. However, Biden struck back with venom, pointing out that Gillibrand accompanied him to women’s events on college campuses while he served in the Obama administration.

“I don’t know what happened except that now you’re running for president,” Biden slammed.

Harris jumped in to defend Gillibrand by pointing out that Biden flip-flopped on the Hyde Amendment, an amendment that prevents federal funding of abortion. Biden responded by asserting that he supports a women’s right to choose and alleged that climate surrounding the abortion issue has changed since he supported the Hyde Amendment. (RELATED: 2020 Dems Attack Biden For Supporting The Hyde Amendment, But They Voted For It Too)

Not one to miss out on the action, Washington Gov. Jay Inslee slammed Biden for his “middling” climate plan, a $5 trillion plan that calls for zero net carbon emissions by 2050. Biden attempted to appease the left with his plan, even ripping off parts of it from climate advocacy organizations. It wasn’t enough for the progressives on stage, who accused him of not taking the alleged climate crisis seriously.

Others on the stage have signed onto the Green New Deal or have authored their own plans that call for the elimination of all fossil fuels.

“Your plan is just too late,” Inslee said. “Get off coal to save this country.”

“I have to agree with Gov. Inslee,” Harris said.

The Democrats on stage went so far left on the climate, that Biden even had to defend himself from allegations that he was being too “realistic” with his plan.

“I’ve heard you say we need a realistic plan,” Inslee said to Biden, a charge he resisted.

While Biden was the go-to punching bag of candidates during the debate, he was not left speechless or stuttering to defend himself like in the NBC debate. And by ganging up on Biden, the progressives on stage further solidified his role as the front-runner.