A group of witches and magicians on Reddit have recently pioneered a new form of activism in favor of author Marianne Williamson: the “occult task force.”

The group hopes magic will help boost the candidacy of its preferred 2020 Democratic candidate, New Age spiritualist Marianne Williamson, according to the Washington Post. Group members have shared memes and performed synchronized “gestures” to help Williamson get airtime in Tuesday’s debate and in the race to follow.

“The whole orb gang community is tapping into the power of memes to reflect back on, and multiply, the sort of pulsing undercurrents of our collective unconscious,” the person who organized the group, speaking on the condition of anonymity, told the Washington Post. (RELATED: Marianne Williamson Torches Debate Stage: ‘I Almost Wonder Why You’re Democrats’)

Online supporters of Williamson —the “Orb Queen”— refer to themselves as the “Orb gang.” The term is a reference to an April monologue on Williamson by Virgil Texas of the popular left-wing political podcast Chapo Trap House. Texas urged his listeners to “pierce the veil of reality and observe the realm beyond, full of glimmering orbs.”

Williamson has made waves since her performance at the first Democratic presidential primary debate, when online commentators were captivated by her impassioned vow to “harness love.” The next day saw Twitter users overjoyed by some of Williamson’s unearthed old tweets, full of phrases such as “James Cameron deserves a Nobel Peace Prize” and “Pour God’s love on our immune systems.”

The “Orb Queen” continues to receive attention and win praise in the wake of the second Democratic debate Tuesday, and she was the most-searched candidate on Google during the debate. 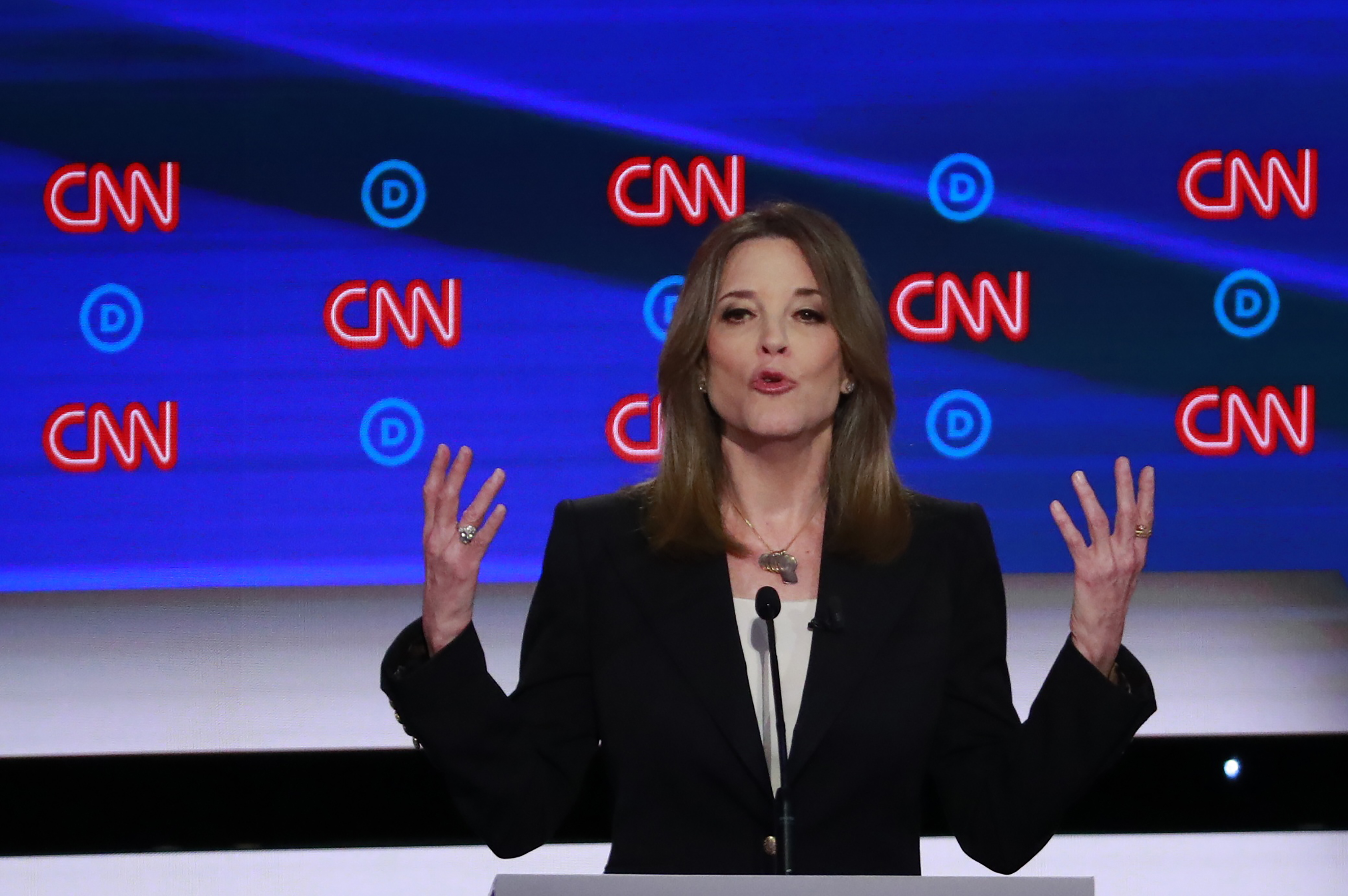 Before her run for president, Williamson was a self-help guru, an anti-poverty and pro-peace advocate, an advisor to Oprah Winfrey and the author of four New York Times best-selling books. Her philosophy is syncretic, drawing on ideas from the Jewish faith into which she was born and a number of New Age thinkers, chief among them the author of 1976 esoteric text A Course in Miracles, according to the Washington Post.

Williamson became famous in 1992 with the publication of A Return to Love, an interpretation of the 1976 text which posited that contemporary gloom could be overcome by kindness and self-love, according to the New York Times.

Occultists and mystics are drawn to the tangled web of spiritual ideas Williamson champions, though a read through popular pro-Williamson Reddit pages indicates that they make up only a small part of the orb gang. The Williamson campaign told the Post that it is “very, very concerned with the word occultist.”

“I’m 100 percent convinced Marianne is gonna be our next president,” tarot card reader Victoria Santapau wrote on the forum, according to the Post. “No other Democratic candidate is utilizing chaos magic principles like she is.” (RELATED: The Marianne Show: Every Viral Moment You Need To See From Night 1 Of CNN’s Democratic Debate)

The organizer of the “occult task force,” whose Reddit account is now deleted, told the Post that 13 chaos magicians, witches and energy workers used magic to boost Williamson’s 2020 presidential campaign, or to “help Marianne’s power rise,” in the words of the Reddit page.

The Daily Caller reached out to those who commented with their support on the occult task force page. Those who responded pushed back against the notion that the task force represented something nefarious.

“Occult simply refers to the mystical,” user “mothersformarianne” said. “This can be anything from envisioning her speaking clearly to praying for a clear mind and heart. For me, this meant joining other supporters in an affirmative prayer that she be successful in her debate performance.”

Another user, Simon Thornton, argued that Williamson is an ideal presidential candidate for adherents of any faith, occult or not.

“I think for anyone in the occult or various nonmajor religions, or hell, even major religions like Islam and Christianity, she is a great candidate,” Thornton told the Daily Caller. “Marianne Williamson is worried about the collective moral and spiritual health of this nation and the people that inhabit it. Her brand of spirituality appeals to all who try to adhere to ethical systems because it discussed primarily the universal values that they all share.”